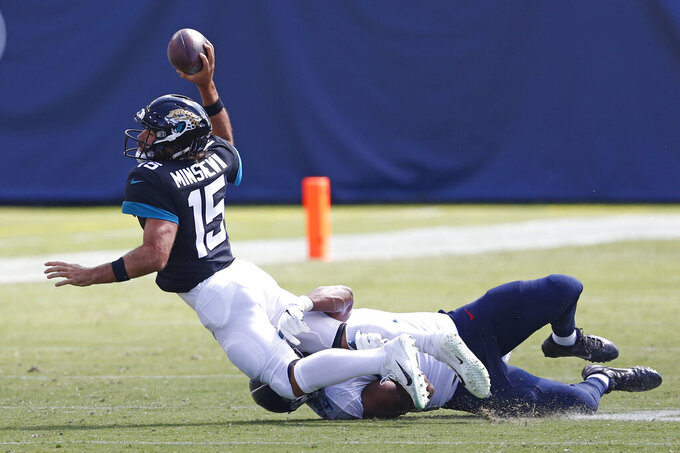 The idea has merit: Take teams you don't expect to be in the playoff chase and stick them in prime time early in the schedule.

That's what the NFL has done by placing Cincinnati at Cleveland last week, and this Thursday night, it's Jacksonville hosting Miami. Denver and the Jets get the honor next week before some of the big boys take the stage.

That doesn't mean Dolphins-Jaguars will be a total dud. Miami has been somewhat competitive in division losses to New England and Buffalo. Jacksonville, led by the dynamic play of quarterback Gardner Minshew, has been a whole lot more than that, stunning Indianapolis and falling at Tennessee late in the game.

“I think there’s been some opportunities for us to make plays and we haven’t made them — a couple of dropped interceptions, lost edges, a couple of missed tackles," Dolphins coach Brian Flores said. "There’s never just one thing, but I think we’ve had some opportunities. We need to take advantage of them.

“We try to stress how important every play is because you never know which one is going to be the one that changes momentum or makes a shift in the game.”

North Florida is a 2 1-2-point favorite over South Beach.

KNOCKOUT POOL: Buffalo and Green Bay kept us going in the first two weeks. It's the turn of INDIANAPOLIS now.

The Indiana Hoosiers probably would be favored over the inept and banged-up Jets.

By far the toughest opponent the Bills have faced in September.

Both defenses took punishment last week. More of the same ...

The Pack has been dynamic in wins over division rivals. Not so easy in the Big Easy.

The Ravens are the more complete team right now. January might be different.

No way the Raiders can be as stoked as they were for a home-opening win over the Saints.

This line should be much higher, which scares us away from Best Bet.

Another strangely low line, but this one doesn't scare us.

The Niners were bothered by the turf at the Meadowlands in a win over Jets. The turf might be their biggest nuisance again.

Denver has been struck by a bunch of injuries.

Cleveland made a nice turnaround vs. Cincinnati. Washington made the opposite turnaround.

It's already getting ugly in the City of Brotherly Blame, uh, Love.

How many onside kicks should the Bears try in the ATL?

The Panthers have been far more competitive than predicted. It's early.

Are the Vikings really this bad? We need more convincing.