49ers overwhelm Panthers to improve to 7-0 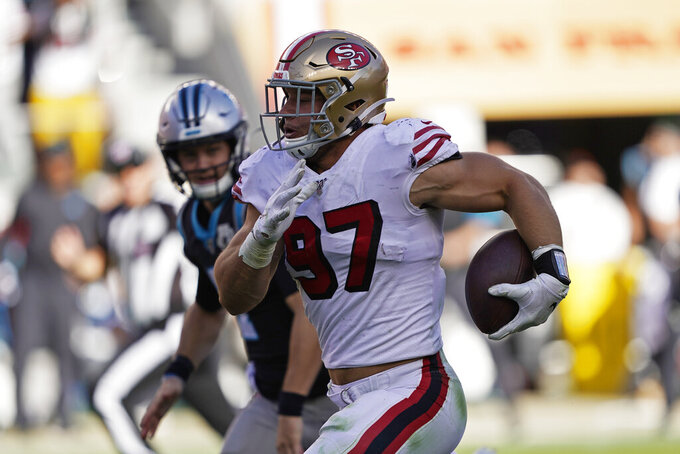 San Francisco 49ers defensive end Nick Bosa runs with the ball after making an interception during the second half of an NFL football game against the Carolina Panthers in Santa Clara, Calif., Sunday, Oct. 27, 2019. (AP Photo/Tony Avelar)

After racing out to six straight wins against mostly lesser competition to start the season, the Niners delivered their most complete performance yet in a 51-13 victory over Carolina on Sunday, snapping the Panthers' four-game winning streak.

"In the NFL, you never expect to just blow someone out like that, especially a good team like that," Shanahan said. "They're a real good team. They're a team who will be around at the end of the year. They can run the ball. They play really good on defense. Our team was just ready to go. Everything was clicking."

That's the way it has been going all season for the Niners (7-0), who have won their first seven games for just the second time in franchise history. The only other time it happened came in 1990 when they started 10-0 after winning the Super Bowl the previous two seasons.

But with a relentless defense that had seven sacks and three takeaways against Carolina, a dynamic running game and just enough plays out of Jimmy Garoppolo at quarterback, the Niners are one of two remaining undefeated teams along with defending champion New England.

"The more games you win, the more confidence guys get." Shanahan said. "Just like the more games you lose in a row, the less confident you get. Both can be a little bit contagious to the team and I think our guys, we've won a lot of different ways."

The Niners had another strong game on the ground led by Tevin Coleman, who had 11 carries for 105 yards and three scores to go along with a touchdown catch. Raheem Mostert also scored on a 41-yard run and Deebo Samuel scored on a 20-yarder. The five TD runs were the most for the 49ers since they had five against Atlanta on Oct. 18, 1992. San Francisco has 1,268 yards rushing for their best total after seven games since 1988 and rank second in the league with 181.1 yards per game on the ground.

About the only thing that went wrong for the 49ers was allowing two long runs to Christian McCaffrey. He scored Carolina's lone TD on a 40-yard run and also had a 37-yarder. McCaffrey was held to 40 yards on his other 12 carries.

Rookie defensive end Nick Bosa had another dominant performance, finishing with three sacks and an interception. He joined Kevin Williams (2003) and Julius Peppers (2002) as the only rookies to do that since sacks became an official stat in 1982. Bosa's three sacks were the most for a 49ers player since Aldon Smith had 5 1/2 against Chicago in 2012 and his seven sacks in his first seven games are tied for the second most all-time to Mark Anderson's 7 1/2 for Chicago in 2006.

The addition of Emmanuel Sanders dropped Dante Pettis down in the pecking order at receiver. Pettis played only 20 offensive snaps and had one catch for 5 yards on three targets. The 2018 second-round pick has just 10 catches for 88 yards this season.

Running back Matt Breida left the game with an ankle injury and would have been limited if the team practiced. Left tackle Joe Staley could return this week for the first time since breaking his leg in Week 2.

100. The Niners have held the past four opponents to 100 yards or fewer passing, marking the first time any team has done that since 1977 when San Francisco and Atlanta both did it. The 128.7 net yards passing per game allowed by San Francisco is the lowest mark in the NFL through seven games since Minnesota allowed 113.1 in 1989.

The 49ers have a quick turnaround before visiting Arizona on Thursday night. San Francisco has lost eight straight to the Cardinals.