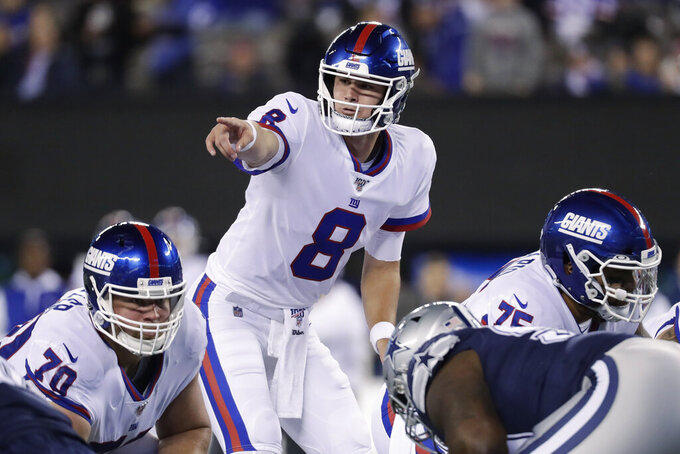 New York Giants quarterback Daniel Jones (8) calls an audible at the line of scrimmage during the first quarter of an NFL football game against the Dallas Cowboys, Monday, Nov. 4, 2019, in East Rutherford, N.J. (AP Photo/Adam Hunger)

EAST RUTHERFORD, N.J. (AP) — Forget about this being a battle for bragging rights.

When the Giants and Jets face off at MetLife Stadium on Sunday, the New York rivals will be simply looking to avoid embarrassment in what has been a downright miserable season so far for both.

"I can only speak for us, but we want to get this thing back on track," Giants wide receiver Golden Tate said. "I don't know if you guys can get a sense for this locker room, but we don't seem down and depressed. I don't feel like we've tanked, despite our record. I think we're still hungry to win and I think we still feel like we have a shot to do something special.

"We've just got to get it going, and it's going to start with us."

The Giants are 2-7 and on a five-game losing streak. It's the third straight season they've lost five in a row, including two such skids in 2017. They're trying to avoid their first six-game losing streak since 2014, when they finished 6-10.

And they'll have to do so against a Jets team that is 1-7 and coming off a 28-16 loss to previously winless Miami.

"There's not much we can say," Jets quarterback Sam Darnold said. "I mean, 1-7 is not a good spot to be in, but all we can do is continue to come back to work and grind."

Both fan bases are frustrated and some are calling for their teams to make coaching changes, the Giants with Pat Shurmur and the Jets with Adam Gase.

A loss by either side would really turn the heat way up on the coach's seats — and would also have many questioning whether the locker room could start turning.

"We have a bunch of guys that are fighters in there," Shurmur insisted, "so that doesn't concern me."

The Jets are saying similar things, despite their team being in the midst of a start that has them in dubious company. It's the sixth time they've been 1-7, and first since 2014. Only the 1996 team under Rich Kotite was worse at 0-8 before finishing 1-15.

The teams' 3-14 combined record is the worst this late in a season in their series history.

For the record, both teams have been winless for their matchup once: in 1996, when they were each 0-3. The Giants won that one 13-6 at Giants Stadium.

Gase's reputation for being an innovative offensive mind hasn't quite played out so far in New York.

Injuries, inconsistency, poor game planning and spotty play by the quarterbacks and offensive line have all led to those dismal rankings.

"It's not fun by any means," Gase said. "I just keep trying to find ways to help our guys, put them in good positions, find ways to get them better, find ways to play clean football."

The Giants hoped Jones would be a league leader. They got their wish in his first season.

He's tied with Tampa Bay quarterback Jameis Winston for No. 1 in giveaways with 16. Jones has a league-high eight fumbles lost and eight interceptions. Winston has been picked a dozen times and lost four fumbles.

The Giants have 22 turnovers in nine games this season and are a minus-10 in the turnover differential, which is 30th in the league. Their 12 fumbles lost are a league high. A year ago, Shurmur's team lost seven fumbles all season and had 19 turnovers.

Darnold will see a familiar face looking across from him with defensive lineman Leonard Williams lined up on the Giants' defense.

Williams was traded by the Jets two weeks ago for a third-round draft pick and a conditional fourth-rounder. He was the No. 6 overall pick by the Jets in 2015 but hadn't been making as a big an impact as expected and wasn't expected to be re-signed after the season.

Williams was given a big role in his first game Monday night against Dallas. He was on the field for 47 of the Cowboys' 65 offensive plays and 55 overall, including special teams. He had one tackle, two assists and quarterback hit.

"He obviously knows the players on that team intimately," Shurmur said of the Jets. "But we just have to match up and play and not be too concerned about that."

Since Darnold's terrific performance against Dallas on Oct. 13 in his return from mononucleosis, the second-year quarterback has struggled mightily.

In the three games since, Darnold has thrown three touchdown passes and eight interceptions. He also has completed just 58.4% of his passes in that span.

"The last couple weeks, I've actually been seeing the field really well," he said. "It's just not getting the same results, but I'm seeing it well. Just got to keep staying consistent with watching tape and figuring out what they're doing."