Broncos inform Marshall they won't pick up his option 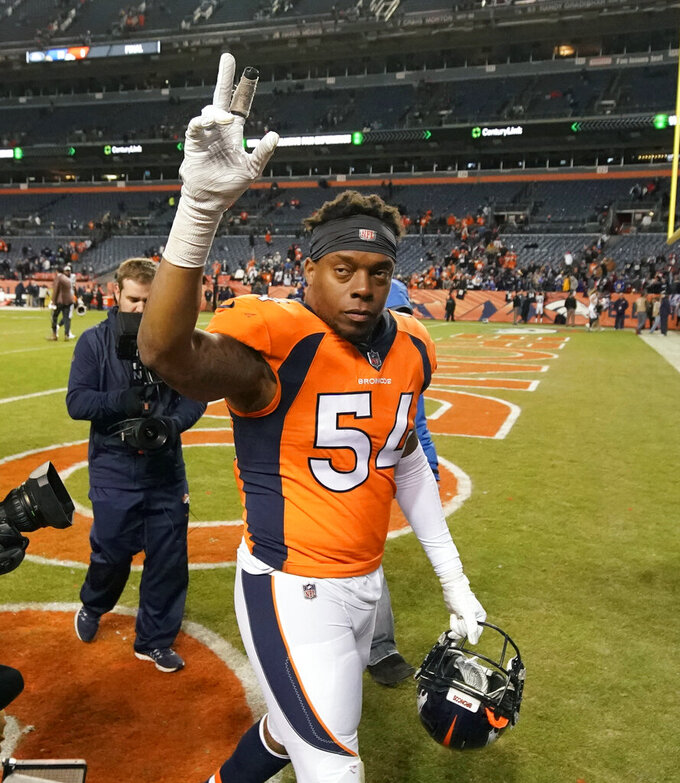 FILE - In this Dec. 30, 2018, file photo, Denver Broncos inside linebacker Brandon Marshall gestures after an NFL game against the Los Angeles Chargers, in Denver. Even though Brandon Marshall was expecting it, Friday's, Feb. 15, 2019, news that he'd probably played his last game in Denver threw him for a bit of a loop. "It's just different when it's in the news and everybody knows about it and it's not just you and your agent talking about it," Marshall said after the Broncos told his agent, Drew Rosenhause, they didn't plan to pick up Marshall's option. (AP Photo/Jack Dempsey, File)

ENGLEWOOD, Colo. (AP) — Even though Brandon Marshall was expecting it, Friday's news that he had likely played his last game in a Denver Broncos uniform threw him for a bit of a loop.

"It's just different when it's in the news and everybody knows about it and it's not just you and your agent talking about it," Marshall said after the Broncos told his agent, Drew Rosenhaus, that they don't plan to pick up the linebacker's option.

There's a possibility Marshall could return to Denver, but he said he's expecting to find interest on the open market when free agency opens March 13, even after limping through two injury-riddled seasons in the last three years.

"I'll be wanted. For sure. I'll be good," Marshall said. "All my options are open right now. Whatever's the best fit for me."

As for his health, he said, "I'm getting there," after missing more than a month with a bruised knee in 2018.

Marshall, who was due $6.5 million next season with a cap hit of about $9 million, has been limited to 11 games in two of the last three seasons.

In 2006, he missed five games with a torn hamstring. He started seven games last year and collected 42 tackles without a sack or an interception as rookie Josey Jewell's playing time increased.

Marshall said after the season ended that he wanted to finish out his career in Denver, where he got a second chance after getting cut three times by the Jacksonville Jaguars, who drafted him in the fifth round in 2012.

On Friday, Marshall said he'd been eager to work with new Broncos head coach Vic Fangio "seeing what he's done with linebackers and defenses over the years."

If this is goodbye to the Broncos, Marshall said he hopes fans remember him as a player who was passionate about his play on the field and his civic works .

"Oh man, just as somebody who gave it my all, that's how I hope I'm remembered," Marshall said. "I worked hard. I gave love. I showed love. On the field, off the field."

Marshall, who was the Broncos' Ed Block Courage award winner in 2015, launched FEEL (Feed & Educate to Empower Leaders) last year and founded the Williams Marshall Cares Leadership Program to help youth in Denver and his hometown of Las Vegas.

A college teammate of Colin Kaepernick at Nevada, Marshall was among the first group of NFL players who joined Kaepernick in kneeling during the national anthem in 2016 to bring attention to police brutality and social injustices in America. He met with the Denver police chief and the police union later that season.