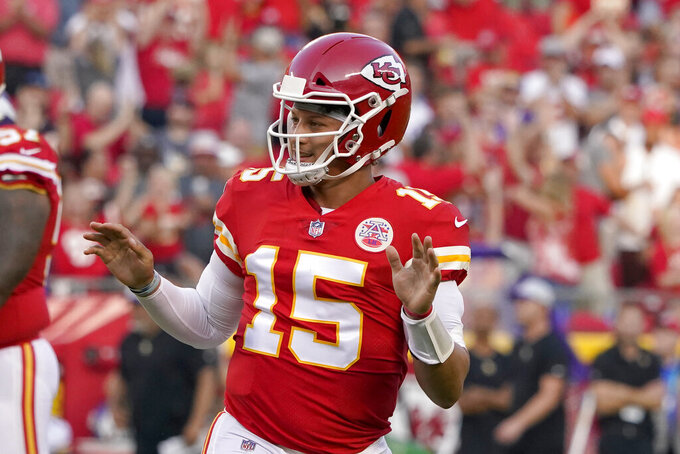 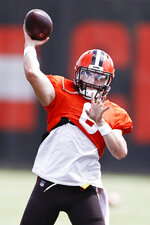 KANSAS CITY, Mo. (AP) — The Kansas City Chiefs have ruled the AFC for the better part of three seasons, making back-to-back trips to the Super Bowl and beating the San Francisco 49ers about 19 months ago for their first championship in 50 years.

The Cleveland Browns could offer the stiffest test to their perch at the top.

The two teams met in the divisional round of the playoffs last season, when Kansas City beat the Browns 22-17 in part by converting an audacious fourth-down pass play near midfield with just over a minute to go. And perhaps fittingly, they will start this season back at Arrowhead Stadium, where a full house is expected for the Sunday afternoon kickoff.

“I don't think you can go there right now,” said Chiefs coach Andy Reid, when asked about Super Bowl aspirations harbored by both teams. “You work on what you can control. That's the game plan and making sure we master that, and master the opponent, the best we can before game time. And once you get in the game, take care of each play.”

The Chiefs have certainly mastered the art of winning in September. They've won 14 consecutive games in the first month of the regular season, and quarterback Patrick Mahomes is 10-0 with 32 touchdown passes and no interceptions.

The Browns? They've gone an NFL-record 16 seasons without winning their opener, and they're 1-20-1 in Week 1 since they returned to Cleveland for the 1999 season. Last year was a particularly gruesome 38-6 loss at Baltimore.

“Obviously any time you're playing in the NFL, you're playing against the best of the best,” Browns quarterback Baker Mayfield said. “For us, it's about playing the guy in front of us and doing our job. ... For us, we erased last year. We're trying to start from Game 0 and move on from there.”

The personnel alone make Sunday's game one of the marquee matchups of Week 1.

Mahomes and Mayfield are two of the best quarterbacks in the league. The Chiefs have one of the best wide receivers in Tyreek Hill, the Browns counter with a healthy Odell Beckham Jr. and Jarvis Landry. Both teams have talented tight ends and running backs, to say nothing of playmakers on the opposite side of the ball.

The Browns signed Jadeveon Clowney to pair with pass rusher Myles Garrett, and cornerback Denzel Ward is among the best in the game. The Chiefs feature fearsome Chris Jones, who is moving from defensive tackle to defensive end, and have safety Tyrann Mathieu on the back end — assuming he is cleared of last week's positive COVID-19 test.

“They have a lot of good players,” Mahomes said, “that's the biggest thing. They have talented players at every position, a mixture of younger players and veteran players, and players that have made plays in this league for a long time.”

Beckham is expected to play for the first time since a season-ending knee injury in Week 7 last season. One of the NFL’s fastest players, Beckham made an equally speedy recovery and will likely start, giving Mayfield another option alongside Landry, tight end Austin Hooper and running backs Nick Chubb and Kareem Hunt.

“People forget how truly fast he is and to be able to take the top off defenses,” Mayfield said. “Safeties have to worry about that. Teams will have to defend it and pick their poison because we are a physical, run-first mentality team, and that is not going to change, no matter who we have out there at receiver."

“We’re in a great spot right now,” said Walker, who spent the past four seasons with Indianapolis. “Obviously not where we want to be, but where we’re at right now, I think we’re taking right steps in the right direction.”

The Chiefs scrapped their entire offensive line after it was dominated by Tampa Bay in the Super Bowl. They traded for Pro Bowl left tackle Orlando Brown Jr., signed standout left guard Joe Thuney in free agency, welcomed back right tackle Lucas Niang after he opted out of his rookie season and drafted center Creed Humphry and right guard Trey Smith.

That means they'll have three players protecting Mahomes on Sunday that have never played a regular-season NFL game.

The Browns will start rookie Greg Newsome II at cornerback while Jeremiah Owusu-Koramoah should get plenty of run at linebacker. The Chiefs will be counting on first-year linebacker Nick Bolton to replace Willie Gay Jr., who landed on injured reserve last week with a toe injury he sustained in the preseason.

The Chiefs were limited to 22% of capacity (about 16,500 fans) for home games last season, including that playoff matchup with the Browns. But there are no restrictions for Week 1 and a crowd of more than 75,000 is expected.

“The only time I’ve been in the stadium where it was full was the Garth Brooks concert,” said second-year Chiefs running back Clyde Edwards-Helaire. “It’s one thing sitting in the stands, but when you can put on a helmet and get on the field and the stadium is full, you have a different outlook. It’s going to be a surreal feeling.”