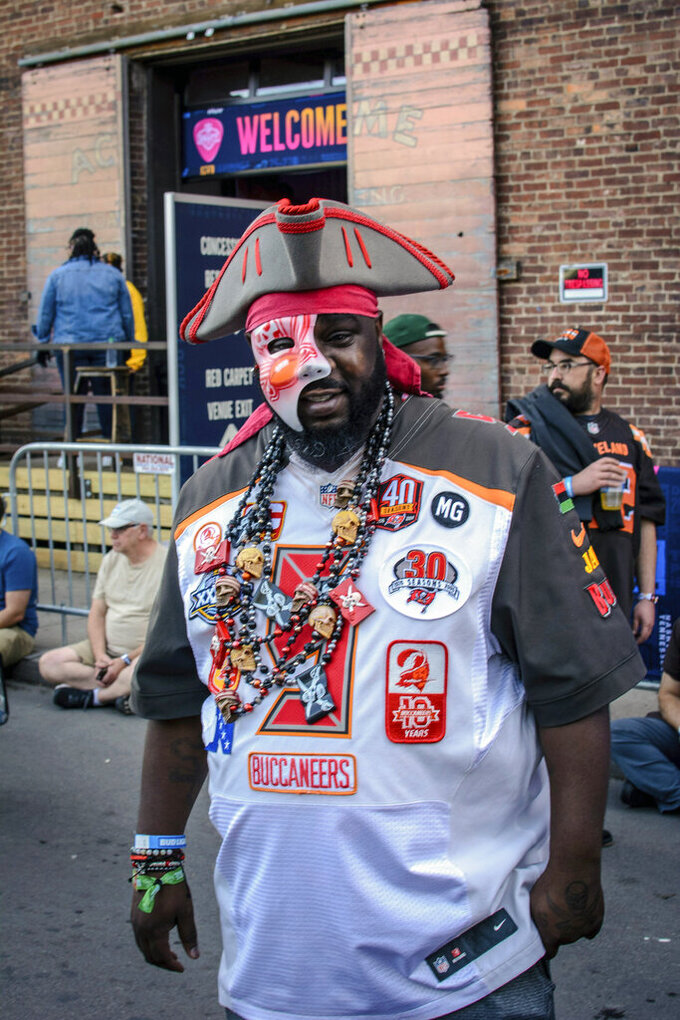 Tampa native and Buccaneer fan Jamal Sanders supports his team during the NFL Draft, Friday, April 26, 2019 in Nashville, Tenn. While it isn't unusual for fans who cheer for the same teams to bond at the NFL Draft, several super fans in Nashville for Friday's second and third rounds have enjoyed getting to know fans of teams they will be rooting against when the season kicks off in the fall. (AP Photo/Jim Diamond)

TAMPA, Fla. (AP) — The Tampa Bay Buccaneers hope they're finally getting it right on defense.

After selecting linebacker Devin White in Thursday's first round, the Bucs reiterated their commitment to improving on defense by selecting Central Michigan cornerback Sean Bunting in the second round and Auburn cornerback Jamel Dean and Kentucky safety Mike Edwards in the third round on Friday night.

The Bucs were one of the NFL's most productive teams on offense last year but missed the playoffs for the 11th consecutive season because of an inconsistent pass rush and an inability to keep opponents out of the end zone.

New coach Bruce Arians and general manager Jason Licht are determined to change that, bringing in three potential starters in free agency and using the club's first four picks in this week's draft to bolster a unit that ranked 24th in total defense while allowing 29 points per game — second-most in the league in 2018.

"When Bruce came in ... we knew we had to address that side of the ball," said Licht, who's leading his sixth draft as Bucs GM.

The pass rush and a leaky secondary have been liabilities throughout the GM's tenure.

Including the three players added Friday, the Bucs have drafted six defensive backs since 2016, though Licht said that's not necessarily "an indictment on the players who are here."

"You're always trying to get better," he said, adding that a lack of depth in the secondary was a problem last season, when the Bucs finished 5-11 for the second straight year.

"Competition is a beautiful thing in this league," said the GM, who lured Arians out of retirement and back to the sideline in January.

Bunting was the seventh player taken in the second round, 39th overall. Dean and Edwards were selected 94th and 99th, respectively, with picks obtained when Tampa Bay traded No. 70 overall to the Los Angeles Rams.

Bunting is the first cornerback drafted out of the Mid-American Conference school in 34 years and the highest drafted player from Central Michigan since offensive lineman Eric Fisher was the No. 1 overall pick in 2013.

"It was just a blessing, honestly. I couldn't process the moment when it happened," Bunting said of getting the call from the Bucs. "I could only kind of smile and stare at the TV screen."

In Tampa Bay, he'll join White, Dean and Edwards as part of a potential fix for one of the NFL's worst defenses.

White, an inside linebacker out of LSU, was the fifth pick of the opening round. The Bucs selected him even though Josh Allen, the top-rated edge pass rusher in the draft, was still available.

Arians and Licht said the 6-foot, 237-pound White fits everything they were looking for in a leader and versatile defender.

"The tape speaks for itself," Arians said. "People say: 'You need a pass-rusher.' He's pretty good at that and we do like to blitz up the middle — quarterbacks don't like pressure up the middle. He fits everything that we want as a human being and as a football player. I really couldn't be any more ecstatic."

White and Bunting, who had nine career interceptions in college, will get an opportunity to compete for starting jobs as rookies in the new 3-4 scheme being installed by Bucs defensive coordinator Todd Bowles.

"I would say my best attribute is being able to take the ball out of the air," Bunting said. "I'm a ball hawk. I consider myself a receiving defensive back. That something I take pride in, taking the ball away and giving it back to the offense."