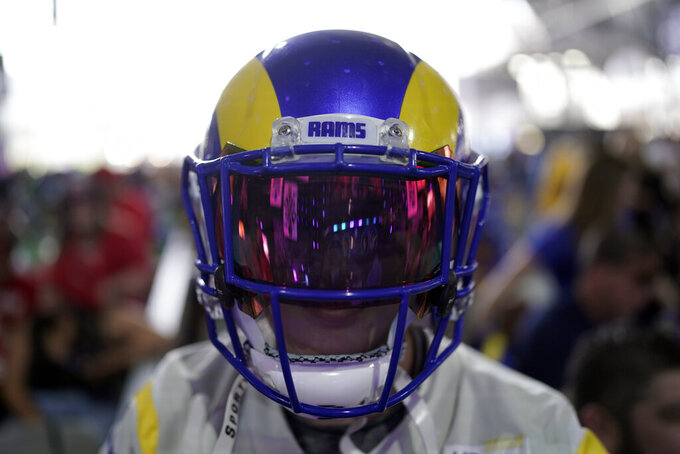 LOS ANGELES (AP) — The Los Angeles Rams won the Super Bowl 2 1/2 months ago despite fielding a secondary that didn't appear to be nearly as good as the previous season's group.

The Rams' front office also thought that room could use some upgrades.

On the third day of the NFL draft, the champs selected four defensive backs and reacquired a key pass defender from that 2020 juggernaut that led the league in total defense.

“(Defensive back) was definitely something we were going to strategically target,” general manager Les Snead said.

While they took their usual assortment of late-draft flyers on unsung or flawed prospects Saturday, the Rams’ biggest addition of Day 3 could turn out to be the return of defensive back Troy Hill. Los Angeles traded a fifth-round pick in 2023 to Cleveland for the dependable slot defender who played a key role on the Rams’ defense from 2016-20.

“He's a guy that played really good football for us, especially the first year we were running a version of this system (in 2020),” Rams coach Sean McVay said. “The overall production, the position flexibility, the ability to play the (slot) and be able to play outside — as they say, distance makes the heart grow fonder.”

With seven picks going into Day 3, the Rams used their first choice on South Carolina State cornerback Decobie Durant in the fourth round. They swung a trade with Las Vegas to move up 10 spots in the fifth round to grab Notre Dame running back Kyren Williams, a St. Louis native who turned out to be the only offensive skill position addition.

Bruss could end up as the Rams' starting right guard if he wins his camp competition. The rest of Los Angeles' draft class is likely to be depth for a team with plenty of veteran talent returning for another title chase.

The Rams' top pick at defensive back was Durant, a well-regarded and self-made prospect. He worked for FedEx after getting no scholarship offers out of high school, but he carved out a successful career with 12 interceptions at South Carolina State after originally walking on to the team.

“My emotions were through the roof,” Durant said. “I feel like my playing style is just being a gnat to the ball. Whenever the ball is in the air, it's mine, nobody else's. Just being a ballhawk.”

Williams was thrilled to land with his favorite team since childhood.

Williams said he “grew up in the Edward Jones Dome” attending dozens of Rams home games with a coach's season tickets. He was an enormous fan of franchise rushing leader Steven Jackson, even dressing up as the Rams star for Halloween.

“I was super excited in a way I can't even explain,” said Williams, who had back-to-back 1,000-yard rushing seasons with the Irish before turning pro.

The Rams struggled to replace Hill last season with a combination of David Long, rookie Robert Rochell and Dont'e Deayon. LA's needs in the secondary are even more pronounced now after the free-agent departure of starting cornerback Darious Williams for Jacksonville.

But Jalen Ramsey is on top of it: The All-Pro cornerback hailed Hill's return on Twitter — and then he instructed Rams fans to blow up Tyrann Mathieu's mentions in a bid to recruit the three-time All-Pro safety.

A theme among the four defensive back draftees was versatility: Yeast and Lake both can guard receivers in the slot, and Yeast spent three years at Louisville as a cornerback before transitioning to safety.

“It runs in alignment with our philosophy defensively where you're asking sometimes safeties to come down and cover (receivers),” McVay said. “The game makes sense to all of these players.”

Lake, the hard-hitting safety and Orange County native who blossomed at UCLA, is the 46th Bruins player drafted by the Rams. The list includes Hall of Famers Bob Waterfield and Tom Fears — both drafted in Cleveland shortly before the franchise's first move — along with Wendell Tyler, Flipper Anderson, Roman Phifer and even track star Rafer Johnson, a 28th-round pick as a running back prospect in 1959.

Lake is the son of longtime Pittsburgh defensive back Carnell Lake, but he says he is even more fully prepared for the NFL after playing under Chip Kelly, the former head coach at Philadelphia and San Francisco.