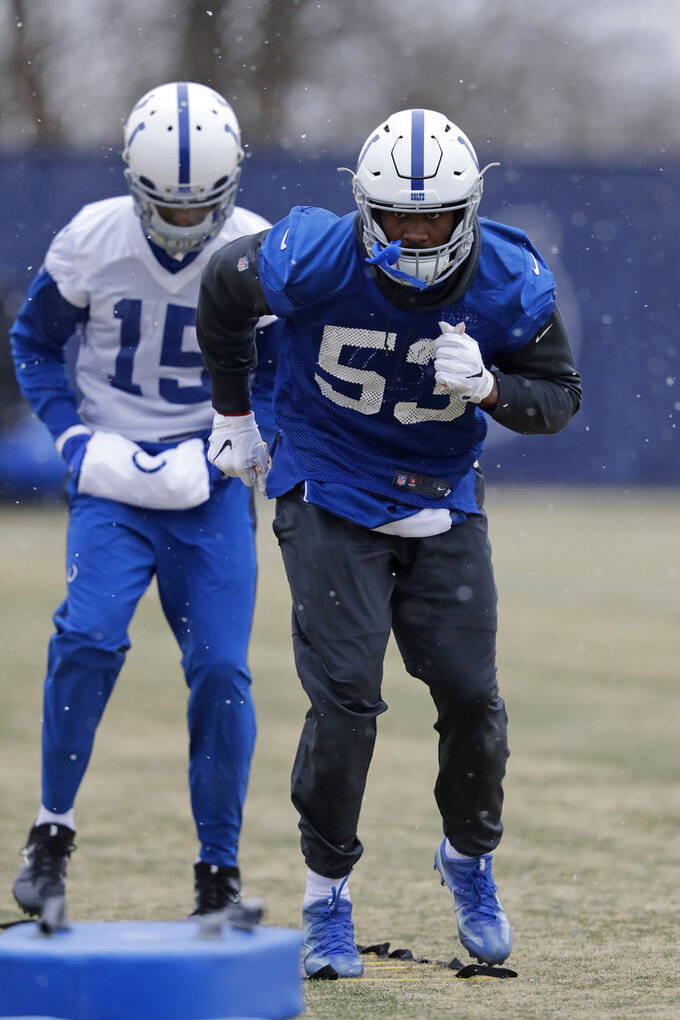 Indianapolis Colts outside linebacker Darius Leonard runs a drill during practice at the NFL football team's facility, Wednesday, Jan. 9, 2019, in Indianapolis. The Colts will play Kansas City in a AFC divisional round game on Saturday. (AP Photo/Darron Cummings) 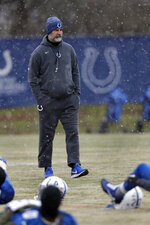 After six games, it had allowed an average of 30 points, had given up 37 or more points in three consecutive losses, was languishing near the bottom of the league's overall rankings and showed no sign of a turnaround.

Today, those performances are almost recognizable. Though the names remain essentially unchanged, the Colts overcame that dismal start and have emerged as one of the NFL's stingiest units and a key cog in Indy's playoff run.

"We feel good, we've been rolling," rookie linebacker Darius Leonard said. "We just want to keep it going. We want to keep everything rolling."

Leonard and his teammates face their biggest challenge yet in Saturday's divisional-round game at Kansas City. But the timing couldn't be better for a young, suddenly sturdy defense that still has plenty to prove.

Over the past six weeks, the Colts have given up 12.0 points per game, posted their first shutout in four years and ascended to No. 11 in the rankings. But many wonder whether the defense can hold up against the league's highest-scoring team.

So far, Indy (11-6) has passed every test. The defense has played a vital role in two five-game winning streaks. Indy is one of two teams that have not allowed a 100-yard rusher this season and have had at least one turnover in 16 of 17 games.

Outsiders have noticed the turnaround by a unit once regarded as a weak link.

"I think the players have bought in and they play hard," Chiefs coach Andy Reid said. "They're accurate with their assignments."

What's changed? Not much personnel-wise from opening day.

Defensive tackle Al Woods and linebacker Skai Moore both wound up on injured reserve. Margus Hunt moved from defensive end to defensive tackle and Pierre Desir claimed one of the starting cornerback spots. Otherwise, the lineup remained as consistent as Eberflus' message.

"When you keep doing the same things over and over again and you get good at the fundamentals of the game, then you can start adding a little bit to your package because the guys understand the basics," Eberflus said.

"You can never move on or never forget the basics of what your system is about. That to me is the hustle, the intensity, taking the ball away and being smart players."

Eberflus, initially hired by Josh McDaniels and retained by Frank Reich after McDaniels backed out of the job, scrapped the 3-4 defensive front from previous coaching staff and installed the Tampa-2 preferred by general manager Chris Ballard.

Reich was on board, too, remembering how the system helped the Colts win a Super Bowl during his first stint with the team.

The scheme relies largely on speed and trust and was a perfect fit for a team trying to rebuild. Only three full-time starters returned in the same spot this season while a fourth, Jabaal Sheard, moved from outside linebacker to defensive end, but the simplicity shortened the learning curve for everyone, including the youngsters.

And after six games, things started to mesh. Leonard became the breakout star, the pass rush became more consistent and the run defense tightened up.