Cowboys lose to another potential playoff team and are tied 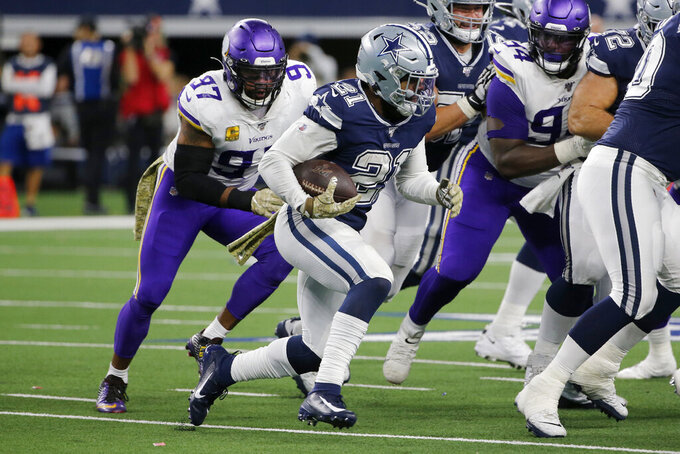 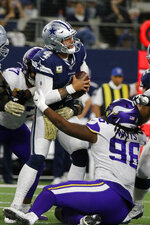 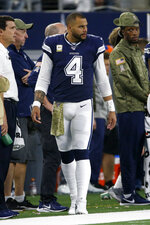 ARLINGTON, Texas (AP) — The Dallas Cowboys kept force-feeding the ball to running back Ezekiel Elliott while trying to make a late comeback.

Once a fourth-down pass to Elliott in the final minute fell incomplete, after he lost 3 yards and was stuffed for no gain on the previous two plays, the Cowboys were no longer alone atop the NFC East. They had again lost to another playoff-contending team.

After recovering from an early two-touchdown deficit to even have a chance, the Cowboys lost 28-24 on Sunday night to the Minnesota Vikings and their former defensive coordinator, Mike Zimmer.

"Make no mistake about it, Zim and the Vikings had everything to say about this tonight," Cowboys owner Jerry Jones said.

The Cowboys (5-4) fell back into a tie for the division lead with Philadelphia (5-4). The Eagles have won their last two games since losing at Dallas in another Sunday night game three weeks ago.

While Dak Prescott and Co. began the season with huge expectations, they are certainly making things harder on themselves.

They have lost their games played against other playoff contenders — New Orleans and Green Bay before the Vikings (7-3), who are a game behind the Packers in the NFC North. There is also that unexplainable loss at the then-winless New York Jets in Week 6.

If the regular season ended now, the Cowboys would be in the playoffs only because of that win over the Eagles and be the only NFC East team still playing. Dallas' chance at making the postseason could come down to which of those teams wins the division — they meet again in the second-to-last game of the season in Philadelphia.

Aside from the Eagles, the other four wins for Dallas are against teams with two wins or less.

The Cowboys play three of their next four games on the road. They go to Detroit and New England before playoff-contending Buffalo visits on Thanksgiving Day.

While Prescott threw for 397 yards and three touchdowns, with Amari Cooper and Randall Cobb both having 100-yard receiving games, the Vikings clearly had a different defensive plan.

"Just basically could have put a sign on the start of the game that said Zeke's not going anywhere," Jones said. "And that was the story of the game."

After three 100-yard rushing games, Elliott was limited to 47 yards on 20 carries — a 2.4-yard average with a long of only 6 yards. He caught two passes for only 16 yards. The Cowboys had only 50 yards rushing.

"It's definitely frustrating, but they're a pro team too," Elliott said. "They did a good job bottling up the run."

As for any frustration about the Cowboys losing to another potential playoff team, Elliott flatly said there was none.

"Because I know what type of team we have. We have a lot of talent in this locker room. We could be a really good team," Elliott said. "We've just got to make sure that we go out and put that on the field. Yeah, I mean, there's a lot of football left. A lot of football left. A lot of time to get better. You definitely don't want to be peaking right now, so I mean, we've just got to get back to work and keep grinding."