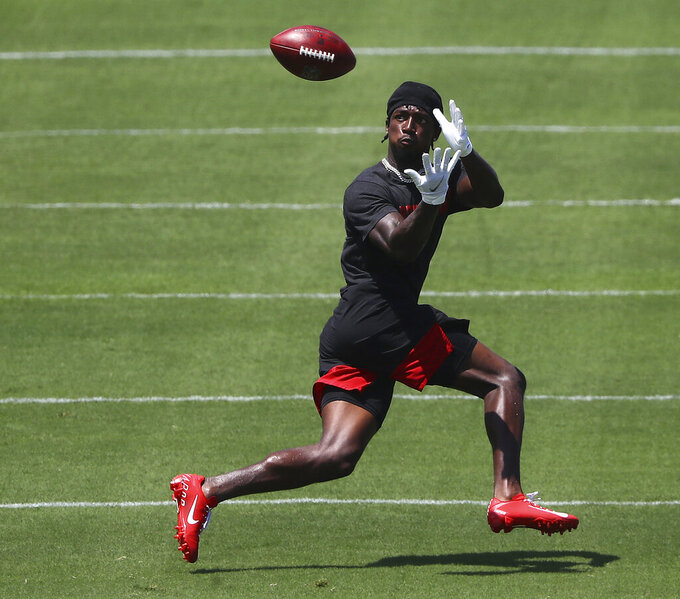 FILE - In this Aug. 4, 2020, file photo, Atlanta Falcons wide receiver Calvin Ridley catches a pass from Matt Ryan during a team strength and conditioning NFL football workout in Flowery Branch, Ga. It would be easy to overlook Calvin Ridley, being a receiver who plays on the same team as Julio Jones. Ridley, though, has other ideas. Heading into his third year with the Atlanta Falcons, he's planning on a breakout season and making sure everybody knows his name, too. (Curtis Compton/Atlanta Journal-Constitution via AP, FIle)

FLOWERY BRANCH, Ga. (AP) — When you're a receiver on the same team with Julio Jones, it's easy to get overlooked.

Calvin Ridley is hoping to change that in 2020.

Heading into his third season with the Atlanta Falcons, the former first-round pick out of Alabama — hey, that sounds familiar — seems poised for a breakout year even though it's going to be difficult to escape Jones' imposing shadow.

“I can easily be a 1,000-yard receiver, or even better,” Ridley said this week after a workout at the Falcons training camp. “I've always had confidence in myself, but now I'm really hungry."

Coming out of Alabama, where he helped the Crimson Tide win a pair of national championships and carried on the receiving legacy established by Jones, Ridley was the 26th overall pick in the 2018 draft.

He had a very promising rookie campaign (64 catches, 821 yards, 10 touchdowns) working mostly out of the third receiver spot. Last season, he took on a more prominent role in the offense after Mohamed Sanu was traded at midseason, but an abdominal injury knocked Ridley out of the final three games. He finished with 63 receptions for 866 yards and seven TDs.

Fully recovered, Ridley has big plans for this season.

Longtime Falcons quarterback Matt Ryan realizes that he could have one of the league's best 1-2 receiving punches if Ridley continues to put in the work.

On the first day of camp, Ryan even took time to demonstrate a wiggly move he wanted Ridley to try on a route over the middle.

“He’s doing exactly what he needs to do to reach the next step," Ryan said. “He's working extremely hard. His attention to detail — to me, I think, is at another level than it’s been earlier in his career. That comes with experience. That comes with being comfortable. He understands his role and what we’re expecting him to do, and now it’s about really becoming detailed in what he’s doing.”

While going against Ridley in practice over the last two years, safety Ricardo Allen has seen all the makings of an elite receiver.

“Calvin is a No. 1. He just happens to play on one side of one of the greatest receivers ever to play the game,” Allen said. “He could go to plenty of teams in this league and be the number one target, the number one guy.”

Ridley doesn't have his teammate's imposing physical stature — Jones is a couple of inches taller and outweighs him by a good 30 pounds — but he still manages to create all sorts of headaches for opposing defensive backs.

Especially when Ridley is left one-on-one because much of the coverage is centered on Jones.

With offseason training largely restricted to individual workouts or small groups because of the coronavirus pandemic, Ridley went the extra mile to continue his development, Most notably, he purchased his own Jugs machine to keep catching passes, even during a time when players were barred from team training facilities.

“With no (organized team activities), I was missing a ton of Jugs time," Ridley said. “Usually during OTAs, I'm getting crazy amounts of Jugs in. So I decided to get one just so could use it anytime at home. I wanted to keep my hands really good. I should be elite this year.”

He doesn't have to look far if he wants to know what it takes to reach that level.

All he has to do is keep an eye on Jones.

“I've just to follow in his steps if I want to be as good as him,” Ridley said. “If I'm watching him and doing what he's doing, it's easy. I know I can do it.”