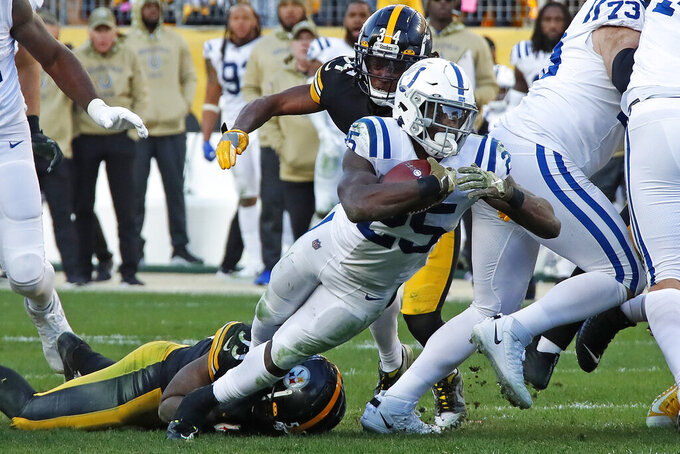 Indianapolis Colts running back Marlon Mack (25) is tackled by Pittsburgh Steelers linebacker Devin Bush (55) during the second half of an NFL football game in Pittsburgh, Sunday, Nov. 3, 2019. The Steelers won 26-24. (AP Photo/Don Wright)

Week 10 is all about putting up or shutting up. With the fantasy football playoffs looming for most seasonal leagues, this week will determine if a title run is possible or provide an early autopsy on what went wrong.

Quarterback changes in Cincinnati and Jacksonville will greatly impact things across the board, and now that Kyle Allen no longer has to worry about a possible Cam Newton return, the Panthers will have to build an offense that must avoid overworking Christian McCaffrey.

START: Lamar Jackson, QB, Ravens: While he may not duplicate his 152-yard rushing effort against the Bengals in Week 5, Jackson will record his sixth straight game of at least 60 rushing yards and seven of his past eight. His recent lack of passing yards is buttressed by the fact he's facing the worst run defense in the league.

SIT: Matthew Stafford, QB, Lions: The Bears are one of only two teams (Patriots) allowing fewer than 10 yards per completion and are tied for sixth with only eight touchdown passes allowed. Stafford's run of three straight games of at least three touchdowns passes faces a stiff challenge on the road at Soldier Field.

START: Marlon Mack, RB, Colts: This shapes up to be a huge Week 10 for Mack, who is averaging 84.8 yards per game. The Dolphins are 29th in fantasy points per game allowed to opposing running backs, along with allowing a better than 80% completion rate to them. In point-per-reception formats, Mack should be considered a solid RB1.

SIT: LeSean McCoy, RB, Chiefs: The end for McCoy may have come last week when Damien Williams rushed for 125 yards and a score against the Titans. It was the second straight week Williams had more snaps than the former fantasy bulwark, making it unlikely that McCoy will top the three carries he had in Week 9.

START: Christian Kirk, WR, Cardinals: Disappointing numbers were expected against the 49ers last week, so forget it and give Kirk a second chance against a Buccaneers defense that is dead last in fantasy points allowed to opposing wide receivers. Tampa Bay is also 29th in air yards allowed, meaning Kirk should be able to run under a deep out or two from the willing arm of Kyler Murray.

SIT: Anthony Miller, WR, Bears: Miller had an encouraging total of 16 targets in Weeks 5 & 6, but whatever optimism about his potential has been dimmed with only a combined four targets in the past two weeks, including a mere target last week against a very vulnerable Eagles secondary. The Lions are 20th in fantasy defense against opposing receivers, but it's not enough to risk wasting a roster spot.

START: Hunter Henry, TE, Chargers: Over the past four games, Henry has recorded 33 targets, catching 25 for 328 yards and two touchdowns. Oakland owns the third-worst fantasy defense against opposing tight ends, which should translate into a very productive outing for Henry on Thursday night.

SIT: Greg Olson, TE, Panthers: After putting up a combined 185 receiving yards in Weeks 2 & 3, Olson has a combined total of 110 yards in his last five outings. With Newton officially done for the season, Olson will continue to be an afterthought.

START: Zach Pascal, WR, Colts: Regardless of either Jacoby Brissett or Brian Hoyer getting the start at quarterback, Pascal will be the featured receiver against a Dolphins defense that has yielded 19 touchdown passes, third highest in the league. All signs point toward Pascal recording his first game this season of at least 10 targets.

SIT: Baker Mayfield, QB, Browns: Week 9 marked the first time this season Mayfield did not throw an interception. Don't count on the streak building momentum, as the Bills are second only to the 49ers in fewest air yards allowed. Buffalo is second in the league with only five touchdown passes allowed, giving another reason to make Mayfield a hard pass.

START: Jameis Winston, QB, Buccaneers: Yes, the risk for turnovers is strong, but Winston is all but guaranteed to throw north of 35 times. Winston has eclipsed the 300-yard mark in five of his last six games and should continue that run at the expense of a Cardinals defense that is the most fantasy-friendly D against opposing quarterbacks.

SIT: Kalen Ballage, RB, Dolphins: The suspension of Mark Walton leaves Ballage as the only viable option in Miami's ground game, and that's not a good thing. Ballage is averaging a mere two yards per carry and faces a Colts defense that has allowed just five touchdowns on the ground. Unless he's getting a host of goal line touches, Ballage has little upside.

START: Jonnu Smith, TE, Titans: Smith has pulled in 9 of 12 targets over the past two games, and his yards after catch skills makes him dangerous against a Chiefs defense that struggles in that category.

SIT: David Johnson, RB, Cardinals: The presence of Kenyan Drake hampers the upside of the still-injured Johnson, who is expected to return to the lineup. Johnson's 3.89 yards per carry isn't going to see better days against a Buccaneers defense that is the best in fantasy football when it comes to stopping opposing running backs.

START: Mike Williams, WR, Chargers: Coming off his first 100-yard game of his brief career, Williams seeks a second straight against the Raiders, who have the second-worst fantasy production against opposing receivers. Williams could have a huge Thursday night if he can pull in 8-10 targets.

SIT: Robby Anderson, WR, Jets: He's caught just 7 of 19 targets (36.8 in his last three games, managing only 86 yards in the process. The Giants are the third-worst fantasy defense against opposing receivers, but Anderson's lack of production makes him difficult to place in most lineups.

START: Jared Goff, QB, Rams: Goff has thrown 640 yards and four touchdowns in the two games after the 49ers limited him to just 78 yards. The Steelers are an average defense, one that Goff can exploit.