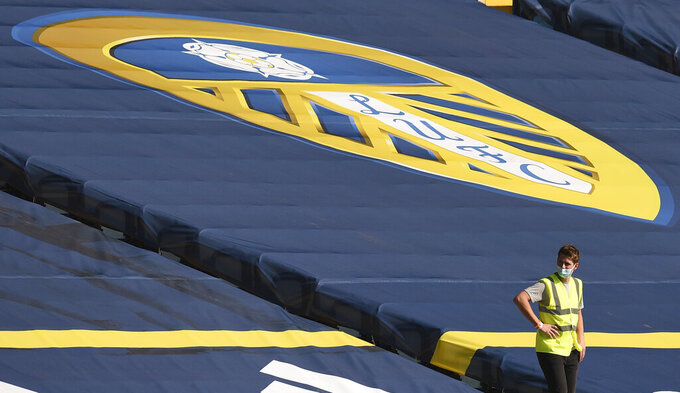 The school made the announcement Wednesday.

Arkansas State said it could not assemble a two-deep depth chart at one position group that would allow the game to be played safely.

“This is a result of a combination of positive tests on Monday and other players still displaying symptoms, as well as having time to safely reacclimate prior to the game,” Arkansas State athletic director Terry Mohajir said in a statement.

A makeup date has not been determined.

Arkansas State previously had to move its Sept. 19 home game against Central Arkansas to Oct. 10. The school did not say if that postponement was COVID-19 related, but the program said at the time that the “health and safety of our student-athletes will always come first.”

The Houston Cougars are again without a season-opening football game after North Texas had to cancel Saturday’s scheduled game because of several positive COVID-19 tests.

It is the third different expected opponent in the last two weeks unable to play the Cougars.

North Texas said there were four positive tests week, which combined with contact tracing left the Mean Green unable to field a team. The school didn’t specify any particular position group or how many additional people needed to self-isolate because of contact tracing.

Houston was scheduled to play last Friday at Memphis, but the American Athletic Conference put off that game a week in advance because of a virus outbreak among the Tigers. That game was replaced by a hastily arranged reunion with former Southwest Conference rival Baylor last Saturday, but the Bears had to cancel that game only a day before kickoff because of multiple positive tests.

The Cougars were originally supposed to open the season Sept. 3 against Rice, but that game was postponed in August. That was after a Sept. 12 game at Washington State was canceled when the Pac-12 decided not to play this fall.

North Texas (1-1) was coming of a 65-35 home loss to SMU last Saturday. The Mean Green’s next scheduled game is their Conference USA opener at home Oct. 3 against Southern Miss.

The Carolina Panthers will be allowed to have some fans — around 5,200 — for their second home game of the season.

Carolina was not allowed to have any fans in the stadium for its Sept. 13 home opener against the Las Vegas Raiders.

The change comes after North Carolina Gov. Roy Cooper announced he will allow a capacity of 7% for venues with a seating capacity of more than 10,000.

Team owner David Tepper has been pushing hard for the Panthers to have some fans in the stadium this season.

Their next home game is Oct. 4 against the Arizona Cardinals.

The European Tour has decided against having a limited number of fans for the Scottish Open next week.

The tour says because of a recent update on the Scottish government's guidelines for COVID-19, the tournament at the Renaissance Club with not have spectators. It would have been the second golf tournament to have fans, after the Sanford International two weeks ago in South Dakota on the PGA Tour Champions.

The tour is contacting those with tickets for details on a refund.

The postponed football game between No. 7 Notre Dame and Wake Forest will be moved to Dec. 12, while the Demon Deacons also are moving their nonconference game against Campbell a week earlier to Oct. 2.

The Atlantic Coast Conference announced the revisions Wednesday. That came one day after Saturday’s game between the Demon Deacons and Fighting Irish had to be postponed due to positive COVID-19 tests within the Notre Dame program, which put 13 players in isolation and 10 more in quarantine.

Wake Forest announced the home game with Campbell in late August, originally setting that matchup with the Big South Conference program for Oct. 9.

The ACC’s revamped scheduling model allows for 11 games to be played over 13 weeks through Dec. 5, as well as the possibility of playing Dec. 12. Another postponed game, Virginia-Virginia Tech, had previously been moved to that date as well.

USF said its team was tested twice last Friday, the day before a loss to the Fighting Irish in South Bend, Indiana, and again on Monday. USF says all those tests were negative, but it decided Wednesday “out of an abundance of caution” to do more tests and put practices on hold. More test were scheduled for Wednesday.

The International Judo Federation has canceled an event in Japan because of the coronavirus pandemic.

The IJF had announced a return to international competition after a months-long pause with Grand Slam events in Budapest, Hungary, next month and in Japan in December. They were intended to be part of qualification for the postponed Tokyo Olympics.

The Budapest competition now needs to be confirmed within two weeks “pending on a decision from the Hungarian government.”