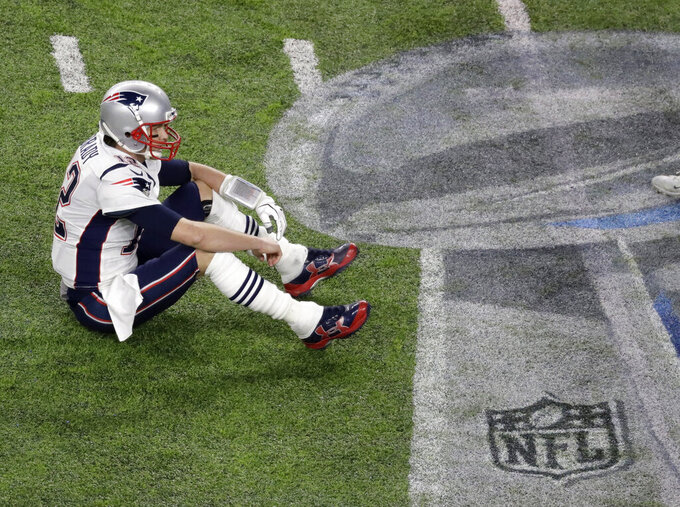 PHILADELPHIA (AP) — Losing to the Philadelphia Eagles in the Super Bowl two years ago still bugs Tom Brady, even though the New England Patriots rebounded to win their sixth title last season.

"That's a lot of mental scar tissue from that year," Brady said in his weekly radio appearance on WEEI in Boston. "That was a tough game. In a lot of ways, we learned from that year and we came back stronger the next year. We won the Super Bowl in '18. I think everything is a matter of perspective and when you play in that game and you play great teams, you're not going to win them all.

"This is not the Harlem Globetrotters vs. the Washington Generals. This is all about tough competition against the best teams. They deserved it that year, and now a couple years later we get a chance to play the organization again. We've had a lot changes, they've had a lot of changes. It's totally different circumstances. Huge game for us. Big game for them. The better team is going to win."

The Eagles (5-4) meet the Patriots (8-1) on Sunday for the first time since backup quarterback Nick Foles led Philadelphia to a 41-33 victory on Feb. 4, 2018, to capture the franchise's first championship since 1960.

Foles is in Jacksonville now, so the Patriots will get their first chance to see Carson Wentz. He was recovering from knee surgery and watched Foles' MVP performance against New England from the sideline.

"He can do it all — good arm, athletic, can extend plays, tough kid, can run if he needs to, can make all the throws, get the ball down the field, gets the ball to all his receivers, uses the backs, tight ends and receivers based on who is open, his route progression," Patriots coach Bill Belichick said. "He's good at reading defenses. They give him a lot of responsibility at the line of scrimmage to change plays or adjust plays. There's some checking going on there and so forth. So, looks like he's pretty good at everything, a pretty accomplished guy."

The Eagles have won two in a row after consecutive lopsided losses and are tied with Dallas for first place in the NFC East. The Patriots are coming off their first loss, 37-20 in Baltimore.

Both teams had a bye so they're well-rested and some of the players who've been out are getting healthier.

With rankings at or near the top of the NFL in several defensive categories, the Patriots have drawn comparisons to the 2000 Ravens’ defense.

That Baltimore unit, led by future Hall of Fame linebacker Ray Lewis, held opponents to a single-season record-low 10.3 points per game. The Ravens went on to win the Super Bowl over the Giants that season.

The Patriots have allowed only 10.9 points per game through nine games, while allowing the fewest yards per game (249.3). They're first in interceptions (19), second in passing yards allowed (150.2) and fourth in sacks (32).

Eagles coach Doug Pederson started at quarterback for the Browns the second time they faced the Ravens that season and suffered cracked ribs in a 44-7 loss. He said he sees parallels between the two defenses.

"I think the biggest thing that jumps out to you right now, the glaring thing, is the turnover ratio," Pederson said. "The fact that they've got six defensive scores this season, the interceptions, the fumbles they're causing — it's a brand of defense where they just smother you. They just corral you. They're OK with giving you 2, 3, 4 yards, but they're right on top of you."

Patriots rookie receiver N'Keal Harry is again available to make his NFL debut after being activated off injured reserve before the loss to Baltimore.

Harry, who was sidelined with a preseason ankle injury, has been practicing without restriction since being activated.

"We'll activate the players that we feel give us the best chance to compete against the Eagles," Belichick said about whether Harry will play.

The Patriots have allowed at least 135 yards rushing in four of their last six games, including 210 to the Ravens. Their vaunted defense has one flaw, susceptibility against the run. The Eagles' biggest strength is running the ball. Jordan Howard and Miles Sanders have combined for 861 yards rushing and seven touchdowns.

Throwing the ball against New England is a tough task. The defense has allowed just three touchdown passes while making 19 interceptions. Wentz has only thrown four picks this season, but the Patriots have had four in a game three times already.