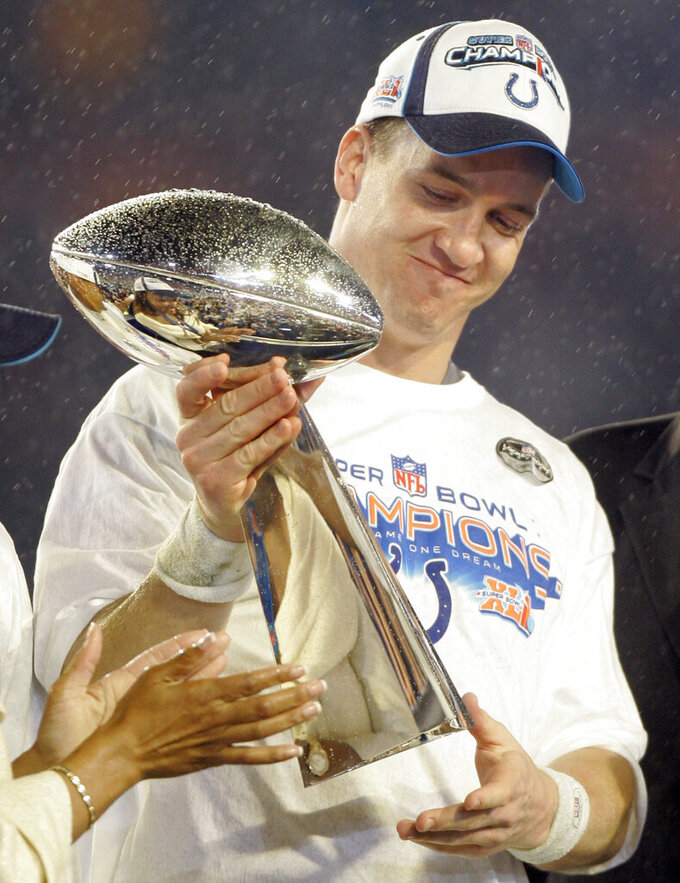 FILE - Indianapolis Colts' Peyton Manning (18) holds the Vince Lombardi Trophy after the Colts' 29-17 win over the Chicago Bears in the Super Bowl 41 NFL football game at Dolphin Stadium in Miami, in this Sunday, Feb. 4, 2007, file photo. Peyton Manning never wanted to leave Indianapolis. But when a neck injury forced him to miss a season and the Colts moved on to Andrew Luck, he couldn’t have landed in a better place than Denver, where he produced a terrific second chapter to his Hall of Fame career. (AP Photo/Amy Sancetta, File) 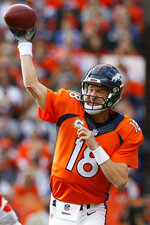 DENVER (AP) — Peyton Manning was coming off a series of neck operations in between the storied chapters of his Hall of Fame career in 2012 when former college teammate and then-Colorado Rockies slugger Todd Helton invited him to a private workout at Coors Field.

The two superstars of their respective sports who played together at Tennessee in the 1990s headed to the batting cages under the stands to throw the football around.

Helton thought Manning was goofing around when his first throw fluttered and fell short.

It was no joke.

Manning was in the midst of retraining his brain to release the ball on time and on target after missing the entire 2011 season and undergoing several cervical spine surgeries that left him with unyielding numbness in the fingertips of his right hand.

“He had nothing,” Helton recounted several years ago. “But I knew he’d come back and be Peyton Manning again because nobody else works that hard.”

That work ethic allowed Manning to overcome the heartache of his split with the Indianapolis Colts, the doubts about his football future and nerve damage in his right arm to go 50-15 in Denver and set numerous passing records while burnishing his lofty credentials as one of the greatest passers in NFL history.

Manning overcame his neck problems to throw 140 of his 539 career touchdown passes for Denver, including a record 55 in 2013. In four years, he led the Broncos to four AFC West titles, two conference championships and a Super Bowl 50 triumph after overcoming a serious foot injury to go with the Super Bowl he won with the Colts nearly a decade earlier.

Manning retired a month after becoming the first starting quarterback to win Super Bowls with two franchises, and he was elected to the Pro Football Hall of Fame 24 hours before his friend and longtime nemesis Tom Brady joined him in the exclusive club by leading Tampa Bay over Kansas City in Super Bowl 55 six months ago.

“I certainly wanted to play for the Indianapolis Colts my entire career because they were the team that drafted me” No. 1 overall in 1998, Manning said as he reflected on his upcoming induction into Canton. “I was fascinated by John Elway being only a Bronco, Dan Marino being only a Dolphin, Troy Aikman-Cowboys, my dad drafted by New Orleans, majority of his career lived in New Orleans. So, that was my plan all along.”

The Colts moved on to Andrew Luck after Manning missed the 2011 season and Indianapolis secured the No. 1 overall pick in the 2012 NFL draft.

After an emotional farewell to Indy, Manning embarked on the most anticipated free agency tour since Reggie White bolted Philadelphia for Green Bay in 1993.

“And Denver just, boy, they just welcomed me with open arms,” Manning recounted. “They were the only team that understood I think what I was going through emotionally, physically, and I think a lot of that is Elway. Elway flirted going to other teams, rumors or whatnot and I think he knew how probably that would have affected him. He certainly knew injuries.”

Manning said only the Broncos were willing to meet him halfway.

“They were the only team that said, ‘Hey, Peyton, give us your Indianapolis Colts playbook, we will form this hybrid offense with the plays that we like here in Denver that we think will help you at this point of your career, we’ll form this mesh of an offense and really give you a chance to get back going again,'" Manning revealed. “And not every other team was doing that.”

Manning said he felt like a visitor in his own locker room for his entire first season in Denver, but he soon came to embrace the city where he and his family still live.

“I have a great relationship with Indianapolis and still very involved there in the community, just like I am in Knoxville and New Orleans,” Manning said. “But you can only live in one place and Denver’s just been a great place to live and I’ve enjoyed being a part of the community and really couldn’t have made a better decision ... back in 2012.”

Almost from his pro debut in 1998, Manning was a pioneer in the way he deciphered defenses and directed play at the line of scrimmage, a mastermind pacing from tackle to tackle, pointing and hollering, as he became a model for every quarterback who has come along since.

Manning was never the best athlete, but his off-the-charts preparation and other-worldly memory recall made him rise above the rest.

“He beat you mentally,” said DeMarcus Ware, who came to Denver like so many others for the chance to play with Manning. “That was his guide: Physically you might be faster than me, you might be more athletic than me, but I’m going to outsmart you every time.”

When Manning retired, his father, Archie, said he was more impressed with the way his son had won his second Super Bowl “with his mind after winning his first one with his body.”

Manning picked his dad to introduce him in Canton.

“Never was my coach but always my mentor," said Manning, noting that his father's rule was that he'd gladly provide any advice so long as he was asked.

Manning said he was hard-pressed to trim his acceptance speech to the allotted 8 minutes because so many people played a part in his fantastic football journey.

“Unfortunately, it’s just not enough time to thank everybody," Manning said. "The good thing is for the past five years, either on a handwritten note or a phone call or in person, I’ve had a chance to thank the people personally. So, even though I won’t get to repeat them all in the speech, the thank-yous are as heartfelt now as they were then.”