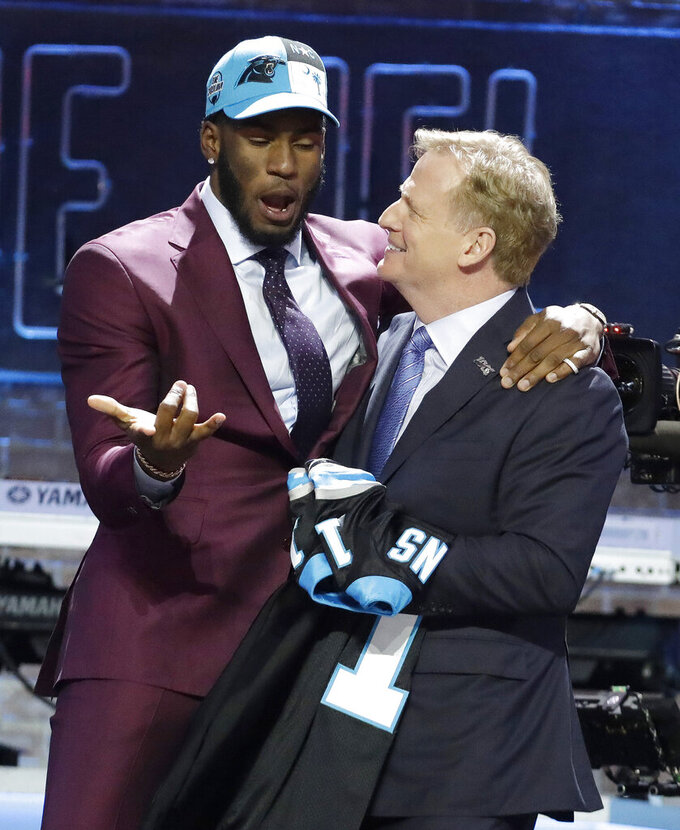 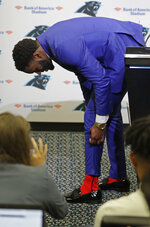 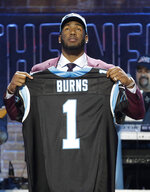 Then, with offensive tackles flying off the board, Hurney moved up 10 spots in the second round to land Mississippi offensive tackle Greg Little filling a huge need at left tackle. The Panthers cut ties with Matt Kalil earlier this offseason after a knee injury derailed his entire season a year ago. The injury prompted Carolina to sign free agent Chris Clark early last season and start him at left tackle.

Later Hurney went after quarterback Will Grier, a hometown kid, in round three to be Cam Newton's backup and potential long-term replacement. Newton's contract expires after the 2012 season. Grier, who was fourth in the Heisman Trophy voting, gives the Panthers a more reliable option in case Newton struggles in his recovery from shoulder surgery.

"What was really cool is we were able to address the three feature positions if you think about it: the rusher, the tackle and now the quarterback," Panthers coach Ron Rivera said. "We're feeling good about what happened today. It was a good day for us."

Although the Panthers had to give up one of their third round picks to move to get Little, Hurney said it had to be done.

"Being able to get up and get the left tackle and then being able to get a young, talented quarterback that you think has some promise in the future — that's a pretty good day," Hurney said. "Then you add it to a pass rusher (Burns) and, as Ron said, there are three of the five premium positions where you have added guys."

The Panthers went out and got another edge rusher in the fourth round, taking Christian Miller from Alabama. That's not necessarily a huge surprise given their lack of a pass rush last season — they were 27th in the league in sacks — but it will be interesting to see where Miller fits into the rotation. He has the versatility to drop into coverage, too.

Along the aforementioned four picks, the Panthers also selected running back Jordan Scarlett from Florida in the fifth round. Carolina traded down in the sixth round and picked up South Carolina offensive tackle Dennis Daley and wide receiver Trey Godwin from Georgia with its final two picks.

The Panthers addressed all of their concerns, almost in a methodical manner from most pressing need on the down the list.

Carolina could look to fill in a few other areas with a low-priced veteran, including possibly at linebacker and safety.