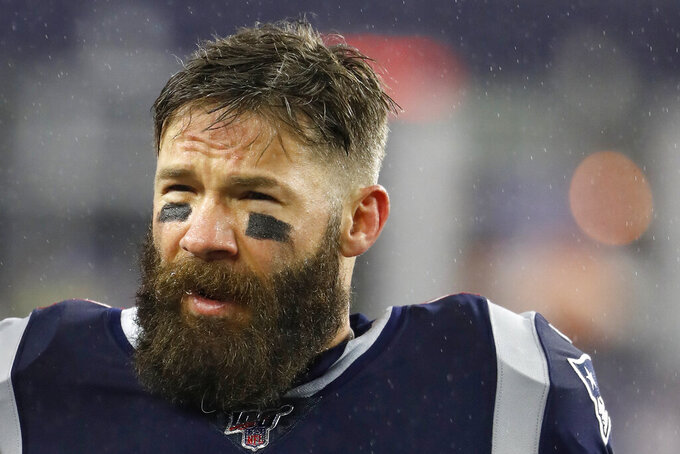 FILE - This is a Nov. 24, 2019, file photo showing New England Patriots wide receiver Julian Edelman during an NFL football game against the Dallas Cowboys at Gillette Stadium in Foxborough, Mass. Edelman said he hopes that recent anti-Semitic social media posts by Philadelphia Eagles receiver DeSean Jackson can be a teaching moment not just for him but others as well. In a video posted to Instagram Thursday, July 9, 2020, Edelman joined the Eagles, NFL and others who have condemned Jackson’s posts over the weekend.(AP Photo/Winslow Townson, File)

BOSTON (AP) — New England Patriots receiver Julian Edelman said he hopes recent anti-Semitic social media posts by Philadelphia Eagles receiver DeSean Jackson can be a teaching moment, not just for him but others as well.

In a video posted to Instagram on Thursday, Edelman joined the Eagles, NFL and others who have condemned Jackson’s posts over the weekend in which he shared a screenshot of a quote widely attributed to Adolf Hitler, saying in part: “Jews will blackmail America.”

Jackson apologized for the posts in a video on Tuesday, saying in part that they weren’t intended to demean the Jewish community and that he “never should have posted anything Hitler did, because Hitler was a bad person, and I know that.”

Edelman said Thursday that he waited to respond to Jackson’s initial post because of the complexity of the issue. The MVP of the 2019 Super Bowl noted that he has communicated in the past with Jackson over social media and said he has “nothing but respect for his game” on the field.

“I know he said some ugly things, but I do see an opportunity to have a conversation,” Edelman said in the video. “I’m proud of my Jewish heritage and for me it’s not just about religion, it’s about community and culture as well. … There’s no room for anti-Semitism in this world.”

Edelman acknowledged that he didn’t identify as Jewish until later in life, but he has since learned how destructive anti-Semitism can be.

“Whenever I encountered hatred, it never really felt like it was aimed at me,” he said. “It was only after I was part of this community that I learned how destructive hate is.”

But this isn’t the first time Edelman has spoken out about anti-Semitic incidents.

Following the shooting massacre at the Tree of Life synagogue in Pittsburgh in November 2018 that killed 11 people and injured six others, Edelman wore an Israeli baseball cap in his postgame interviews after a Patriots’ win over Green Bay to show solidarity.

Edelman later acknowledged in an interview with The Associated Press that he has heard anti-Semitic taunts during games.

“A lot of guys have got to deal with a lot of stuff when it comes to name calling,” he said. “You get so wrapped up in football and your assignment that you brush stuff off and don’t let it get to you. ... You take the high road, and you go from there.”

Edelman closed his more than 2-minute video by saying that while he was talking about anti-Semitism on Thursday, he didn’t want to distract from the country’s conversation on race and the importance of the Black Lives Matter movement, which he said was challenging everyone to have “uncomfortable conversations."

“It’s really hard to see the challenges a community can face when you’re not part of it,” he said. “So what we need to do is we need to listen, we need to learn and we need to act if we’re gonna have real change.”

To that end, he offered to accompany Jackson to the United States Holocaust Memorial Museum in Washington, D.C., and promised to attend the National Museum of African-American History and Culture with Jackson in return.

“Afterwards, we grab some burgers and we have those uncomfortable conversations,” Edelman said.