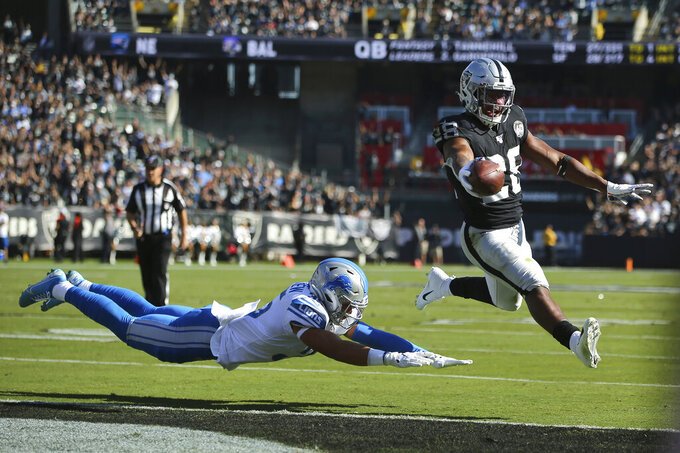 Oakland Raiders running back Josh Jacobs (28) runs for a touchdown past Detroit Lions defensive back Miles Killebrew during the first half of an NFL football game in Oakland, Calif., Sunday, Nov. 3, 2019. (AP Photo/John Hefti)

ALAMEDA, Calif. (AP) — Jon Gruden built a winner in his first stint as coach of the Oakland Raiders by bringing in grizzled veterans such as Rich Gannon, Jerry Rice and Eric Allen to fortify an already experienced roster.

Gruden is taking a far different approach this time around as the Raiders are undergoing a youth movement that has led to some surprising success early in his second season back.

An impressive rookie class led by running back Josh Jacobs has the Raiders (4-4) in the thick of the AFC West playoff race heading into Thursday night's home game against the Los Angeles Chargers.

"That is something we have been priding ourselves on since we came in," Jacobs said. "We knew we wanted to help change the culture and start a dynasty here. We all came in and made that agreement together."

That was on display in a big way Sunday when the Raiders beat the Detroit Lions 31-24 behind four touchdowns from the rookie class.

"The rookie class, not only are they good football players, they love football and they love to study and they are versatile guys," Gruden said. "They can do a lot of different things. But we're only halfway home. We're making progress, we're excited about that."

Gruden earned a reputation for preferring veterans during his first stint as an NFL coach with Oakland and Tampa Bay from 1998 to 2008. During his four seasons with the Raiders during the first stint, the only rookie to score a touchdown was Charles Woodson, who did it on an interception return.

In fact, in Gruden's final two years in Oakland in 2000-01, the Raiders got only two starts from rookies with receiver Marcus Knight and defensive lineman Chris Cooper getting one each.

This season, 10 rookies have already started games and the Raiders have gotten the second-most snaps in the league from the rookie class.

The leader of the group is Jacobs, who is one of 12 rookies to rush for at least 700 yards and run for at least six touchdowns in his first eight games.

Jacobs has been the engine of Oakland's offense, which relies heavily on the run and play-action passes. He has at least 20 carries four times after doing it just once in his entire college career and has shown the knack for getting extra yards on almost any play.

He has two games already this season when he's carried the ball at least 25 times without once getting stopped behind the line, keeping the Raiders in manageable situations. No other back has done that twice in the last seven seasons.

"This kid is really good and as he continues to develop in the passing game, he's going to be great, I think one of the best," Gruden said. "He makes a lot of hard yards, tough 3, tough 4-yard gains and he's elusive."

One of the surprises has been Moreau, a fourth-round pick out of LSU known more as a blocker than a receiver. Moreau has excelled at both so far in Oakland, catching 14 passes for 134 yards and scoring TDs in three of the past five games.

Renfrow has also been much more effective of late with 10 catches for 142 yards and two scores the past two weeks as he develops a good rapport with Carr while operating out of the slot.

The 11 TDs from the rookie class are five more than the next-best team (Washington), and tied for the second-most in the NFL through eight games since 1983, when Eric Dickerson had 12 of the Rams' 16 rookie TDs through the first eight games.

"It shows what our front office is doing and what's really being built," cornerback Daryl Worley said. "They have belief in those guys. We push them every week, we challenge them to step up to the plate. Just continue to work week-in and week-out and get better."

The contributions on defense haven't been as much with No. 4 overall pick Clelin Ferrell struggling to generate consistent pressure on the line and No. 28 overall pick safety Johnathan Abram going down with a season-ending shoulder injury in the opener.

But second-round cornerback Trayvon Mullen moved into the starting lineup in Week 8 and has shown flashes in his brief time.

Fourth-round cornerback Isaiah Johnson was activated from injured reserve this week and is set to make his debut against the Chargers.