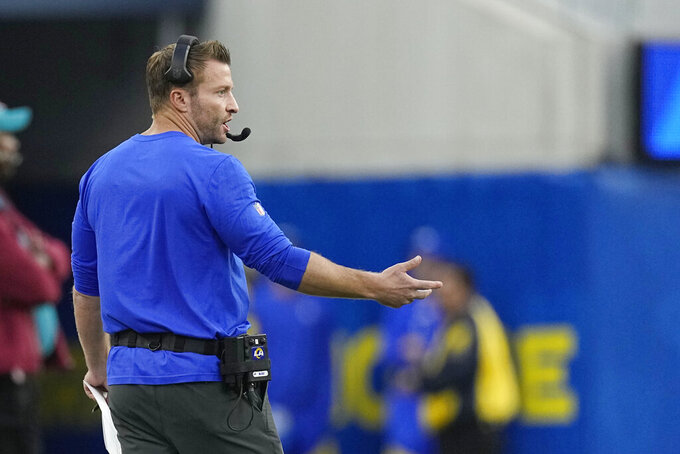 Los Angeles Rams head coach Sean McVay gestures from the sideline during the second half of an NFL football game against the Arizona Cardinals Sunday, Nov. 13, 2022, in Inglewood, Calif. (AP Photo/Mark J. Terrill)

KANSAS CITY, Mo. (AP) — Sean McVay took a frightening blow to the face from his own player in the opening minutes of Sunday's game against the Kansas City Chiefs, leaving the Los Angeles Rams coach wiggling his jaw to make sure it still worked properly.

Just when it seemed things could get no worse for him.

“It was a good shot,” McVay said of the hit he took from tight end Roger Carter’s helmet, “but I’m OK.”

The defending Super Bowl champions, missing quarterback Matthew Stafford to the concussion protocol and several top players to injuries, are anything but OK these days. They went on to lose 26-10 for their fifth straight defeat, the longest skid in McVay's career in Los Angeles, and it left the Rams with some company they'd rather soon forget.

Namely, the 1987 New York Giants, the only other team to start 3-8 and endure a five-game losing streak a year after they hoisted the Lombardi Trophy — though they did it amid a strike year using several weeks of replacement players.

The Rams already have All-Pro wide receiver Cooper Kupp on injured reserve with a high ankle sprain, and Stafford was ruled out before the game. Now, they will be without wide receiver Allen Robinson II for the rest of the season after a CT scan taken Friday revealed a stress fracture in his foot.

The Rams had high hopes for Robinson after signing him to a $46.5 million, three-year deal to help replace Odell Beckham Jr., but he wound up catching just 33 passes for 339 yards and three touchdowns in the 10 games he played.

“We tried to inject it and see if he could push through. When he got a CT scan, it revealed something that’s going to keep him from being available,” McVay said. “There’s a stress fracture on the nevicular bone in his foot. He’s going to have to get surgery on that foot. We didn’t find out until after practice on Friday. It’s another tough loss for us.”

All of that left journeyman Bryce Perkins to start at quarterback with a supporting cast also missing starting offensive linemen Ty Nsekhe and Brian Allen to injuries, and which lost wide receiver Lance McCutchen to a shoulder injury.

Not surprisingly, the Rams struggled to move the ball against Kansas City's defense.

They had just 75 yards in the first half, when the Chiefs were busy building a 13-3 advantage, and they didn't reach the end zone until the fourth quarter, by which point it was much too late to topple a perennial contender.

Even the Rams' brightest stars — at least, the ones still around — were prone to mistakes on Sunday.

Jalen Ramsey was called for a personal foul when he slapped at the face of the Chiefs' Cornell Powell after an early punt, backing the Rams offense inside their own 5-yard line. Later in the quarter, the three-time All-Pro cornerback was turned around like a top by Travis Kelce, who hauled in a pass and scooted 39 yards for the opening touchdown.

Aaron Donald, the three-time defensive player of the year, had a sack wiped out for grasping Patrick Mahomes' facemask.

All of those mistakes came after that opening shot that McVay took from Carter as he tried to take the field in the first quarter, which sent his coach's headset spinning and brought trainers over to briefly examine him.

It wound up foreshadowing another frustrating day.

“It probably looked worse when you end up playing it,” McVay said, "but I was glad I didn’t break my jaw.”