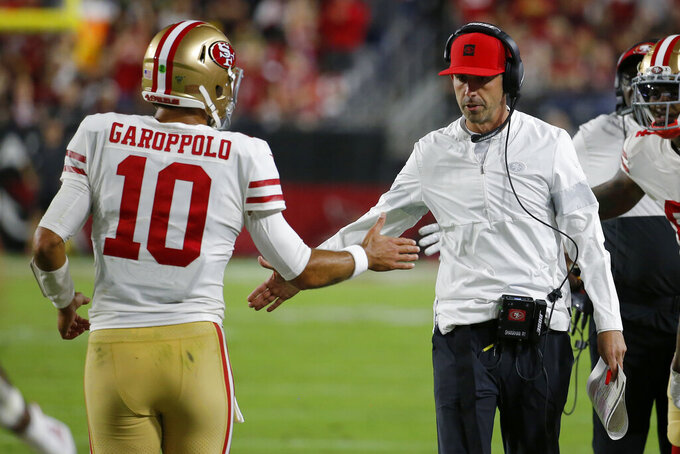 The San Francisco 49ers are the NFL's last undefeated team, while Russell Wilson is making a very strong case for MVP consideration in Seattle.

Something in the NFC West is about to give.

The 49ers (8-0) have home-field advantage Monday night and have had 10 days to prepare for Seattle (7-2) in the first of two divisional showdowns between the teams this season. The Seahawks get to wrap up the season hosting San Francisco on Dec. 29. They've already lost twice at home, making a road win now even more crucial in the NFC West.

The Seahawks maybe, just maybe, got caught looking ahead last week when Tampa Bay forced them to overtime before Wilson finished off the win with his fifth touchdown pass.

The 49ers just moved to No. 1 in the AP Pro32 poll, with the Seahawks not all that far behind at No. 5. The Niners will counter with Jimmy Garoppolo and a very stingy defense. They're favored by six at home despite having lost nine of the last 10 in this series.

Staying undefeated in the NFL this late in the season isn't easy. Just ask the Patriots.

The Chargers not only have won four straight in this series, they have found something since coach Anthony Lynn fired offensive coordinator Ken Whisenhunt. After a big win over Green Bay, not even all the talk about London calling will knock Philip Rivers and Melvin Gordon off target.

NFL MVP Patrick Mahomes is expected back. Tennessee has a habit of playing to the level of its competition, but that won't be enough.

Quarterback Kyler Murray and coach Kliff Kingsbury have the Cardinals far more competitive than expected in their rookie season. Bruce Arians is a much more experienced coach. Better yet, Jameis Winston looks like he's meshing with coordinator Byron Leftwich.

The black cat should be safely tucked away far from the field, and the Giants are being treated as the true home team as the favorite. It's also been longer since the Giants got a much-needed victory.

KNOCKOUT POOL: Yes! The AP prognostication crew has survived to this point of the season. And yes! It's getting much tougher with nine teams unavailable to find a good bet to stay alive another week. Baltimore would be the easy pick visiting winless Cincinnati, but the Ravens were the Week 6 pick. Indianapolis is very tempting hosting Miami, but FitzMagic is real — until it isn't.

No. 28 Atlanta (plus 13) visiting No. 2 New Orleans makes the Saints the easy choice, even with both teams coming off their byes.

No. 4 Baltimore (minus 10) at Cincinnati

The NFL's last winless team is starting rookie Ryan Finley, which is why Baltimore would have been the knockout pool pick. Instead, this consolation prize.

How long will the Packers' LA hangover last? Aaron Rodgers is back home facing Kyle Allen.

The Lions have a much shorter trip than last week to the West Coast. The Bears have bigger issues on offense.

Getting one win this season was surprising enough out of the Dolphins.

The Rams are rested thanks to their bye and looking for a third consecutive win. The Steelers have won three straight to climb back to .500, and they're at home.

Kirk Cousins and Dalvin Cook taking on Dak Prescott and Ezekiel Elliott. The Cowboys are at home.