Sharing the misery: Cardinals and Bengals still 0 for ‘19 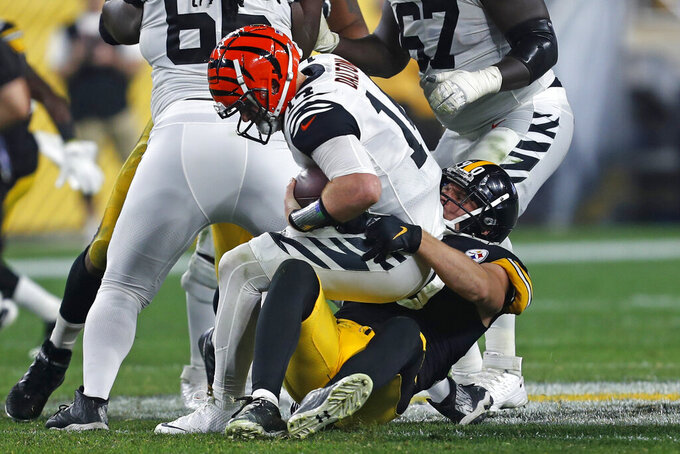 CINCINNATI (AP) — The quarterback is getting sacked a lot. Top receivers are hurt. The defense can’t stop anyone when it matters. September has come and gone without as much as one win under a first-year head coach.

They have their best chance yet to get that elusive first win Sunday at Paul Brown Stadium. Either Kliff Kingsbury or Zac Taylor can finally celebrate their inaugural victory in the NFL as a head coach.

Assuming the game doesn’t end in a tie, of course _ which would be rather fitting.

Both teams are at the point where another loss will put them in such a deep hole that all the talk about salvaging the season will become moot, and they know it.

“We’re not going to throw in the towel,” Bengals defensive lineman Sam Hubbard said. “Crazy things have happened. But if we don’t start winning games, what does it matter?”

In many ways, the winless teams have been mirror images.

Arizona and Cincinnati hired young, offensive-oriented head coaches in the offseason, but they’ve struggled to translate new systems to their new teams. Kingsbury is going through growing pains with Kyler Murray, the first Cardinals rookie to start a season at quarterback since 1954. Taylor has watched veteran Andy Dalton get sacked even before he can set to throw.

The Cardinals (20) and Bengals (19) lead the league in sacks allowed, a big reason why neither has won a game. Dalton was sacked a career-high eight times during a 27-3 loss in Pittsburgh on Monday night.

“You never want to have a game like we had Monday night, and I don’t expect us to have another one like that,” Dalton said.

The Cardinals came tantalizingly close to a win in their opening game, settling for a 27-27 tie against the Lions. They lost by six points the following week at Baltimore, again depriving them of a chance to enjoy a win.

“You want these guys to feel that based upon the effort they put in the past month,” Kingsbury said. “They really have played hard and been in games and fought to the end and all the positives you want from your team, but we just haven’t been able to close one.”

The Bengals can relate.

The Cardinals will be remembering owner Bill Bidwell, who died Wednesday at age 88 .

“I wouldn’t be here if I didn’t have his blessing,” receiver Larry Fitzgerald said. “When I got here, he was still running things. I imagine the first pick in the draft had to have his blessing.”

Dalton has been sacked so often because of an inept offensive line. Many of Murray’s sacks have been the result of trying to scramble out of trouble rather than throwing the ball away, a habit that the Cardinals are trying to change and the Bengals are trying to use to their advantage.

“He tries to extend plays and sometimes he doesn’t know where to go with the ball and he takes a sack,” Hubbard said. “He’s running around a lot.”

The Cardinals will be missing receiver Christian Kirk, who suffered an ankle injury in the closing minutes of a loss to the Seahawks. Kirk was leading the team with 24 catches. The Bengals lost receiver John Ross III , who suffered a severe shoulder injury in Pittsburgh and went on injured reserve. A.J. Green will miss his fifth game with an ankle injury suffered during training camp.