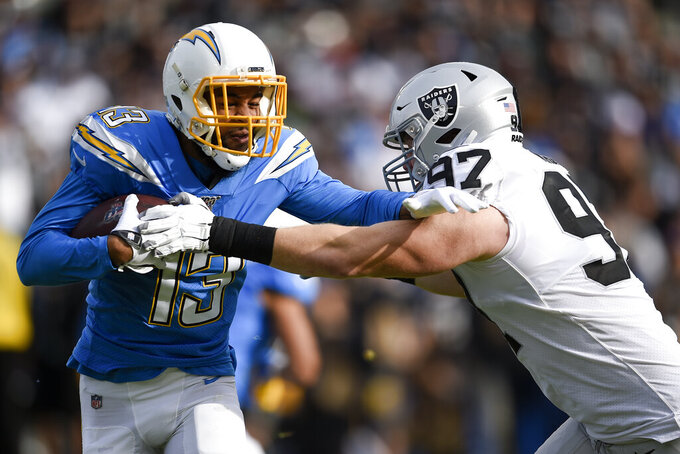 COSTA MESA, Calif. (AP) — Playing complementary football has eluded the Los Angeles Chargers for most of the season.

Their 24-17 loss to the Oakland Raiders on Sunday followed a familiar theme: The offense gets off to a slow start and by the time it gets into a rhythm, the defense can’t make a stop.

It all added up to the Chargers fourth loss in five games and assured them a last-place finish in the AFC West after making the playoffs last season.

Anthony Lynn hoped that changing coordinators at mid-season would revive the offense. It only turned out to be a temporary fix. The Chargers have gone three-and-out on two of their first three drives four times, but Sunday marked the first time in Philip Rivers’ 14 years as the starting quarterback that it happened on the first three.

The defense has allowed a score on their opening possession in seven games (four touchdowns, three field goals) while the offense has done it five times, but has only one touchdown once has it been a TD.

They are tied for eighth in first-quarter points allowed (84) and have been outscored by 31, the seventh-worst differential in the league.

With one more game remaining in a disappointing season, Lynn is trying to keep the focus on the present instead of the many questions the franchise will face during the offseason, which includes Rivers' future.

Melvin Ingram and Joey Bosa continue to have big games when facing Derek Carr. They had a role in all three sacks.

Ingram had 1½ sacks, marking his second multi-sack game against Oakland this season. He has sacked Carr eight times in his career with 3½ coming this year. Bosa, who was selected to the Pro Bowl last week, sacked Carr during the second quarter. Six of his 40 career sacks have been of Carr.

Four of Los Angeles’ 16 carries lost yardage as it was held to 19 yards. Melvin Gordon had a pair of 1-yard touchdowns, but those were his only highlights as he gained only 15 yards.

Tight end Hunter Henry has established career highs in receptions (50) and yards (510) despite missing four games earlier this season due to a tibia plateau fracture to his left knee.

Henry missed all of the regular season last year due to a torn anterior cruciate ligament, but has come back to emerge as one of Rivers' more dependable targets. He had five receptions for 45 yards against the Raiders, which was his fifth game this season with five or more catches.

Rayshawn Jenkins continues to have an inconsistent season. The safety often appears lost in coverage and took a poor angle in trying to tackle Hunter Renfrow on his 56-yard touchdown on the Raiders' opening drive.

Left tackle Russell Okung (groin) was inactive Sunday and is questionable at best for this week’s finale against Kansas City.

50 — Yards receiving needed by Austin Ekeler to become the second running back in franchise history to reach 1,000 in a season. Ekeler leads NFL running backs in receiving yards (950) and is second in receptions.

The Chargers have not gone winless in division games since 1984, but there is a very good chance of that happening with Sunday’s finale at Kansas City. Los Angeles has looked like a team more than eager for the season to end during the past two games.