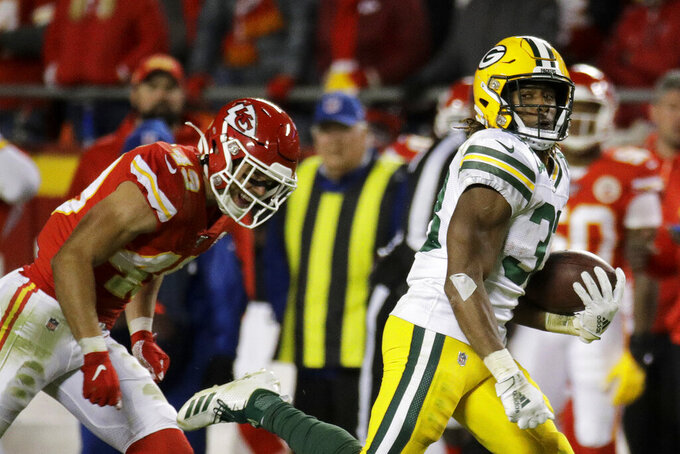 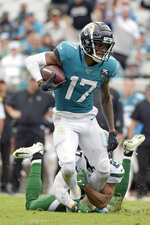 ALAMEDA, Calif. (AP) — Darren Waller was toiling away on the practice squad in Baltimore last November when the Oakland Raiders were intrigued enough by the athleticism they saw during pregame warmups to sign him away from the Ravens.

Now a player who was bagging groceries two years ago while serving a second suspension for violating the NFL's substance abuse policy is becoming a legitimate star for the Raiders.

Waller has 48 catches for 548 yards and three touchdowns through eight games this season, ranking third among all tight ends in yards and catches after coming into the season with 18 receptions in 22 career games.

"Can't be more excited for a guy. He's really the reason why you coach," Raiders offensive coordinator Greg Olson said. "I think every coach on our staff would say the same. It's just been a pleasure in the meetings, his work ethic, his preparation, certainly his athletic ability and how he's grown as a tight end coming out of college as a wide receiver, that's not an easy transition. Every facet and every aspect of his game is a great example of what a pro is and what a pro should be."

Waller is just one of several players who have emerged as stars during the first half of the 2019 season:

The third-round pick in 2017 played in the shadow of star Mike Evans his first two seasons with the Buccaneers when he totaled 93 catches for 1,367 yards. But Godwin has emerged as a star of his own this year. He has 54 catches for 766 yards and six touchdowns, nearly surpassing his season total in 2018.

Receiver was one of the biggest question marks for the Jaguars heading into the season but Chark has developed into a dangerous threat on the outside. After catching only 14 passes in 11 games as a rookie in 2018, Chark didn't take long to establish himself as a potential star early this season with TD catches in his first three games. He hasn't slowed down much from there, with a 164-yard, two-TD performance in Week 5 against Carolina. He has 43 catches for 692 yards and six TDs through nine games this season.

The 2015 first-round pick by the 49ers failed to make a big impact in his first four seasons as a player who was solid against the run but offered little as a pass rusher. San Francisco still picked up his fifth-year option and that move is paying off in a big way as Armstead is a key part of perhaps the league's most dominant defensive line. Playing outside in base defense and as an inside pass rusher in the nickel package, Armstead has stepped up his game under new position coach Kris Kocurek, who has preached a more aggressive style. Armstead has 5 1/2 sacks, nearly doubling his career high of three set last season.

"Arik has completely bought into that and he has bought into a style that Coach Kocurek and really everybody in this organization believes he can be and it's showing up play to play," defensive coordinator Robert Saleh said. "He's playing exactly the way he's being asked to play and he's showing his dominance and I only think he's going to get better."

Van Noy was a second-round pick by Detroit in 2014 and was basically handed to New England in a trade during the 2016 season in an exchange of sixth- and seventh-round picks. Van Noy found a home with the Patriots with his versatility but has become an impact player this year with 4 1/2 sacks, three forced fumbles and two fumble recoveries.

Collins, a second-round pick by New England in 2013, is making the most of his second chance with the Patriots. Sent to Cleveland during the 2016 season, Collins got a big contract from the Browns the next offseason that he failed to live up to. He was then cut by Cleveland in March and took until May to get a new contract with the Patriots. He is a major part of one of the league's stingiest defense with career highs in sacks (six) and interceptions (three), along with two forced fumbles and one fumble recovery.

A fifth-round pick in 2017, Jones had success in a limited role during his first two seasons but is enjoying a breakout campaign in 2019. He ranks eighth in the NFL in yards from scrimmage with 850 and trails only Christian McCaffrey with 11 TDs. Jones has had success as a runner, a receiver out of the backfield and when lining up out wide, adding another dimension to Green Bay's offense that was needed when star receiver Davante Adams was sidelined with a turf toe injury.