Watson after Texans’ 41-7 loss: ‘Flush it and move forward’ 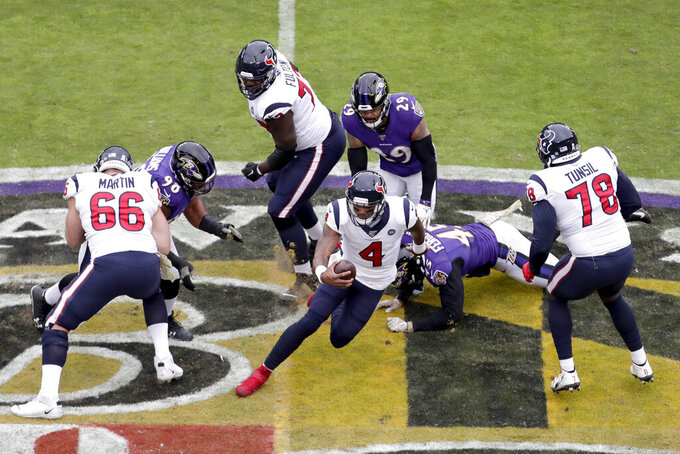 Houston Texans quarterback Deshaun Watson (4) scrambles against the Baltimore Ravens during the first half of an NFL football game, Sunday, Nov. 17, 2019, in Baltimore. (AP Photo/Julio Cortez)

BALTIMORE (AP) — When he met Baltimore’s Lamar Jackson on the field following a 41-7 defeat that was still too fresh to process, Houston’s Deshaun Jackson swapped uniform tops with his fellow quarterback.

Watson scrawled a signature on his No. 4 jersey for Jackson, then embellished his autograph with a message that could serve as a warning for a league that is still trying to figure out how to defend the Ravens’ dual threat.

A game billed as a head-to-head battle of two multi-dimensional quarterbacks never materialized. Instead, Jackson outplayed Watson from the outset, the veteran never able to catch up to the youngster.

Houston gave up seven sacks to a Baltimore defense that had collared opposing quarterbacks only 16 times over its first nine games. Watson was harried and hurried, unable to mount a comeback against a Baltimore onslaught that just kept picking up steam.

Not only was Watson limited to 169 yards passing, but he lost a fumble, threw an interception and gained only 12 yards on three carries.

“They just played hard,” Watson said of the Ravens. “They had a scheme up front. That was pretty much it.”

He took the loss in stride, saying the Texans would “flush it and move forward” and immediately start focusing on a short week of preparation for Thursday night’s home game against the Colts.

“For me, a loss is a loss,” Watson said when asked if a rout was harder to digest than a narrow defeat. “We could have went back and forth, it could have been 41-42 and a loss and still be disappointing.”

Coming in, the Texans (6-4) had won four of five. Watson was playing like an MVP.

And then, well, Houston and its standout quarterback had one of those days you’d like to forget (or “flush”).

“I’ve had a lot of success and I’ve had a lot of failures. Every great quarterback has — Peyton Manning, Tom Brady, Aaron Rodgers,” Watson said. “They’re going to have their days and they will continue to. The criticism will still come. I can go out there Thursday and light it up and everyone’s back talking highly about me.”

After this game, everyone was talking about Jackson, who threw four touchdown passes and ran for 86 yards.

“He’s as good as advertised,” Texans cornerback Johnathan Joseph said. “Obviously, he made a lot of plays with his legs. He made a couple of throws. He did what he was supposed to do.”

Fortunately for the Texans, they don’t have to lament long about this dud of a performance. First place in the AFC South will be on the line when Indy comes to town.

“A quick turnaround, so you really can’t linger on (this loss) too long,” linebacker Zach Cunningham said. “It’s definitely a plus for us.”

If the Texans play well, this defeat won’t matter nearly as much. This much is certain:

“We can’t come out and do the same thing that we did today,” nose tackle D.J. Reader said.