1st-place Eagles have plenty to fix during their bye week 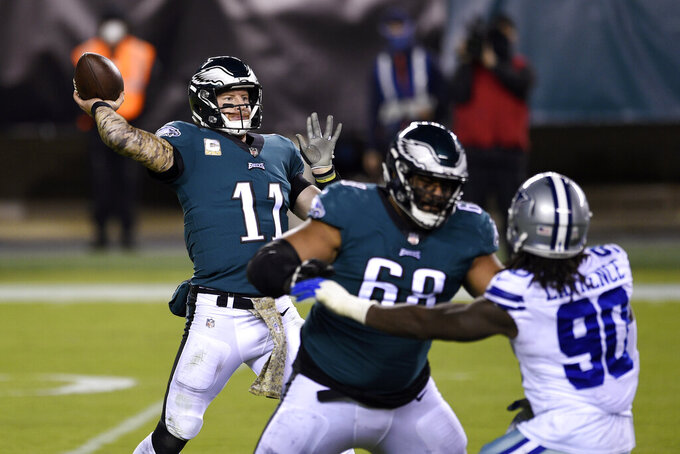 Philadelphia Eagles' Carson Wentz passes during the second half of an NFL football game against the Dallas Cowboys, Sunday, Nov. 1, 2020, in Philadelphia. (AP Photo/Derik Hamilton)

PHILADELPHIA (AP) — The Philadelphia Eagles have plenty of room for improvement despite their first-place standing.

An ugly, 23-9 win over the Cowboys sent the Eagles (3-4-1) into their bye week leading the NFC East but searching for ways to fix a mistake-prone offense and a leaky defense.

“We understand we have to get better,” coach Doug Pederson said Monday. “Are we where we want to be? Yeah, we’re first place in the NFC East, but at 3-4-1, it could easily be the other way, right? It could be 4-3-1 or 5-3 or whatever it could be. But there’s a lot of positive that we see as coaches on the inside that give us the encouragement and the opportunity to get better as a team.”

Carson Wentz had four more turnovers — two interceptions and two lost fumbles — against the Cowboys, raising his total to 16 in eight games. He has thrown 12 interceptions after throwing only seven in each of the previous three seasons.

A combination of injuries, inexperience by rookies and backups filling in as starters, questionable play-calling and his own poor decisions have contributed to the increase in Wentz’s turnovers.

The Eagles ran the ball well against the Cowboys, getting 119 yards on 26 attempts. Boston Scott ran for 70 yards on 15 carries and Corey Clement had 24 yards on five rushes. Philadelphia hopes Miles Sanders returns after the bye. Sanders has 431 yards rushing and an average of 6.1 yards per carry in five games.

Wentz needs to protect the ball better. Not all the turnovers are his fault, but the quarterback ends up getting the bulk of the blame.

Fulgham has been the highlight of the first half for Philly. After being cut four times by three teams since Detroit selected him in the sixth round of the 2019 draft, the wide receiver made his debut with the Eagles in Week 4 and has quickly established himself as a top target. He has 29 receptions for 435 yards and four TDs.

Wentz shouldn’t be benched but the fact that Pederson is even being asked about it shows how far the franchise QB’s stock has dropped.