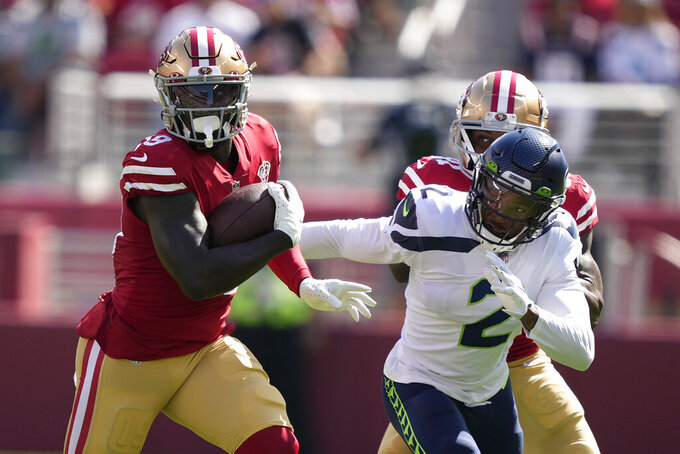 SANTA CLARA, Calif. (AP) — Deebo Samuel's days of being mostly a gadget player capitalizing on shovel passes, jet sweeps and screen passes are in the past.

Now in his third season with the San Francisco 49ers, Samuel is leading the NFL in yards receiving through four weeks since becoming a more complete receiver able to thrive downfield as well.

Samuel is coming off one of the most productive games of his career with eight catches for 156 yards and two TDs last week against Seattle.

He got open deep against a blown coverage for a 76-yard touchdown and then took a screen and fought his way into the end zone on an 8-yard score later in the game, showing off his versatility as a receiver.

Samuel is just doing much more of his work this season downfield after spending his offseason focusing on improving his route running. Samuel showed some signs of that ability as a rookie when he emerged in the second half of the 2019 season as a important part of San Francisco's offense.

But last season he was almost entirely a gadget player with his average catch coming behind the line of scrimmage.

“I’m a pretty good guy with the ball in my hands and it was a plus to go out there and run routes this offseason,” Samuel said. “Most of the things I was doing was getting in shape, boosting my stamina running routes. Not too much lifting because I’m already a big, kind of heavier guy. Just more route running and getting in shape.”

Samuel was unable to do much of that type of work in the 2020 offseason. He broke his foot in June during informal workouts with teammates and missed the first three games of the season.

He then was hampered by a pair of hamstring injuries and ended the season with just 33 catches for 391 yards in seven games in a big dropoff from his rookie season when he had 57 catches for 802 yards.

“His second year, he never got right,” coach Kyle Shanahan said. "He was never in football shape because he was hurt all offseason. As soon as he tried to get in shape, he would get reinjured. So this year, he came in like I was hoping he’d come in his second year, which wasn’t his fault. ... Made it through all camp because of how good of shape he was in. And he’s been able to handle the whole load without getting injured and keeping his stamina and power throughout games, which when he does, he’s a lot to deal with.”

He scored on the 76-yarder last week and a 79-yarder against Detroit in the opener on deep throws, becoming the first player in three years with at least two TD catches of at least 75 yards in a season.

He's also remained elite at turning short passes into big gains with his average of 9.7 yards after catch, more than 3 yards ahead of any other wideout with at least 20 targets this season.

“It’s a very cool thing to watch because Deebo’s a player that if you take the time and you’re able to show him exactly what you want, he is willing to do whatever it takes to improve upon it," offensive coordinator Mike McDaniel said. “It’s your job as a coach to best articulate that through film to show him how he can get better. I know he wants to be great. And the best thing about him is he is not satisfied. He’s been able to really expand his route tree.”