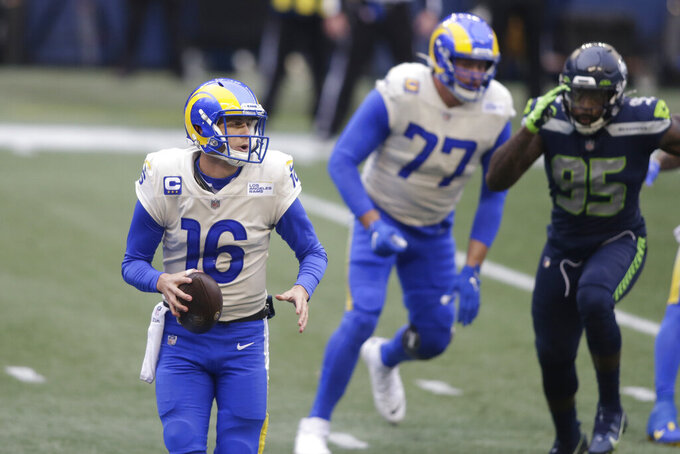 Los Angeles Rams quarterback Jared Goff (16) scrambles as he looks for room to pass against the Seattle Seahawks during the first half of an NFL wild-card playoff football game, Saturday, Jan. 9, 2021, in Seattle. (AP Photo/Scott Eklund) 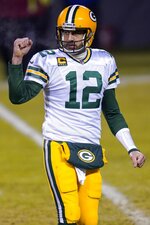 Andy Reid has been here before, with a young franchise quarterback on a team contending for the Super Bowl year after year.

The Kansas City coach is at it again with Patrick Mahomes, and thrilled to see similarly youthful leaders among the AFC playoff teams in what is the biggest QB age discrepancy between conferences in the divisional round since the merger.

How big's the gap? Well, for starters, a pair of 40-somethings will face off in the NFC with Tampa Bay's Tom Brady and Drew Brees of New Orleans. Meantime, the elder statesman of AFC playoff quarterbacks is 25-year-old Baker Mayfield.

“I think it's great for the game, this influx of new guys at the position,” said Reid, who went to four consecutive NFC championship games with Donovan McNabb in Philadelphia, starting with the 2000 season. “It's great for viewers, fans, cities. It gives these different cities an opportunity to compete.”

To Reid's point, Buffalo won a playoff game for the first time in 25 years with 24-year-old Josh Allen in charge. Cleveland ended an 18-year playoff drought behind Mayfield and humbled six-time Super Bowl champion Pittsburgh in the wild-card round.

Reid and Mahomes, also 25 but 156 days younger than Mayfield, are a win over the Browns away from their third consecutive AFC championship game after the Chiefs won their first Super Bowl in 50 years last season.

Baltimore's Lamar Jackson, the 24-year-old 2019 MVP, has his first playoff victory in hand, over Tennessee, as the Ravens prepare to visit the Bills.

“My mother-in-law sent me something the other day saying I was the old guy,” Mayfield said. “Somebody sent me just how close everybody is in age. It’s pretty crazy to see between Josh and Lamar and obviously Pat. Pat’s got the most experience out of all of us.”

Los Angeles Rams coach Sean McVay's decision on a starter will determine whether all four AFC quarterbacks are younger than the NFC quartet. If it's John Wolford, the 25-year-old is 29 days younger than Mahomes. Jared Goff is 26.

One of those two will face 37-year-old Aaron Rodgers in a visit to Green Bay, while Brees turning 42 on Friday means the meeting with the 43-year-old Brady on Sunday will make for the oldest pair of QBs in any game in NFL history (85 years).

“I just think we’ve got a very good group of guys that came into the league around the same time so it just kind of ended up that way,” Bills receiver Cole Beasley said. “Also they ended up in pretty good situations with a lot of talent around them that helped. That’s important, too.”

While the AFC quarterbacks are similar in age, the opposing offenses in each divisional game are anything but the same in style.

The Chiefs are No. 1 in passing and total offense while featuring the dynamic skills of Mahomes, the 2018 MVP before winning the Super Bowl MVP last season. Mayfield's offense leans on the running game with Nick Chubb and Kareem Hunt.

The Ravens have the league's top rushing attack, in large part because of Jackson's skills outside the pocket, and are last in the NFL in passing. Allen quietly compiled MVP-type numbers for the league's third-best passing attack in Buffalo.

The NFC matchups are more about the resumes.

With Goff included, all four have started a Super Bowl, and the other three — Brady, Brees and Rodgers — have won a title. Brady has a QB-record six championships, not to mention the all-time playoff lead in games (42), wins (31), passing yards (11,769) and touchdowns (75).

Brady and Brees are 1-2 in career yards and touchdowns passing, regular season and playoffs included. Between them, they have thrown for more than 175,000 yards and 1,250 touchdowns going into the first-ever playoff game matching quarterbacks in their 40s.

The Buccaneers leaned heavily on Brady, finishing the regular season second to the Chiefs in passing. While Brees missed four games with rib and lung injuries, the Saints counted on him much less than in the past with Alvin Kamara in the backfield and Taysom Hill sending Brees to the sideline occasionally as a run-first QB.

The Rams and Packers have the most balanced offenses among the remaining teams. Green Bay ranks ninth in passing, eighth in rushing and fifth overall. LA is 13th, 10th and 11th.

The Rams, on the other hand, won a regular-season finale to reach the playoffs and a wild-card game at Seattle with the QB spot in flux because of injuries. A dominant defense led the way.

Now, LA is the outlier in the NFC divisional round. Sure, Goff got his first two playoff victories on the way to a Super Bowl appearance two years ago. Brady, Brees and Rodgers? Try 50 playoff wins combined.

“There’s obviously me, Tom and Aaron that have played this game for a long time, been around for a while,” Brees said. “And then on the flip side you’ve got so much young talent at the quarterback position around this league, that it really makes you feel like there’s going to be a lot of exciting football in the future.”

Both will be on display this weekend.