After major trade, Saints to be key players in NFL draft 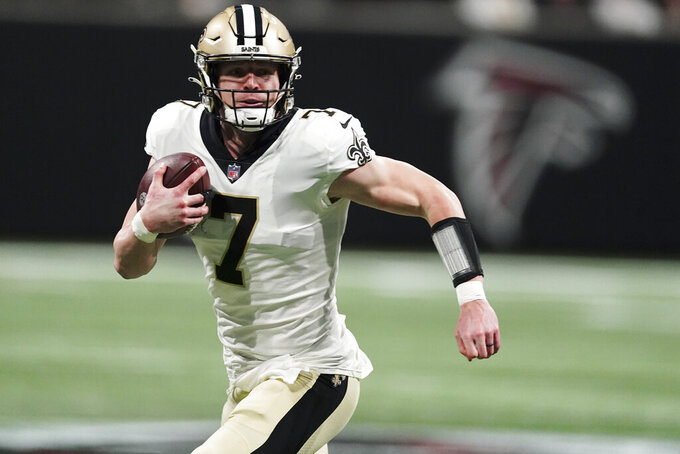 FILE - New Orleans Saints quarterback Taysom Hill (7) runs out of the pocket against the Atlanta Falcons during the first half of an NFL football game, Jan. 9, 2022, in Atlanta. Saints head coach Dennis Allen recently said Hill, who lost a preseason battle with Jameis Winston to be the successor to Drew Brees a year ago, would focus on tight end and special teams this season. (AP Photo/John Bazemore, File)

NEW ORLEANS (AP) — The New Orleans Saints have been relatively small players in free agency this offseason. They figure to be more active in next week’s draft.

The Saints have made modest signings in free agency since Allen was promoted from defensive coordinator to replace long-time head coach Sean Payton in January. But earlier this month they made a trade with Philadelphia to move up from No. 18 to No. 16 and also have the No. 19 pick in this year’s first round.

The Saints have a hole to fill at left tackle after long-time starter Terron Armstead signed with Miami as a free agent, and they have a glaring need to supplement star receiver Michael Thomas with other weapons.

Quarterback could also be a consideration for the Saints, who were one of the primary bidders in trade talks with Houston for Deshaun Watson before he chose to go to Cleveland.

Shortly after the failed overtures toward Watson, the Saints re-signed Jameis Winston to a two-year contract. Winston helped lead New Orleans to a 5-2 record last season before suffering a season-ending knee injury.

Allen recently said Taysom Hill, who lost a preseason battle with Winston to be the successor to Drew Brees a year ago, would focus on tight end and special teams this season.

The Saints, who invested a fourth-round draft pick in former Notre Dame quarterback Ian Book a year ago, recently signed veteran Andy Dalton to be Winston’s primary backup. But they might still be in the market for a long-term prospect at the position.

New Orleans could address both offensive line and wide receiver with its pair of first-round picks, though it has enough assets to make a trade to move even higher in the first round if it covets a top 10 player.

Thomas missed all of last season after undergoing late offseason surgery to repair an ankle he injured in the 2020 opener and which hampered him throughout that season.

The Saints re-signed veteran Tre’Quan Smith, but they’re still lacking a primary complement to Thomas, who had 104, 125 and an NFL-record 149 catches (in 2019) in his past three healthy seasons.

“I think we have some work to do yet so we’re looking (for a wide receiver),” general manager Mickey Loomis said.

The Saints have in-house candidates to replace Armstead in veteran backups James Hurst and Ethan Greenidge, as well as Landon Young, a sixth-round draft choice in 2021 who missed most of his rookie season because of injury.

“I feel good about our overall group of offensive linemen,” Loomis said.

New Orleans could move Pro Bowl tackle Ryan Ramczyk from the right side to fill Armstead’s spot and find a new starter on the right side, but the team says that’s not the current plan.

The Saints aren’t done with free agency, though they aren’t likely to have any significant signings before the draft.

Safety likely is still to be addressed after losing both starters when Marcus Williams signed with Baltimore and Malcolm Jenkins retired.

New Orleans has signed former Jet Marcus Maye and former Chief Daniel Sorensen. How the draft plays out will determine what holes the Saints will still have to address in free agency.

This is generally considered a deep draft and the Saints, who have a compensatory pick in the third round, have seven total picks. They haven’t made as many as seven selections since 2018. The last time they made more than seven was 2015 when they made nine.

Allen said New Orleans might be able to add candidates to make the team even after their final pick in the sixth round.

“I feel like really you’re probably looking at some guys maybe in years past that might have been late-round draft choices that might be available as college free agents,” Allen said.