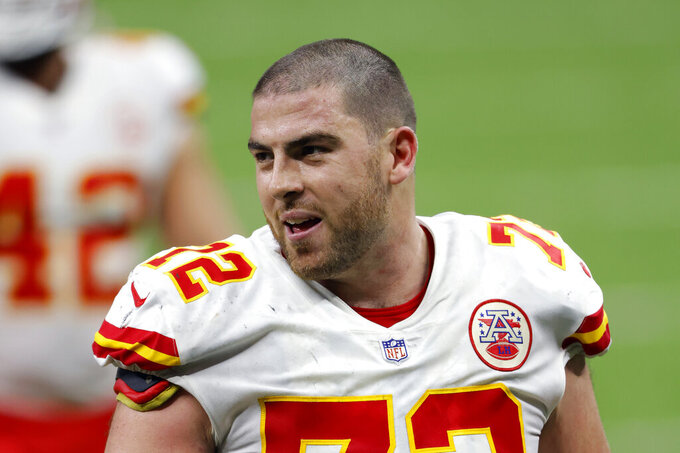 FILE - Kansas City Chiefs offensive tackle Eric Fisher is shown after an NFL football game against the New Orleans Saints in New Orleans, in this Sunday, Dec. 20, 2020, file photo. Two people with direct knowledge have confirmed to The Associated Press the Indianapolis Colts have signed Eric Fisher to play left tackle. Kansas City selected Fisher with the No. 1 overall pick in the 2013 draft but the Chiefs released their longtime starter in March. (AP Photo/Tyler Kaufman, File)

INDIANAPOLIS (AP) — When the Indianapolis Colts didn't select a left tackle in the NFL draft, they started shopping for veterans.

On Monday, they may have found a solution.

The Colts filled their most glaring need by signing free agent Eric Fisher, according to two people with direct knowledge of the negotiations. They requested anonymity because the Colts have not officially announced the move. Terms of the deal were not immediately available.

If the two-time Pro Bowler returns quickly from the torn left Achilles tendon he suffered in January, he could be the perfect blindside protector as new quarterback Carson Wentz tries to revive his career. Wentz was sacked a league-high 50 times last season despite playing only 12 games.

Indy had been looking to replace longtime starter Anthony Castonzo, who announced his retirement in January.

Most expected general manager Chris Ballard to add an offensive lineman early in free agency or the draft. While he did sign two free agents with starting experience — Sam Tevi and Julien Davenport — in March, Ballard was looking for another on draft weekend.

But after taking defensive linemen with their first two picks, the Colts missed out on some of the options who were selected in Rounds 4 and 5 before the Colts could pick.

“We’re not in a panic mode and we believe if we were playing a couple weeks from now we would have an outstanding offensive line with Tevi,” team owner Jim Irsay said during the draft. “Again, September is still a long way away. There are a lot of possibilities and things that could come up between now and then and we’ll look at all the possibilities between now and then.”

Ballard started mapping out Plan B last week. He brought in the longtime anchor of the Chiefs offensive line, someone he already knew from their five seasons together in Kansas City.

The uncertainty is whether Fisher will be ready by opening day.

Kansas City released Fisher in March even though general manager Brett Veach told reporters he expected Fisher would be back by mid-August. If he returns that soon, the 6-foot-7, 315-pound Fisher would likely be the starter.

Kansas City took Fisher with the No. 1 overall pick in the 2013 draft. He played right tackle as a rookie before the Chiefs moved him back to the left side in 2014. Fisher has started 113 of 117 games over the past eight seasons.

And his impact was never more apparent when the injury kept him out of the Super Bowl. Without Fisher, Chiefs quarterback Partick Mahomes was under constant duress and the Chiefs usually dynamic offense sputtered in a 31-9 loss to Tampa Bay.

Ballard is hoping a healthy Fisher will help Wentz stay upright, too.

“Any time you have a player like Anthony Castonzo retire, it’s a need," Ballard said last week. “We signed some guys we think are pretty good football players. How many true left tackles were in the draft? I don't have that number with me. But if you’re going to draft a guy that high and you’re drafting him to play left tackle, you want to do it knowing he’ll play that (position) his whole career."