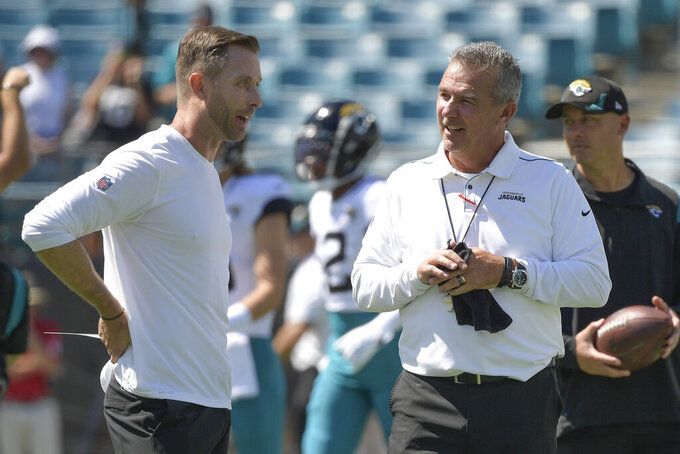 TEMPE, Ariz. (AP) — Cardinals cornerback Byron Murphy Jr. remembers during his rookie season in 2019, glancing across the field at Atlanta Falcons receiver Julio Jones, realizing he had to guard him and feeling a little surreal.

“I looked to their sideline and said ‘That’s a big dude,'" Murphy said, grinning.

Two years later, it might be opposing receivers who are a little apprehensive about facing Murphy and the Cardinals.

The Arizona Cardinals are 3-0 this season and a lot of the publicity rightfully goes to the team's prolific offense, which is led by dual-threat quarterback Kyler Murray and All-Pro receiver DeAndre Hopkins. But their much-improved defense has more than held its own, developing into an above-average group under third-year defensive coordinator Vance Joseph.

They'll get another test this week in an NFC West showdown when they face the undefeated Los Angeles Rams (3-0) and veteran quarterback Matthew Stafford, who has flourished in L.A. since his trade from Detroit.

“It's going to be a tough out,” Joseph said. “But our team's working hard, looking forward to the challenge.”

Joseph was handed a reclamation project in 2019, a mismatched mix of mostly inexperienced young players and fringe veterans that struggled. Two years later, his defense is among the best in the NFL in the season's early weeks.

The Cardinals have added some free agents to boost the group, including three-time NFL Defensive Player of the Year J.J. Watt. They've also focused on defense in the draft, selecting linebackers Isaiah Simmons and Zaven Collins with back-to-back first-round picks.

But much of the improvement has come from within: Linebackers Chandler Jones and Jordan Hicks, safeties Budda Baker and Jalen Thompson, and Murphy were there for the bad times in 2019, which helps them appreciate the recent success.

Jones had a stunning five-sack performance in the season opener against the Titans, Baker made the Pro Bowl last season and Murphy was selected as the NFC Defensive Player of the Week earlier this week after grabbing two interceptions — including one that was returned for a touchdown — against the Jaguars.

Joseph said he could see these good days coming back in 2019, even if it wasn't obvious to anyone else.

“Our first year was rough, but the last four weeks in that season, the defense became decent,” Joseph said. “It carried over to the following year and continues to get better each year. That's your goal.”

Kliff Kingsbury had never coached in the NFL prior to coming to the Cardinals in 2019, but had enough savvy to snag Joseph as his defensive coordinator. Adding a veteran presence to that side of the ball was key: Kingsbury is a former quarterback and his first priority was to develop Murray and jumpstart the offense.

That gave Joseph a lot of autonomy. The 49-year-old was the head coach of Denver Broncos for two seasons in 2017 and 2018 and wasn't fazed by the added responsibility.

“He does a great job continuing to evolve. Every time I walk in his office, he’s watching stuff, whether it’s college or NFL, trying to get better,” Kingsbury said. “So that makes it fun as a head coach, just to watch him always trying to evolve as a coordinator.”

Murphy and Hicks might be Joseph's two biggest success stories.

Murphy was the team's second-round pick in 2019 and played a ton of snaps during his rookie season out of necessity. Things weren't pretty in those first few weeks, but now there isn't much the third-year pro hasn't seen.

Hicks was a mainstay in the middle of the defense in 2019 and 2020, but his role was in question once the team drafted Collins to essentially replace him. Instead of pouting, Hicks got better and Joseph quickly came to the realization that the 29-year-old needed to be on the field.

Joseph said Thursday that Hicks could be a future coach.

That's high praise from a man who has done a pretty good job coaching himself.

“His mind works like a coach from the standpoint that he can see the big picture,” Joseph said. “Most players start by simply learning their job, but Hicks, he understands everyone's job. When you understand that part, you can help everyone. That's coaching.”