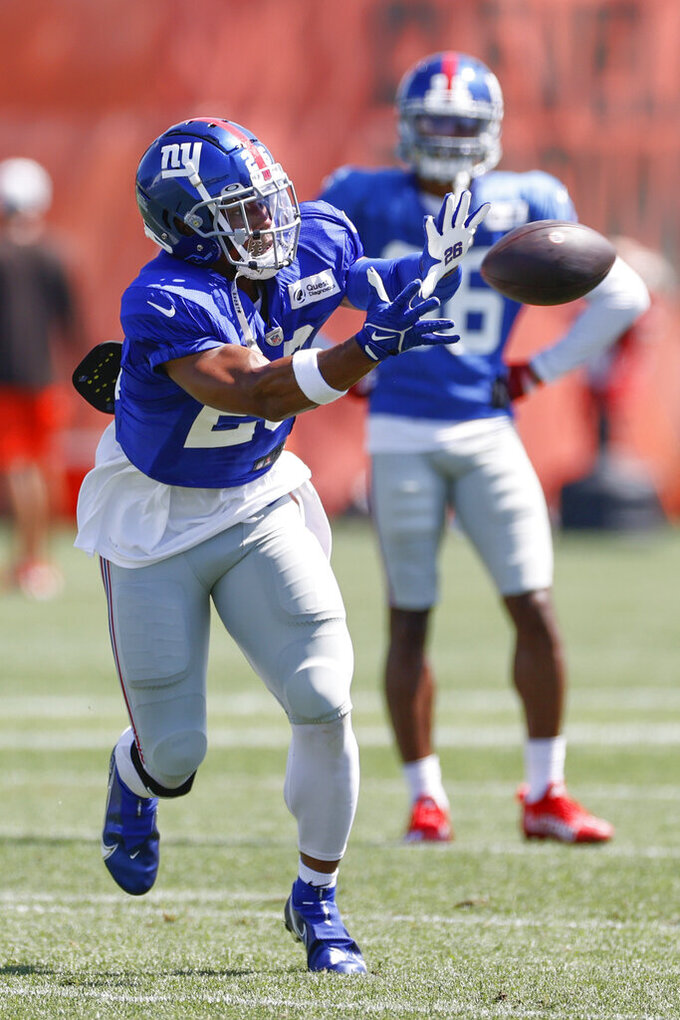 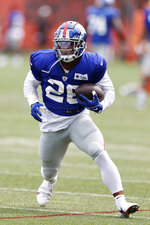 EAST RUTHERFORD, N.J. (AP) — The New York Giants are heading into their final preseason game with the status of star running back Saquon Barkley uncertain.

Coach Joe Judge had plans to meet with team doctors on Monday to discuss what the 24-year-old will be able to do during joint workouts with the New England Patriots this week.

Barkley tore his ACL in the second game of last season and had reconstructive surgery in October. He has been rehabilitating his right knee for the past nine-plus months.

The Giants have been ramping up Barkley's workload since training camp opened late last month, starting him on the physically unable to perform list. While he is off PUP, he still has not be given the green light to practice fully.

“He keeps advancing in his rehab,” Judge said. “I know he’s foot tapping every day, wanting to do more and more, and physically he keeps progressing and showing us that he can do more and more.”

Judge said Barkley would do more than he did last week when the team held joint practices with the Cleveland Browns. For the most part, the No. 2 pick overall in the 2018 draft worked in one-on-one drills with his teammates. He was not allowed to participate in either 11-on-11 drills or seven-on-seven competition between the teams or play Sunday's preseason game.

The Giants will hold joint practices with the Patriots on Wednesday and Thursday in Foxborough, Massachusetts. The teams will play their final preseason game at MetLife Stadium in New Jersey on Sunday. The season opener against the Denver Broncos at home is two weeks later on Sept. 12.

Judge has termed Sunday's game as the team's final dress rehearsal for the season. After sitting most of his starters in the first two preseason games, it's all healthy hands on deck this week.

Quarterback Daniel Jones and the offense will play at least a half, and the same is probably true for the defense.

Besides Barkley, the status of wide receiver Kenny Golladay and first-round draft pick Kadarius Toney are iffy. Golloday, the team's biggest free agent signing in the offseason, sustained a hamstring injury more than a week ago. Toney has been limited since camp opened because of the lingering effects of COVID-19 and other minor issues.

Judge said it is unlikely they will take part in the joint practices, which are intended to focus on situational football this week.

While many of the starters against New England on Sunday will be in the starting lineup for the season opener, Judge said his depth chart is not set. He said final cuts sometimes shake up a roster and a depth chart.

“The best players will always play and if someone’s outperforming somebody in practice, then they’ll play that Sunday," Judge said.

The Giants and Patriots hope to make the joint workouts an annual thing, said Judge, who worked on New England coach Bill Belichick's staff for eight years before being hired by New York as its head coach last season.

The trip to New England will not be a walk down memory lane, Judge said, noting he is not making the Giants in the image of the Patriots.