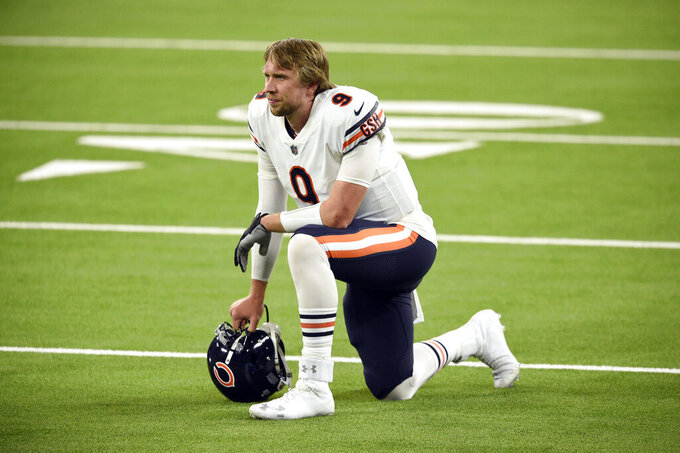 Chicago Bears quarterback Nick Foles (9) kneels on the field in the closing minutes of a loss to the Los Angeles Rams in an NFL football game Monday, Oct. 26, 2020, in Inglewood, Calif. (AP Photo/Kelvin Kuo)

INGLEWOOD, Calif. (AP) — Coach Matt Nagy usually has answers for what’s happening with the Chicago Bears’ offense, whether it is good or bad.

After a 24-10 loss to the Los Angeles Rams on Monday night in which they were held to a season low in points and the defense scored the Bears’ only touchdown, Nagy was left without an explanation for Chicago’s latest dismal performance with the ball.

“I don’t ever remember having our own defense score more than our offense,” Nagy said. “That’s that’s that’s hard to do. So that part I don’t like, and it bothers me.”

The Bears (5-2) believed they had addressed their underperforming offense by trading for quarterback Nick Foles in March, and it looked like a fix when he replaced Mitchell Trubisky to lead their rally from a 16-point deficit to beat the Atlanta Falcons in Week 3. But the offense has averaged 16 points per game in Foles’ four starts since, and he’s getting little help from the players around him.

The offensive line struggled against the strong front of the Rams (5-2), producing just 2.9 yards per carry. Foles was sacked four times, twice at the hands of former Bears linebacker Leonard Floyd, and he threw two interceptions.

Tight end Cole Kmet boxed out a Rams linebacker for an impressive 38-yard catch in the first half, and Allen Robinson got free for a 42-yard grab in the fourth quarter. But those were the only instances in which the Bears created explosive gains.

“We just have to look at everything,” Nagy said. “I don’t want to point fingers. I just don’t wanna do that to just our offensive line or just our wide receivers or tight end or the quarterback, because we’re all in this thing together. I know it’s not an answer that y’all wanna hear, but we have to keep plugging away. We have to try to fight through this really difficult position that we’re in right now.”

What adds to the pressure for the offense to find solutions quickly is a defense that continues to play at a high level. Having limited the Rams to 11.5 points per game in the teams’ meetings in the previous two seasons, the Bears were not as effective when faced with a heavy dose of quick throws, play-action and bootlegs to limit the pass rush duo of Khalil Mack and Akiem Hicks.

But they still created enough havoc to keep Chicago hanging around, with veteran defensive end Robert Quinn forcing a fumble on a fly sweep that safety Eddie Jackson returned eight yards for a touchdown.

“You just see the ball on the ground there, just take the time to scoop it up, end zone’s right there,” Jackson said.

The defense followed up the score by forcing a quick three-and-out, but Foles was picked off on the ensuing drive. He couldn’t step into his throw because of pressure off the edge, leading to an easy interception by Jalen Ramsey.

Jackson said the defense would never pin the loss on the offense. Instead, he believes everyone on the team will focus on improving. “We’re gonna get better,” he said.

Nagy agreed that accountability is the only way for the Bears to work through their struggles, starting with himself as play caller.

“It’s not clicking right now. It’s not. As any competitor, and I’m as competitive a person as there is, that’s the part where I have to challenge myself to stay patient and challenge myself to not get frustrated as well, and continue to keep coaching to the best I can and look at everything,” Nagy said. “What do we do? And how do we get to this point? I hate to feel repetitive but that’s the only thing we can do. We’re 5-2, so what I said before is, we built this little cushion and now it’s our job to be able to use it and not lose it.”