Bengals, Saints meet with both looking to get back to .500 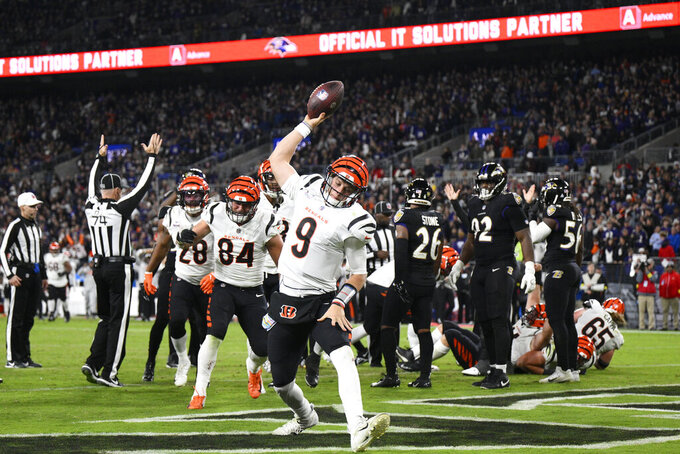 Cincinnati Bengals quarterback Joe Burrow reacts after scoring a touchdown during the second half of an NFL football game against the Baltimore Ravens, Sunday, Oct. 9, 2022, in Baltimore. (AP Photo/Nick Wass)

OPENING LINE: Bengals by 1 1/2 according to FanDuel SportsBook.

TURNOVER DIFFERENTIAL: Bengals plus-1; Saints minus-8.

SAINTS PLAYER TO WATCH: Taysom Hill is coming off one of the best games of his career, having rushed for 112 yards and three TDs to go with his 22-yard passing TD against Seattle.

KEY MATCHUP: Cincinnati QB Joe Burrow and a receiving game featuring Ja'Marr Chase against a Saints secondary that could be without top cornerback Marshon Lattimore.

SERIES NOTES: The Saints have won two of the past three, but the Bengals won the previous meeting between these teams at the Superdome.

STATS AND STUFF: Bengals P Kevin Huber has 999 NFL punts. The 14-year veteran is poised to become the sixth player in history to have 1,000 punts with a single team. ... All of Cincinnati’s three losses have been decided by walk-off field goals. ... When Bengals QB Joe Burrow completed a 59-yard TD pass to Tee Higgins in Week 4, it was his 10th scoring pass of 50-plus yards since entering the league in 2020 — two more than any other NFL QB in that span. ... The Bengals held Baltimore QB Lamar Jackson to a 59.4% completion rate last week. Jackson was 19 of 32 for 174 yards with a TD and an interception. ... In the past nine games, including the 2021 playoffs, the Bengals have held opposing quarterbacks to a 59.1% completion rate with 13 interceptions against 12 passing TDs allowed. ... Cornerback Chidobe Awuzie leads the Bengals with 23 tackles. ... Against the Ravens, Burrow was 24 of 35 for 217 yards with a touchdown and an interception that led to a Baltimore field goal in the third quarter. He was sacked twice. ... Burrow’s 18 sacks ties him for third most in the NFL this season. ... Saints QB Andy Dalton spent nine seasons with Cincinnati and ranks first in TD passes (204) for the Bengals and second in yards passing (31,594). Dalton completed 16 of 24 for 187 yards and TD vs. one interception last week. ... Saints RB Alvin Kamara had season-high 194 scrimmage yards (103 rushing, 91 receiving to go with a season-high six receptions last week, his third-career game with 190-plus scrimmage yards. ... WR Chris Olave leads all rookies in receptions with 25 and yards receiving with 389. Olave has a TD catch in his past two games and at least 50 yards receiving in each of his past four games. ... DE Cameron Jordan had 1 1/2 sacks last week and has at least a half sack in three straight. ... Jordan ranks second among active players with 110 sacks. ... LB Pete Werner had seven tackles and a second career forced fumble last week. Werner is one of three NFC linebackers with at least seven tackles in each of this season's first five weeks.

FANTASY TIP: Kamara is coming off his best game this season and could be relied upon heavily again if New Orleans' receiver group doesn't get healthier by Sunday.