Bills deficiencies exposed yet again in 14-10 loss to Pats 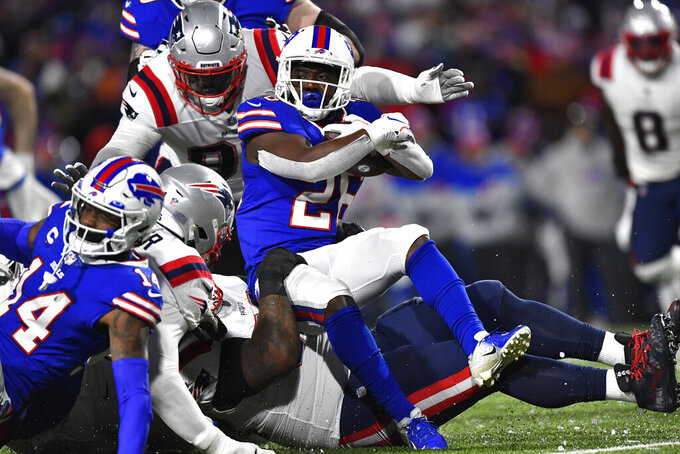 Buffalo Bills running back Devin Singletary (26) carries the ball during the first half of an NFL football game against the New England Patriots in Orchard Park, N.Y., Monday, Dec. 6, 2021. (AP Photo/Adrian Kraus)

ORCHARD PARK, N.Y. (AP) — Whether it was the gusting wind or New England’s unrelenting running attack, the Buffalo Bills' two biggest deficiencies this season were exposed yet again on Monday night.

An inability to effectively run the ball or stop the run, combined with a string of self-inflicted errors led to a 14-10 loss to the Patriots that may have cost Buffalo its best chance at repeating as AFC East champs — and perhaps put the Bills in jeopardy of missing the playoffs altogether.

“We are what our record says we are,” Bills coach Sean McDermott said. “We’ve been inconsistent, and again, had opportunities to win the game.”

It wasn’t just that the Patriots beat the Bills, but the manner in which they did it. In the face of 40 mph wind gusts, New England rookie quarterback Mac Jones attempted only three passes — completing two for 19 yards — as the Patriots ran up and down the field and right through the Bills.

Damien Harris scored on a 64-yard scamper up the middle on New England’s ninth play from scrimmage and racked up a season-best 111 yards rushing before being limited by a hamstring injury.

Something’s going to have to change for the Bills, and soon.

Buffalo is 3-4 in its past seven and hasn’t won consecutive games since capping a 4-0 run with a 38-20 win over Kansas City on Oct. 10 — the only team currently with a winning record the Bills have defeated this year.

And Buffalo’s run defense continues springing leaks after allowing 264 yards and four touchdowns in a 41-15 loss to Indianapolis two weeks ago.

Hyde and fellow safety Jordan Poyer bristled at the notion that this loss was embarrassing.

“What are you doing, bro? What kind of question is that?” Poyer said. “I think we gave up ... 14 points? 14-10, was that the final score? We made stops when we had to, they had one big run. They’ve got good backs. They kept coming back to a couple of runs. I mean, I don’t know how you want us to answer that question.”

It wasn’t just the defense that failed Buffalo against New England. The Bills' offense scored only 10 points on four trips inside the red zone. Tyler Bass missed a 33-yard field goal attempt into the wind midway through the fourth quarter, and Buffalo’s final drive ended on fourth-and-14 from the New England 18 with Myles Bryant batting down Josh Allen’s pass at the goal line.

Allen had a team-leading 33 yards rushing and finished 15 of 30 for 145 yards and a touchdown to Gabriel Davis.

The Bills have yet to overcome a second-half deficit this season, and have not done so in a win since a 35-32 victory over the Los Angeles Rams in Week 2 last season.

“I don’t know if it’s spiraling out of control,” Allen said. “I don’t know if I’d put it in that context. But we’ve got to win the close ones. We’ve got to find a way and we were 1 for 4 in the red zone tonight. Didn’t play good enough. I take that very personally.”

The troubles weren’t limited to the field, as time management became an issue.

McDermott squandered a timeout with a failed challenge with 3:09 remaining in the third quarter on a fourth-and-1 sneak by Jones. The Bills also burned a timeout on the following drive with the ball at the Patriots 6. Buffalo instead moved backward, with Allen being sacked for a 9-yard loss, followed by an incompletion and Bass’ missed field goal attempt.

“I think it’s just the familiar topic of shooting ourselves in the foot at opportune times,” center Mitch Morse said. “There’s no opportune time to shoot yourself in the foot. We just seem to tend to do it at the absolute worst time.”