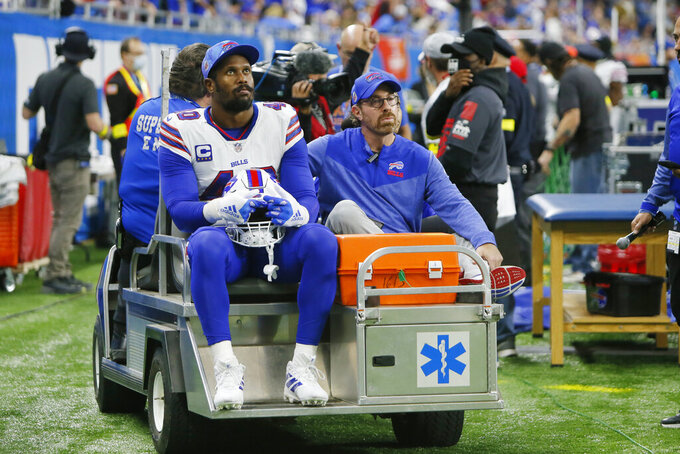 FILE - Buffalo Bills linebacker Von Miller (40) is carted off the field during the first half of an NFL football game against the Detroit Lions, Thursday, Nov. 24, 2022, in Detroit. Bills’ top pass-rusher Von Miller will miss the remainder of the season after having surgery to repair an injury to the anterior cruciate ligament in his right knee, coach Sean McDermott announced on Wednesday, Dec. 7. (AP Photo/Duane Burleson, File)

ORCHARD PARK, N.Y. (AP) — The Buffalo Bills’ hopes of having Von Miller back in time for the playoffs were dashed after exploratory surgery revealed the injury to the top pass rusher’s right knee was worse than the team and player previously anticipated.

Miller’s season is over, the Bills announced Wednesday, a day after he had surgery in Texas to repair what general manager Brandon Beane described as being “a mostly to fully torn” anterior cruciate ligament.

Upon seeking multiple medical opinions, Beane said the team and Miller decided upon having arthroscopic surgery in part to determine the full extent of the damage after initial tests revealed a tear in Miller’s lateral meniscus.

“We were hopeful that it was a scope to clean the meniscus up and any scar tissue in there,” Beane said. “But unfortunately when he went in there yesterday, (the doctor) decided that it would not be stable enough, it would not hold up.”

Rather than measuring Miller’s recovery in weeks, as Beane had hoped a week after placing the player on injured reserve, the 33-year-old is now projected to miss about nine months, leaving his status uncertain for the start of next season.

“Very unfortunate situation for Von, obviously, and our team,” coach Sean McDermott said. “We care for him, obviously, like we would any player. We know how much this means to him in terms of playing and being with the team. ... And we’re certainly thinking about him as he recovers here.”

Miller posted a video on Twitter in which he filmed from what appeared to be his hospital bed.

“I’m good, man. I’ll be right back. Mentally, I couldn’t be in a better spot,” Miller said, in addressing Bills fans. “Don’t feel sorry for me. Don’t say, ‘I hate it for you.’ None of that stuff because I am good. I’m excited for the opportunity to show my teammates how tough I am, how hard I work, and how important that this means to me, man.”

Miller then closed by saying, “All love and respect” before adding the phrase, “Don’t blink, baby,” which he and Bills receiver Stefon Diggs have repeatedly used during times of adversity this season.

Miller has missed one game since being hurt in the first half of a 28-25 win over Detroit on Thanksgiving. Miller was pushing his way through the right side of the Lions’ line when his knee bent awkwardly at the same time center Frank Ragnow stepped on Miller’s right ankle.

The news is a major setback for the AFC-leading Bills (9-3), who have won three straight and host their AFC East rival New York Jets (7-5) on Sunday.

“We’re extremely, we’re truly sad for him. We’re a better team when he’s playing, there’s no doubt about that,” said quarterback Josh Allen, who spoke to Miller after his operation. “We wish he was out there with us, and we’re praying for him. But the only way is forward. Guys are going to step up and as collective leaders come together and diminish his absence as much as possible.”

The Bills made a major splash in March by upgrading their middling pass rush by signing Miller to a six-year contract in free agency. Miller is the NFL’s active leader in sacks with 123 1/2 and he leads the Bills with eight this season.

Miller is a two-time Super Bowl champion, who signed with Buffalo a little more than a month after helping the Los Angeles Rams win the title by beating Cincinnati. Miller spent his first 10-plus years in Denver before being traded to Los Angeles last season.

Miller’s impact has been apparent both on the field in upgrading Buffalo’s pass rush, which ranks 14th in sacks per pass, and in a leadership role. Miller was voted a team captain in September.

Miller sustained a similar injury to the same knee in 2013. He also missed the entire 2020 season with an ankle injury.

The Bills' defense has already endured a rash of injuries. Starting safety Micah Hyde is on IR since Week 2 with a neck injury. Starting cornerback Tre’Davious White missed the first 10 games of the season with a left knee injury.

NOTES: LB Matt Milano did not practice Wednesday due to a knee injury. ... LT Dion Dawkins did not practice and revealed he has a high ankle sprain, which led to him not playing against New England last week.