Browns and Giants meet in prime time with playoffs on line 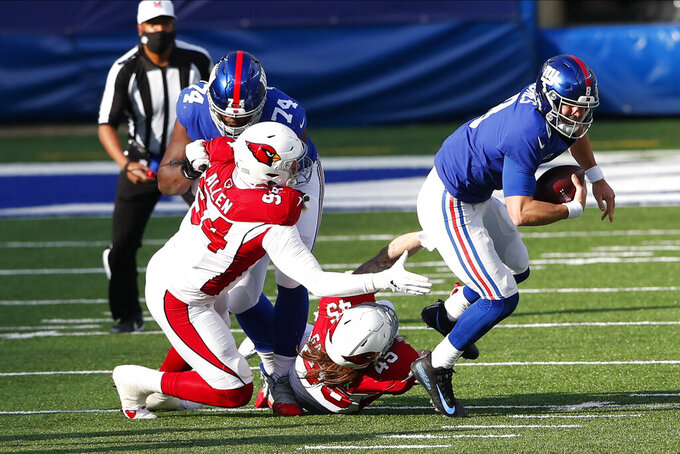 EAST RUTHERFORD, N.J. (AP) — The Cleveland Browns are coming to the Meadowlands to face the New York Giants with one thing in mind: the playoffs.

Kevin Stefanski's team isn't looking to rebound from an excruciating loss to the Baltimore Ravens on Monday night. Winning one for injured star receiver and former Giant Odell Beckham Jr. would be nice. There are more important things.

The goal Sunday night for the Browns (9-4) in their second straight prime-time appearance is to beat the Giants (5-8) and move another step closer to ending the NFL's longest playoff drought. Cleveland has not been to the postseason since 2002. The finish line is in sight with three games left in the regular season.

The Giants are even more desperate in a bid for their first playoff berth since 2016. They had their four-game winning streak snapped by Arizona last weekend and fell a game behind first-place Washington (6-7) in the NFC East.

“Every single game is the most important one,” said Browns quarterback Baker Mayfield, who is playing his best football since coming into the league in 2018. "Obviously, like I have said, we have a big-picture mindset, but the singular focus is just so vital right now to get into the postseason playoff race. We know we have to take care of business this week, and we are going to have that singular laser focus.”

The Browns, who last had a 10-win season in 2007, have scored more than 40 points in back-to-back games for the first time since 1968. On the negative side, the team has allowed 82 points in the past two games.

The Giants will go into the game without James Bradberry, their best cornerback. He had a close contact with an individual who tested positive, and was placed on the COVID-19 list on Thursday.

New York also comes into the game struggling on offense, with quarterback and coordinator questions. New York has scored 24 points in the last two games and 43 in the last three.

Starting quarterback Daniel Jones returned from a hamstring injury last week after missing a win over Seattle. He had to leave late with two injuries, the hamstring and an ankle problem.

If he cannot play, Colt McCoy will get his second start in three games.

The issue was compounded when offensive coordinator Jason Garrett tested positive for COVID-19 on Wednesday. Tight ends coach Freddie Kitchens, who was fired as Browns head coach after a tough season, will call the plays for New York against his former team.

“I think we always make an emphasis on thriving in adversity,” Giants coach Joe Judge said. “And as I said a few weeks ago, it’s adaptive, guys. So, look, something happens. We just keep moving on. We have plans in place. We have a front. We have a process that we stick to for each game. And you know, what’s important right now is that we get all the players prepared to play Sunday night.”

The unit is coming off a dreadful performance. Jones and McCoy were sacked eight times, with Jones going down six times. The offense was held to season lows of 159 total yards and seven points. New York had its streak of rushing for at least 100 yards snapped at seven.

Both were born there, and they were briefly high school teammates before Judge transferred to a rival school.

“A great person,” Stefanski said of Judge, who is just a few months older. “I have been able to follow Joe’s career. We kind of had different paths. He went the college route coaching and then makes his way up to New England and has three Super Bowl rings to show for it.”

Three teams are playing both the Giants and Jets at MetLife Stadium this season. The last one will be the Browns, who will face the Giants this weekend and the winless Jets on Dec. 27.

The Jets and Giants also played road games in the same city, facing the Seahawks and Rams.

The Giants and Browns will be forever linked by last year’s blockbuster trade that sent Beckham to Cleveland.

Beckham’s second season with the Browns ended after seven games due to a knee injury. But several other players in deals between the clubs — New York safety Jabrill Peppers, guard Kevin Zietler and defensive tackle Dexter Lawrence, along with Browns defensive end Olivier Vernon — are having big impacts in 2020. Lawrence was selected in 2019 with a first-round pick New York got from Cleveland.

Mayfield said the Browns will have Beckham on their minds.

“We are going to play for him because he is one of our guys," Mayfield said.

Mayfield played at Oklahoma, so he never has anything good to say about Texas, the Sooners’ despised rival.

However, while growing up in the Dallas area, Mayfield followed the Longhorns and became a fan of McCoy, one of the best QBs in the school’s history.

“A winner,” Mayfield said of McCoy, who was drafted by the Browns and started 21 games for Cleveland before being traded in 2013. “Everything he did for that program, obviously being right in the backyard of it we saw all of it. He led his team all the time. I followed him closely because Garrett Gilbert, who was with us, one of my friends, was Colt’s backup his freshman year. ”