Browns try to stop skid on Halloween night against Bengals 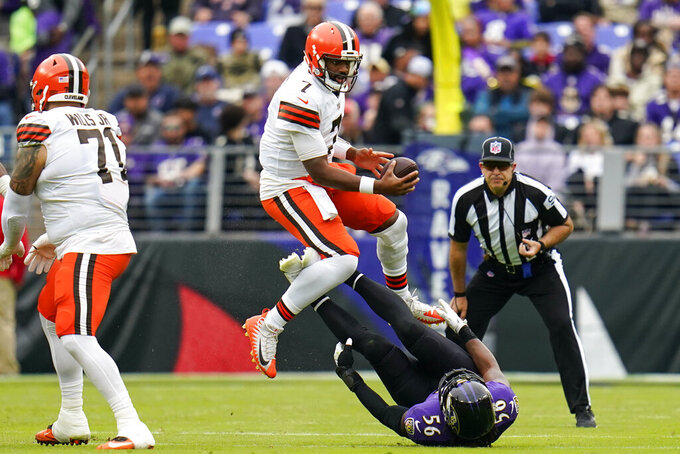 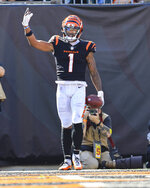 CLEVELAND (AP) — Things are pretty frightful around Cleveland these days, and it's got nothing to do with Halloween.

The Browns' season has turned ghastly.

Another loss to an AFC North opponent could damage Cleveland's playoff hopes irreparably, and raise more questions about the team's direction.

“We need a win,” said Browns quarterback Jacoby Brissett. "We have to find a way to block out all the noise and the distractions and focus in on this one.”

That always seems to be easier said than done for the Browns, who in the aftermath of a 23-20 loss in Baltimore last week had several players in the locker room yelling at each other in frustration.

Normal is rarely a term used for anything surrounding the Browns, who have beaten the Bengals four straight times — Cincinnati rested starters to get ready for the playoffs in January on its previous visit — and need to make it five straight to prevent this season from skidding further away.

“You’ve just got to find your streak,” Brissett said. “It’s a league of streaks. It’s like a 3-point shooter. Once you hit one, hopefully you see more go down and that gives you the confidence to understand that things will start falling your way.”

The Bengals are rolling in the other direction.

The defending AFC champions have won four of five following an 0-2 start and are coming off a 35-17 win over the Atlanta Falcons.

Quarterback Joe Burrow had one of the best games of his career, passing for 481 yards and three touchdowns. He scored another TD on a 1-yard run.

But while the performance bolstered Burrow's burgeoning resume, there remains one stain: He's 0-3 against the Browns.

Burrow wasn't sure this week when asked if he's ever lost three straight games to an opponent — on any level.

Burrow was hesitant to talk about the first meeting between the teams last season, when a 99-yard interception return by cornerback Denzel Ward triggered the Browns' 41-16 thumping of the Bengals.

At the time, it was a high point in 2021 for the Browns, who fell apart by dropping five of their last eight games amid controversy.

The Bengals regrouped from the blowout, won five of seven to capture the division title and made the Super Bowl.

They've done something similar on a lesser scale this season, but could be dealing with some adversity with star receiver Ja'Marr Chase expected to miss several games because of a hip injury. Chase caught two TD passes from Burrow last week.

Without Chase, the Bengals aren't nearly as dangerous, but the Browns know better than to take anything for granted or focus on anyone but the team directly in front of them.

“It's the Bengals at home. It's Monday night. It's a division opponent,” Stefanski said when asked about the game's importance. “We do put the blinders on. You can’t look ahead and you don’t look behind.”

With Tuesday's trade deadline approaching, speculation the Browns may move running back Kareem Hunt is heating up.

The team rejected Hunt's demand to be dealt during training when he wanted a contract extension. He's not been as involved in Cleveland's offense lately, fueling the idea the Browns might move him to recoup assets.

“Kareem's a good friend of mine,” Chubb said. ”He’s a great teammate. Great to play with, so who knows what happens? I love playing with Kareem.”

Browns tight end David Njoku may be a fast healer, but he may need another week to recover from a high ankle sprain sustained against Baltimore.

Njoku is tied for the team lead with 34 catches for 418 yards, and he's become a dependable playmaker for quarterback Jacoby Brissett, who was reminded how much the tight end has meant to him.

“Somebody else better mean a lot to me soon then,” Brissett joked this week.

Njoku's injury along with Pharaoh Brown's concussion has left the Browns thin at tight end.

Plus, tight end Harrison Bryant was on the injured list this week with a thumb issue.

The Browns often use two- and three-tight end sets, so Stefanski may be forced to adjust his game plan. Njoku is confident his teammates will step up.

“I’m not really too worried about them picking up the slack,” Njoku said. “I know they work hard every day. They prepare as if they are Tight End 1. So I expect them to pick up exactly where I left off.”

Chase's injury could force the Bengals to turn to a running game stuck in neutral.

While Joe Mixon has been a dependable receiver (27 catches) and embraced his pass-blocking role, Cincinnati's featured back has had limited success. Mixon gained 58 yards on 17 carries last week and has yet to top 100 in 2022. He’s averaging only 3.3 yards per carry.

The 26-year-old Mixon has been frustrated — he called a players’ only meeting with the offensive line — but said he's seeing progress.