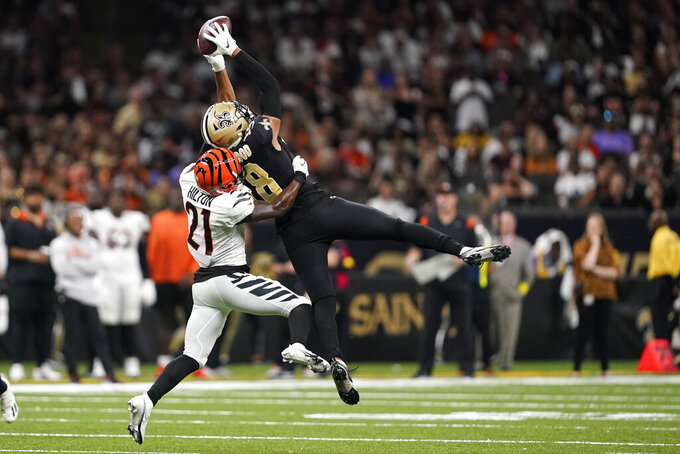 “I just wanted to pay tribute to the people of Louisiana and all the fans, playing in the stadium we won the national title game in,” Burrow explained, adding that Chase is "from here and we made a lot of great plays together at LSU.”

The gesture also foreshadowed what Burrow, who won the Heisman at LSU, and Chase, a Biletnikoff Award winner, were about to do in their return to New Orleans as pros against the Saints.

Burrow passed for three touchdowns and scrambled 19 yards for a score, with two of his scoring passes going to Chase in a 30-26 comeback victory.

The second Chase touchdown came on a quick pass to the left sideline that the receiver turned into a 60-yard, go-ahead score with 1:57 left.

Chase spun away from cornerback Bradley Roby as he made the catch before sprinting past safety Tyrann Mathieu.

“That’s just on us,” Matheiu said. “We’ve got to make that tackle.”

Chase ended the play by high-stepping into the end zone, where he punted the ball in celebration.

“I can come back after the season and talk a little trash, so that’s good,” Chase said lightheartedly. “My family members all love the Saints. It’s good for me to come back home and rub it in their face a little bit.”

The Saints (2-4) failed to get a first down on their next series, and Blake Gillikin’s shanked punt fluttered out of bounds at the Cincinnati 40.

One play later, Chase was racing away from the Saints secondary to finish his day with seven catches for 132 yards.

“We got it in great field position, so the original thought was get 20 yards and try to run the clock out" and win on a field goal, Burrow recalled. “But then Ja’Marr did what Ja’Marr does and just goes and scores a touchdown.”

It was the Bengals’ first lead, and they made it stand up by stalling New Orleans at midfield on a long, incomplete pass on fourth down. Former Saints cornerback Eli Apple was in coverage on that play, falling down in front of receiver Marquez Callaway as the ball came down near the sideline.

The Saints, and their fans, protested for a pass interference penalty, but no flag was forthcoming.

“I felt like there was a lot of contact there for Quez to try to make a play on the ball and get brought down,” said Saints QB Andy Dalton, who was making his third start for injured season-opening starter Jameis Winston.

New Orleans rushed for 228 yards as a team, but ended four drives inside the Cincinnati 20-yard line with Wil Lutz field goals.

“When you’re kicking field goals instead of scoring touchdowns, that was the difference in the game for sure," Dalton said.

Burrow's other touchdown passes went for 9 yards to Joe Mixon and 15 yards to Chase, who caught seven passes for 132 yards.

A fumble by Bengals punt returner Trent Taylor set up the game's opening score. Andrew Dowell stripped the ball free and Adam Trautman recovered for New Orleans at the Cincinnati 32.

Shortly after, Dalton connected with Tre'Quan Smith over the middle for an 18-yard score.

After Mixon's TD tied it, the Saints regained the lead when undrafted rookie receiver Rashid Shaheed, making his NFL regular-season debut, took an end-around to the right side 44 yards for a touchdown.

Burrow trimmed the Saints' lead to 17-14 in the second quarter when he ducked out of a near sack and scrambled 19 yards for a score.

“Sometimes when it looks like things are really bleak and dead, Joe finds a way out of the mess,” Bengals coach Zac Taylor said. “You don’t know how he does it. He just does it.”

VICTORY, BUT NO CIGAR

Burrow's highlights pleased a number of fans in the stands wearing Burrow's No. 9 jersey — some in Bengals black and orange and others in LSU's purple and gold.

“It was great to come back and feel the culture and energy of the fans,” Burrow said. “I might have gotten one little boo there when I first came out. That was interesting, but it finished the right way.”

Burrow memorably smoked a cigar after LSU beat Clemson in the Superdome.

“Only championships,” Burrow said, smiling wide at the memory — or maybe it was a prediction.

Bengals: Reserve defensive end and special teams contributor Jeff Gunter went down with a knee injury during warmups and was carted off the field. ... Linebacker Logan Wilson left the game with a shoulder injury.

Saints: Trautman, a starting tight end, was treated for an ankle injury in the second quarter.