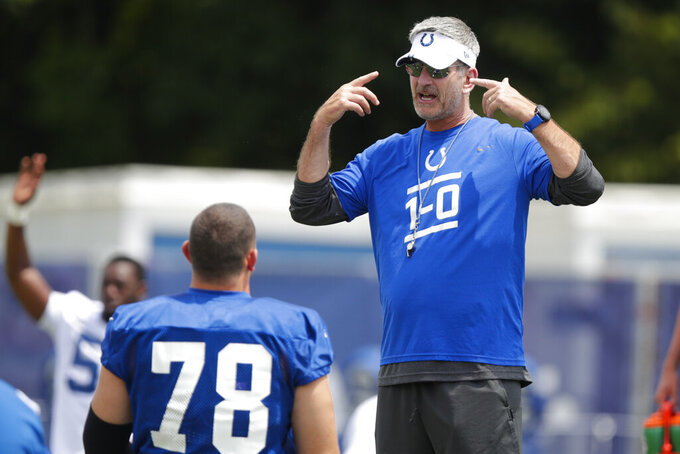 FILE - In this July 26, 2019, file photo, Indianapolis Colts head coach Frank Reich, right, talks with center Ryan Kelly (78) who warms up during practice at the NFL team's football training camp in Westfield, Ind. Reich is always considering new approaches to finish the job. So this offseason, he made a proposal to Kelly.(AP Photo/Michael Conroy, File)

So this offseason, he made a proposal to starting center Ryan Kelly.

Rather than wait until the traditional three-day mandatory mini-camp in June, Reich and general manager Chris Ballard asked Kelly whether his teammates would be interested in holding light, in-person, voluntary workouts for two weeks and then get eight full weeks off before the start of training camp.

It was almost an instant hit.

“We have a four-hour day, we test, work out a couple times a week, we do individual (drills), we run routes in the air, we do walkthroughs against the offense," Kelly said. “I think this is the best offer I saw out of everybody in the NFL and it just goes to show the Colts being proactive about health and safety. I think it just makes sense going forward."

Workouts began Monday at the team complex, and while it was unclear if anyone opted out, most opted in.

Reich said new quarterback Carson Wentz also was in town, but sat out Monday because of a non-COVID-19-related illness. Indy hopes to have Wentz on the field Tuesday. Recently signed left tackle Eric Fisher also was at the team complex, but he's still recovering from a torn left Achilles tendon suffered in January.

The traditional offseason format was tossed out last season amid the pandemic, and if players have anything to say about it, the previous workout scheduled may be scrapped for good thanks to the new the 17-game regular-season schedule.

What players found out last year, NFLPA president J.C. Tretter wrote on Monday, was that they stayed heathier without all of the offseason team activities. Tretter explained on the union's website that the union had been increasingly concerned over the past decade about the intensity of offseason workouts and the pressure to attend practices.

“Players felt better, physically and mentally, and the injury data supports those anecdotes," Tretter wrote. “Our player leaders proposed changes to their teams’ programs (this year), such as shortening the number of weeks of the offseason program and decreasing the number of practices, as well as decreasing intensity by converting practice to walkthroughs and removing 11 v. 11 periods."

But as players from some teams, such as the Denver Broncos and Seattle Seahawks, announced they wouldn't attend the voluntary workouts, Reich and Ballard were already devising a solution.

They promised the workouts would be light in exchange for an additional three-week break. In exchange, Riech and his staff will get five extra days to work on fundamentals, technique, playbook installation and discussing a vision for the franchise and individual players in 2021.

The hope is they'll get enough time with the players to see the results when they return for training camp.

“I’m confident we’ll get a lot of work done in this two weeks,” Reich said. “There’s no perfect solution. You trust each other, you say, ’OK, what’s the objective here? We need to get some time. We’ve got new coaches, a new quarterback. What’s a reasonable solution to this?"

Kelly and others quickly jumped on board after returning to the playoffs last season, their second trip in three years.

With so much change at so many key positions, players figured it made sense to come back, get to know their new teammates and to start finding the chemistry that could make them a Super Bowl contender.

Kelly believes it could be the blueprint for the future, and his teammates seem to concur.

“I definitely think this is a great compromise between the players, the front office and the coaching staff," Buckner said. “To get these two light two weeks in before June starts and have eight weeks to prepare and get our bodies right for the season, I think it’s the perfect adjustment."