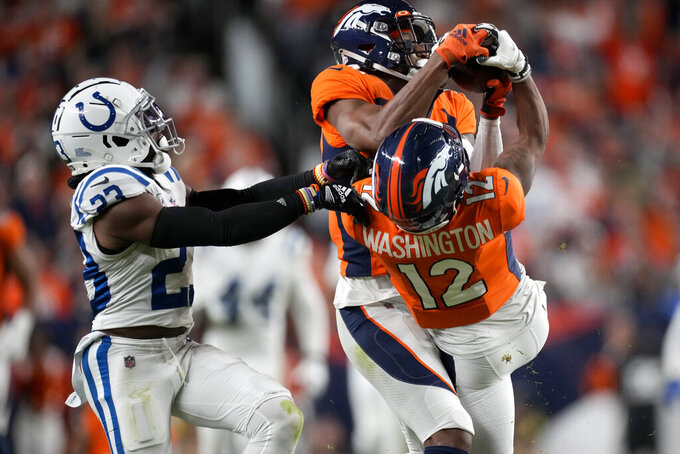 With the Jacksonville Jaguars taking Round 1 of this biannual rivalry, Indy needs to settle the score for a legitimate shot at the larger prize — its first AFC South title since 2014.

And Reich, a boxing analogy fan, fully expects his team to fight.

“It’s a big deal. It's a division game, they beat us up pretty bad last time, I think we all understand,” he said. “This is about us taking a step and proving we are making the progress we want to make.”

It's not been the kind of start Reich or anyone else around Indianapolis envisioned.

The Colts (2-2-1) have allowed a league-high 21 sacks and are averaging a league-low 13.8 points. New quarterback Matt Ryan has 11 fumbles, one short of his single-season career high, and last year's NFL rushing champion Jonathan Taylor hasn't rushed for more than 71 yards since Week 1.

Worse yet, Indy is 0-2-1 in division play as it begins the second half of its six-game rotation this weekend. Yet somehow, Indy finds itself one-half game behind division-leading Tennessee, with a rematch against the Titans looming in Week 7.

Yes, the Colts know something needs to change.

Recently, the Jaguars (2-3) have delivered the knockout blows. They've won four of six in this series, eliminating the Colts from the playoffs in last season's stunning finale and logging the NFL's first shutout this season with a a 24-0 victory in Week 2.

“Obviously, Jacksonville has had our number and did a great job executing against us in Week 2,” Pro Bowl defensive tackle DeForest Buckner said. “But we have a great opportunity to come back this week.”

Jacksonville has had the same problem on offense the past two weeks. Those losses sent the Jags falling from first to third in the division, and second-year quarterback Trevor Lawrence received much of the blame after throwing three interceptions and fumbling four times.

What first-year coach Doug Pederson really wants, though, is for Lawrence to counterpunch with a cleaner performance — like Week 2 when his team picked apart the Colts with short, quick throws, a solid ground game and a strong defense.

It could be Jacksonville's winning combination — again.

“There’s a balancing act of you don’t want to chase ghosts,” Lawrence said. “But you’ve also got to be ready for whatever could come at you because you don’t really know.”

The Jaguars have a small margin for error. With Lawrence playing in a new offense as the centerpiece of one of the youngest teams in the league, Jacksonville is not built to play from behind or overcome a lot of mistakes. So it’s no surprise the Jags are 0-3 when losing the turnover battle and 2-0 when winning it.

Their best game came against Indy when they were plus-three. They can't count on that happening again.

“There’s going to be some wrinkles,” Lawrence said. “There may not be as many as you think, but you’ve got to prepare yourself and you’ve got to do all your homework."

In his starting debut at left tackle, Raimann drew four penalties in the first half — three for holding. Reich said Wednesday the long-term plan is to keep Raimann in the lineup and that Raimann expects to play better.

“We got the win, but it wasn’t good enough on my end," the Austrian said. "Lots to learn from, lots of mistakes from last week to clean up.”

Lawrence and Pederson insist high-priced receiver Christian Kirk will be targeted more this week than last. Kirk, who signed a four-year, $72 million contract in free agency and had 18 receptions in the first three games, was targeted a season-low three times last week and finished with one catch.

“We’ve got to get him the ball,” Lawrence said. “That’s an every-week thing. He’s no secret. People have seen what he can do. It’s not going to sneak up on anybody, but for us, it’s just put him in situations to succeed and be open to get touches.”

Even while struggling this season, Ryan continues to climb the NFL's career passing charts, and he's in position to make another move this week.

If he throws for 251 yards, he will pass Hall of Famer Dan Marino for seventh on the league's list. Marino retired as the NFL's all-time passing leader with 61,361 yards.

But Ryan and the Colts have other concerns.

“You’ve got to be able to throw jabs, throw jabs and then throw a combination and find that rhythm, which is the one thing we’ve had a hard time doing,” Reich said. “We’ve talked a lot about finding our rhythm in a boxing match, sequencing plays, getting the execution we want. So, we’ll continue to fight to find that rhythm.”