Column: Meyer should know by now he's not in college anymore 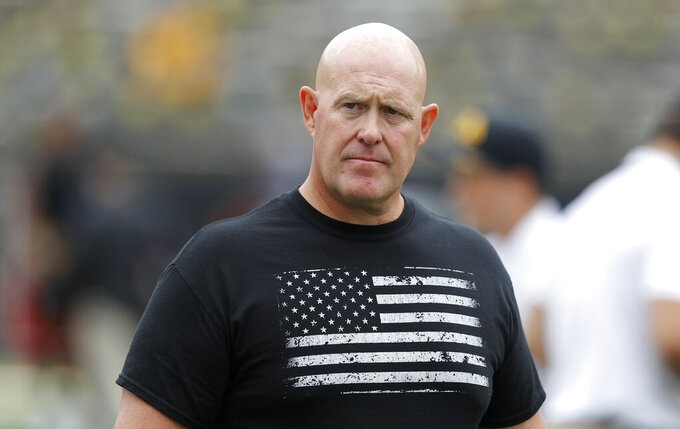 FILE - In this Sept. 1, 2018, file photo, Iowa strength and conditioning coach Chris Doyle walks on the field before an NCAA college football game between Iowa and Northern Illinois in Iowa City, Iowa. Jacksonville Jaguars coach Urban Meyer defended the hiring of former Iowa assistant Chris Doyle on Thursday, Feb. 11, 20201, by saying he “vetted him thoroughly along with our general manager and owner.” Iowa agreed to pay Doyle $1.1 million in a resignation agreement last June after scores of former players said he bullied and discriminated against them. (AP Photo/Charlie Neibergall, File)

If nothing else, Urban Meyer should know by now that he’s not in college anymore.

The fact he didn’t seem to grasp that before his ill-advised hire of controversial strength coach Chris Doyle, though, doesn’t bode well for Meyer’s chances of long-term success in the NFL.

Meyer’s own hiring last month in Jacksonville came about largely because he fit the mold that many in football still feel most comfortable with. But that didn’t mean he could get away with doubling down on an assistant coach who faced accusations he bullied players and made racist comments in his last job.

Doyle’s hiring likely wouldn’t have gotten more than a raised eyebrow at Ohio State or Florida, where Meyer reigned unchallenged as the head football coach of teams that won national titles and brought in tens of millions of dollars to their university athletic coffers.

But in a league already under fire for a lack of minority coach hires — including Meyer’s new job in Jacksonville — it meant Doyle would last no more than a day with the Jaguars.

There are, of course, plenty of other people Meyer can hire to show players the proper way to lift weights. Indeed, it’s hard to understand why he didn’t reach out to one instead of a coach who would bring baggage at a delicate time for racial relations in a league where the players are overwhelmingly Black.

Meyer’s excuse seems to be that he’s known Doyle a long time. Interestingly enough, that’s pretty much the NFL’s excuse every time a new head coach gets hired who is not Black — something the league has had a disgraceful record on over the last few years.

Simply put, Meyer should have known better. He has yet to coach a game in the NFL and should have known that hiring Doyle as one of his first moves in charge would raise questions that would be hard to answer.

The fact he went ahead anyway brings into question Meyer’s judgment and raises some questions about his chances of successfully navigating his way through a league he doesn’t yet seem to understand.

Jaguar officials share some blame, too, and not just for hiring Meyer when there was a growing clamor to hire some of the aspiring Black assistant coaches who keep getting passed over. Meyer himself made sure to say it was a group decision when he announced Doyle’s hiring on Thursday.

“I vetted him thoroughly, along with our general manager (Trent Baalke) and owner (Shahid Khan),” Meyer said.

So thoroughly, apparently, that little more than 24 hours later Doyle had resigned from his new position — and the Jaguars had a public relations problem they could have easily done without.

What changed? Well, unlike most of his time in college, somebody actually called Meyer out on something.

The Fritz Pollard Alliance generally focuses on its original mission of getting more Blacks hired as NFL head coaches. But it couldn’t ignore the hiring of an assistant who resigned from the University of Iowa last year after more than a dozen former players said he bullied and discriminated against them, allegations Doyle has denied.

“At a time when the NFL has failed to solve its problem with racial hiring practices, it is simply unacceptable to welcome Chris Doyle into the ranks of NFL coaches,” the alliance said. “Doyle’s departure from the University of Iowa reflected a tenure riddled with poor judgment and mistreatment of Black players. His conduct should be as disqualifying for the NFL as it was for University of Iowa.’’

Rod Graves, a former executive with three NFL teams who is the group’s director, went a step further, calling Meyer out for hiring Doyle without exploring other alternatives.

“Urban Meyer’s statement, `I’ve known Chris for close to 20 years,′ reflects the good ol’ boy network that is precisely the reason there is such a disparity in employment opportunities for Black coaches.”

That he knows how to coach isn’t disputable. In 17 seasons as a college head coach, he ran up an astonishing record of 187-32 and won three national titles at two different universities.

He was basically untouchable as long as he kept winning, though Meyer did serve a three-game suspension in 2018 at Ohio State for his role in handling the domestic abuse allegations against another assistant.

But the NFL is different in a lot of ways, something Meyer quickly found out. Just because he declared Doyle had been properly vetted didn’t stop the outcry as it might have in Florida or at Ohio State.

Meyer, it seems, has a lot to learn about coaching at football’s top level.

He didn’t do himself any favors by making it even more difficult before his team has even played a game.