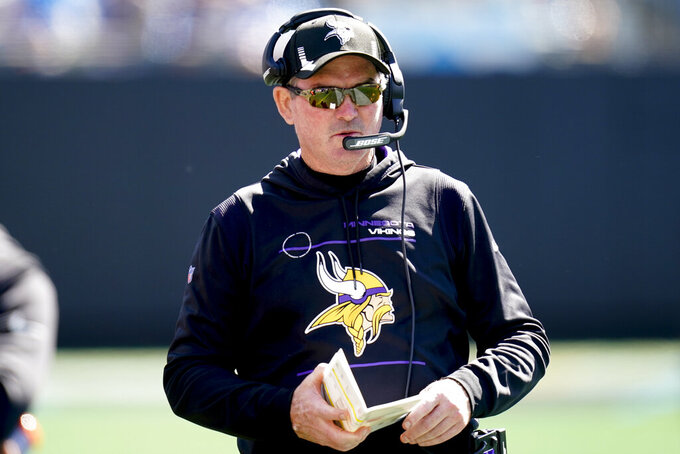 MINNEAPOLIS (AP) — Coach Mike McCarthy has another first-place, high-scoring team he's taking to Minnesota for a prime-time game in a sure-to-be raucous environment, with fans riled up about the prospect of a signature Vikings victory against a longtime franchise nemesis.

The Green Bay Packers? They'll probably be watching on TV, wrapping up a restful weekend after playing the NFC-leading Arizona Cardinals.

The Dallas Cowboys, of course, are under McCarthy's direction these days. After a rough first season together that was spoiled by quarterback Dak Prescott's broken ankle and the stress of COVID-19, they're thriving with a 5-1 record that's dominating the underwhelming NFC East.

The Vikings (3-3) have the ability to keep up with a formidable offense of their own when they meet Sunday night in the NFL's national showcase game. They'll have the advantage of the distracting crowd noise. They've got a proven defensive strategist on their side with coach Mike Zimmer, too.

“He always makes you work more than the norm,” said McCarthy, who is 8-6 at Minnesota after 13 years with the Packers, plus a 31-28 win by the Cowboys last season at U.S. Bank Stadium with no crowd due to the virus.

The Cowboys employed Zimmer for 13 years, including as defensive coordinator from 2000-06. His former team has given him and his staff plenty of work over the last two weeks, with the bye providing previous extra time to plot against an offense that leads the league with averages of 6.58 yards per play and 34.2 points per game.

Prescott's status is uncertain because of a calf strain suffered on the touchdown pass he threw to beat New England in overtime on Oct. 17. He has been practicing on a limited basis and made clear he's fully confident he'll be healthy enough to play.

The Cowboys, with an unspoken eye toward their weak division, will be plenty cautious with their assessment to ensure he's not vulnerable to reinjury.

“It’s a journey, and I want to be playing in that last game,” said Prescott, the first Cowboys player with at least three touchdown passes in four consecutive games. “It’s not fully my decision, because there is a bigger picture. It is more than just this one game.”

The ultimate call whether Prescott plays lies with McCarthy and Britt Brown, the team's associate athletic trainer and director of rehabilitation. Prescott spent plenty of time with him after the broken ankle and became friends with Brown as a rookie in 2016.

“Whether that’s getting us ready to go for the games or making the calls in me playing this week," Prescott said, “he takes a lot of pride in what he does, and he does his job as well as anybody does.”

“It was like school had been out for the summer a little bit,” Zimmer said of the workout on Monday. “I had to kind of rein them back in and tell them I wasn’t pleased with where they’re at.”

Cowboys defensive end Randy Gregory said his unit was messing up alignments on Wednesday. Tight end Dalton Schultz said it “wasn’t a super-crisp day” with players “kind of knocking the rust off a little bit” after the break.

“It just felt like going through the motions a little bit,” Schultz said, adding: “This point of the season, we can’t just really afford to have a day like that.”

McCarthy-coached teams are 10-4 after their bye week. Zimmer's Vikings are 3-4.

GETTING RID OF IT

Vikings quarterback Kirk Cousins has been sacked only nine times through six games, and the team's rate (3.75%) of sacks per pass attempt is fifth best in the league. Cousins is also fifth in the league, according to the NFL's Next Gen Stats, with an average time to throw of 2.64 seconds per attempt.

“From a play-calling standpoint, we’re not trying to put ourselves in a position where we’re taking sacks, and I think that’s probably the biggest thing,” Cousins said. “From game to game, play to play, it’ll change, but we’re aware of trying to avoid them and, really, it takes the whole group.”

Cowboys cornerback Trevon Diggs has a league-leading seven interceptions, joining Pro Football Hall of Fame member Rod Woodson (1993) as the only players since the 1970 merger with that many in the first six games. If Diggs picks off Cousins, he'll break the NFL record for the longest stretch of consecutive games with an interception to start a season.

“The way he plays, we knew he could be special," said Vikings safety Xavier Woods, who was with the Cowboys the last four seasons. “Did I see seven interceptions? No one sees that, but you know he can go get the ball. He has ball skills like no other.”

Terence Steele began the week as the starting right tackle for the Cowboys despite the return of La’el Collins from a five-game suspension for violating the NFL’s substance abuse policy. Steele replaced Collins, just as he did last year as an undrafted rookie when Collins had hip surgery and missed the entire season.

Steele is getting rave reviews after an offseason dedicated to getting stronger. He was pushed around quite a bit in 2020, when the Cowboys had other issues with injuries on the offensive line. Collins is working at both right tackle and left guard, meaning he could eventually replace Connor Williams, who had a rough game against the Patriots.

“You clearly have to recognize how well Terence played,” McCarthy said. “Continuity of the offensive line is something that you’re always striving to sustain over the course of the year. But also, I think this gives us the most competitive, the most depth that I’ve had in my time here.”