Engram gets crack at former team when Jaguars host Giants 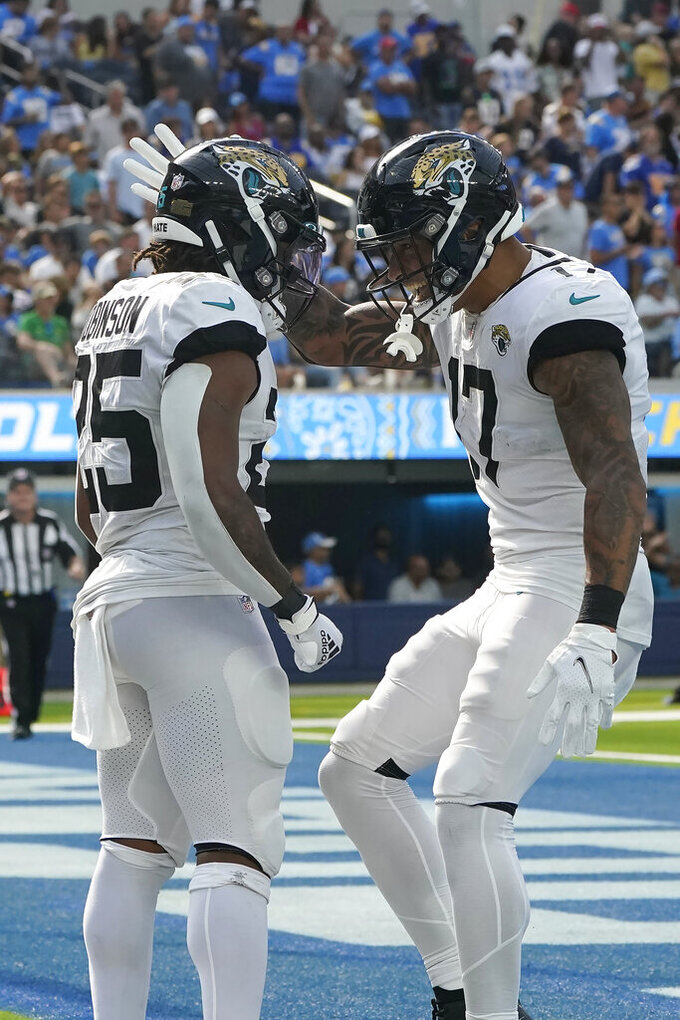 Jacksonville Jaguars running back James Robinson, left, is congratulated by tight end Evan Engram after scoring against the Los Angeles Chargers during the second half of an NFL football game in Inglewood, Calif., Sunday, Sept. 25, 2022. (AP Photo/Marcio Jose Sanchez) 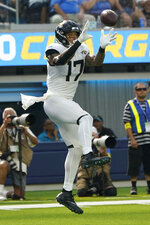 The Jacksonville Jaguars tight end spent the first five years of his NFL career in the Big Apple, playing for the Giants. It was overwhelming at times, especially during the four seasons that followed a stellar rookie year in which he caught 64 passes for 722 yards and six touchdowns.

Engram never topped those 2017 numbers, and endured his share of criticism for dropped passes, injuries and all the losing the Giants endured during his tenure.

Now Engram gets an up-close look at his former team when the red-hot Giants (5-1) play Sunday at reeling Jacksonville (2-4), which is a three-point favorite despite losing an NFL-record 18 consecutive games against NFC teams.

“There definitely will be a little something-something,” Engram said. “I’ve got to stay locked in and just stay focused on what I got to do for the team. But it will definitely be all in fun.”

Engram signed a one-year, $9 million contract with Jacksonville, essentially betting on himself to have a big year and land an even bigger payday. He has 24 receptions for 208 yards this season, with more than half that yardage coming in the last two weeks.

He’s still looking to find the end zone for the first time with the Jaguars — something he did 17 times with New York — but seems to be finding a rhythm with second-year pro Trevor Lawrence.

“He’s done some really good stuff for us, and I think our connection is great,” Lawrence said. “We would both like to see that get better and better for the stats and the catches and all the big plays to come, but I have no doubt that’s going to happen.”

Engram would love to see it happen this week, against so many guys he knows so well.

“Practicing with those guys, playing with those guys the last five years, it’s just weird,” he said. “I do know a lot of those guys still over there and they’re having success. They’re one of the best teams in the league, and we’ve got an opportunity to go beat them.”

Engram said the biggest difference between New York and Jacksonville is “probably nightlife.” He admitted the big-city scene was “a lot to kind of fall into.”

Engram felt he needed a change of scenery to better his career — and maybe his personal life. He’s planning to get married next April.

“It was good for me just ’cause I felt like I’m in this spot in my career where it’s time to lock in,” he said. “I’m about to get married and settle down. It’s a good spot to be focused and go win football games. That was kind of my outlook on it. I did love New York. I loved being there. It was a great city to play football in, but God has me here right now and I’m blessed to be here.”

The Giants are the only team in the NFL to overcome three deficits of 10 or more points and win this season. They did it against Tennessee in the opener, versus Green Bay in London two weeks ago and last Sunday against Baltimore. The last time the Giants posted consecutive wins in rallying from 10-plus-point deficits was 2016.

The Giants are getting significant contributions from rookies. Linebacker Kayvon Thibodeaux, the fifth overall in the draft, had his first sack and forced a fumble against the Ravens. Right tackle Evan Neal, the seventh pick, has started every game. Second-round receiver Wan’Dale Robinson, who missed four games because of a knee injury, caught his first touchdown pass against Baltimore. And tight end Daniel Bellinger, a fourth-round selection, has a team-high two TD catches.

Jacksonville’s top draft pick, edge rusher Travon Walker, is going through some growing pains. The No. 1 overall choice hasn’t had a sack since Week 1 and has one QB hit in the last four games. Adding to his woes, he was flagged for third-down penalties in consecutive weeks. Both flags extended drives and led to touchdowns.

“What you’re seeing is teams are aware of him and scheming protection towards him,” Jaguars coach Doug Pederson said. “He’s gaining the recognition and respect of the opponents, but at the same time, he needs to understand, he can’t get frustrated.

“He’s got to continue to work and find ways to create rush and play within himself. He’s a good player and only going to get better. These are great learning experiences. There were two penalties I know he would love to have back, and he’ll learn. Sometimes you learn the hard way, and that’s what he’s going through right now.”