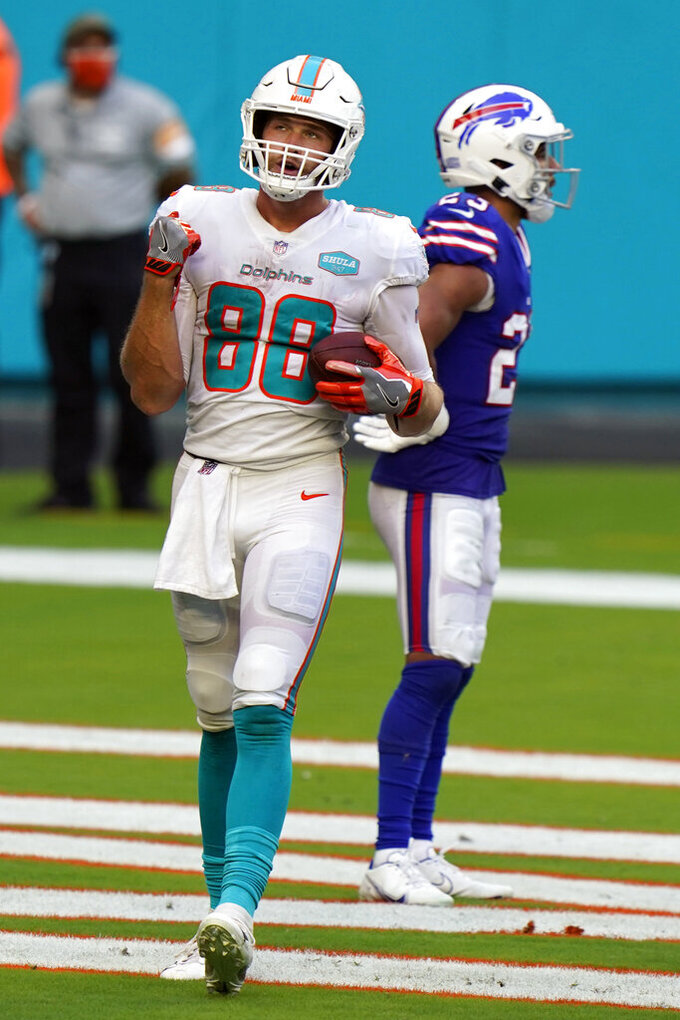 Miami Dolphins tight end Mike Gesicki (88) celebrates his touchdown during the second half of an NFL football game against the Buffalo Bills, Sunday, Sept. 20, 2020 in Miami Gardens, Fla. Against Buffalo the 6-foot-6 Gesicki had eight catches for 130 yards, both career highs. (AP Photo/Wilfredo Lee)

Fantasy football owners who didn’t lose a key player on their rosters in Week 2 were few and far between.

The Giants' Saquon Barkley and Denver's Courtland Sutton were both lost for the season while Carolina's Christian McCaffrey could be sidelined 4 to 6 weeks.

Davante Adams joined Michael Thomas and Chris Godwin among the elite receivers on the sidelines, and the 49ers lost lead back Raheem Mostert along with enduring season-ending injuries to defenders Joey Bosa and Solomon Thomas.

If ever there was a week to dive headfirst into the waiver wire, now is the time.

MIKE DAVIS, RB, Panthers: Coach Matt Rhule has faith in Davis, who had only one carry for 1 yard but did have eight receptions for 74 yards after replacing McCaffery. Davis was the only Panthers running back to see significant time after McCaffrey's injury, which means he’ll likely own a 85%-95% rate in snap counts. It’s impossible to replace the consensus first overall pick in fantasy drafts, so while Davis is capable of doing a reasonable job, don’t have huge expectations. With the Panthers likely playing from behind most weeks, Davis makes for a good flex option in PPR formats.

DEVONTA FREEMAN, RB, Free Agent: He may not be the back who accounted for 2,135 rushing yards and 22 touchdowns for the Falcons in 2015-16, yet Freeman may be back with a team. The Giants could be interested after losing Barkley. Also keep in mind that Freeman is also a solid receiver out of the backfield, having had three seasons of at least 50 receptions. If he does sign with the Giants, be patient with Freeman, who will need a couple of games to shake off the rust.

DARRELL HENDERSON JR., RB, Rams: Malcolm Brown held a 54%-42% snap count edge over Henderson, but it was the second-year back who ended up with 12 carries for 81 yards and a touchdown in the Week 2 win over the Eagles. Henderson also added two catches for 40 yards and will see a larger role in the offense now that rookie Cam Akers (ribs) could be limited. Brown also broke a finger late in Sunday’s win, which could mean more touches for Henderson, who could develop into a mid-tier RB2 if he makes the most of his opportunity.

WAYNE GALLMAN/DION LEWIS, RB, Giants: For now, don’t assume the Giants will add Devonta Freeman. With that in mind, it looks as if Lewis (95% snap count post-Barkley injury) will get the lion’s share of touches, which bodes well in PPR formats in deeper leagues. That said, don’t dismiss Gallman, who was a scratch in Week 2. Gallman is the bigger of the two backs, making him the choice in short-yardage situations. Both backs should be scooped up off the waiver wire, but give Lewis the edge here.

MIKE GESICKI, TE, Dolphins: Gesicki could spend the season as a frequently targeted TE, who is also showing signs of being a TE1. Gesicki averages 14.5 yards per catch and will be the first option near the goal line for a Dolphins offense lacking a running threat. Among the Week 2 waiver wire choices, Gesicki has the best chance to develop into a must-start option on a weekly basis.

ALLEN LAZARD, WR, Packers: Lazard has caught seven of his nine targets for 105 yards and a touchdown and will be a must-grab as the Packers face a Saints defense that gave up three touchdown passes to Raiders quarterback Derek Carr on Monday night. Davante Adams is dealing with a hamstring injury, leaving his Week 3 status in doubt. That opens the door for Lazard, who has had at least one reception of better than 25 yards in both games this season. If Packers teammate Marquez Valdes-Scantling isn’t available on the waiver wire, don’t hesitate to add Lazard, who will thrive with the resurgent Aaron Rodgers firing in his direction.

MECOLE HARDMAN, WR, Chiefs: Hardman, who caught two of his three targets for 30 yards during the overtime win at the Chargers, could get more chances if Sammy Watkins misses the game. Hardman has game-altering speed and while he could be the third option for Patrick Mahomes, Hardman can change the complexion of a game and the fortunes of fantasy owners with only a play or two. He’s a good add to the roster and makes for a worthy WR3/flex option.

DALTON SCHULTZ, TE, Cowboys: Week 2 was a breakthrough moment for Schultz, who pulled in nine of 10 targets for 88 yards and a score in Sunday’s win over the Falcons. Dallas is loaded with offensive options, but Schultz could be good for 5 to 7 targets per game.

KEELAN COLE, WR, Jaguars: Cole has scored in each of the first two games while pulling in 11 of his 12 targets. Surprisingly, Cole has been targeted more than D.J. Chark, and if that trend continues, Cole will develop into a sneaky good WR3/WR4 who can be utilized according to the weekly matchup. Thursday’s game against the Dolphins would make for a good example.

JERICK MCKINNON, RB, 49ers: McKinnon had 77 yards rushing and a touchdown in the Week 2 win at the Jets and will likely see considerable action in Week 3 with Raheem Mostert and Tevin Coleman expected to be sidelined. McKinnon has a injury history, but Sunday’s 55-yard run is a reminder of how potent he can be when given the opportunity. Consider him a solid flex option in deeper leagues who is worthy of an upgrade in PPR formats.