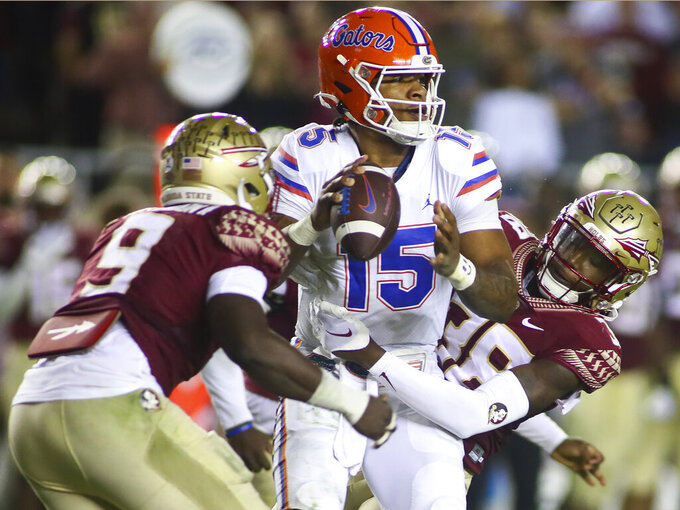 GAINESVILLE, Fla. (AP) — Florida quarterback Anthony Richardson, who is considered more of a long-term project than a slam-dunk prospect, will leave school early and enter the NFL draft.

Richardson thanked just about everyone who had a role in his college career, including coach Billy Napier and his staff for “molding me into the player and person I am today.”

Florida defensive tackle Gervon Dexter also announced plans to enter the draft and could be the first Florida player selected in April.

Many considered Richardson a Heisman Trophy candidate following his stellar performance against then-No. 7 Utah in the team’s season opener, a three-touchdown outing that started season-long speculation about Richardson’s first year as Florida’s starter being his last.

But the third-year sophomore ended up being more inconsistent than proficient at the all-important position. He completed 53.8% of his passes for 2,549 yards, with 17 touchdowns and nine interceptions. He also ran for 654 yards and nine scores. He was sacked 14 times and fumbled twice.

His completion percentage was the lowest for a starting quarterback at Florida since Treon Harris in 2015.

Nonetheless, Richardson undoubtedly has NFL potential. The 6-foot-4, 232-pound Gainesville native is mobile and has a big-time arm. He’s made plays all season passing and running, but he often struggled trying to complete routine throws.

Staying healthy had been a concern, but Richardson started every game and took the majority of the snaps to prove his durability.

Still, he’s likely to land in the league with a team that has no plans to play him right away. Several scouts have said he would be best served starting his professional career as a backup and without the pressure of playing as a rookie.

Alabama's Bryce Young, Ohio State's C.J. Stroud and Kentucky's Will Levis are expected to be the top QBs in the draft, although only Levis has already declared.

The Gators (6-6), meanwhile, are likely to find his 2023 replacement in the transfer portal. Although four-star recruit Jaden Rashada flipped his commitment from Miami and Florida in early November, he’s unlikely to start as a freshman. Another QB recruit, Marcus Stokes, had his scholarship offer pulled after a clip surfaced on social media of Stokes using a racing slur while singing a song.

Without Richardson and Kitna moving forward, the Gators will have Engel, Miller and true freshman Max Brown available for their bowl. Only Miller has any college experience. He completed 7 of 14 passes for 101 yards with the Buckeyes in 2021.