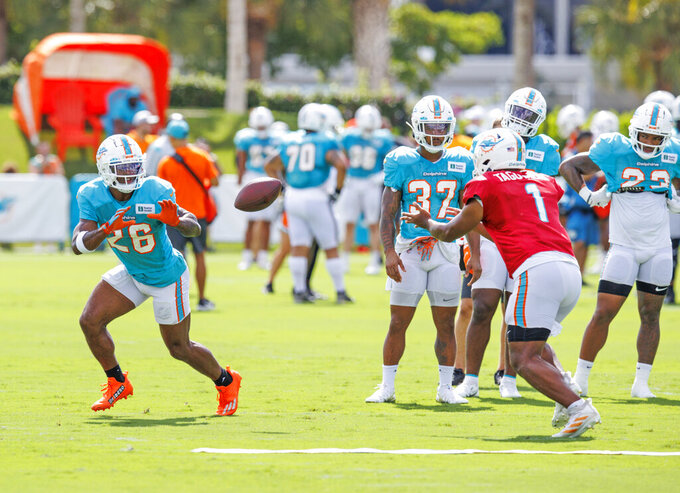 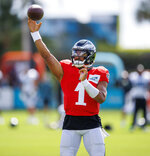 MIAMI GARDENS, Fla. (AP) — During the special teams period of Wednesday’s joint practice between the Eagles and the Dolphins, the quarterbacks from both teams gathered on the Dolphins practice field.

Among them were Tua Tagovailoa, Miami’s starter, and Jalen Hurts, Philadelphia’s starter, both wearing red jerseys with the No. 1 on the back.

“I talked to him during practice. They were telling me it was hot,” Tagovailoa later joked.

The two have been linked since their time as Alabama quarterbacks. And in their young careers, they have used each other as resources to navigate the NFL landscape.

Tagovailoa and Hurts, both entering their third NFL seasons, are at a pivotal juncture: This is the year that they both need to show they can lead their respective franchises for the foreseeable future.

“I remember last season, we’d been texting each other quite a large amount,” Tagovailoa said after Wednesday’s practice. “For me, when I ended up playing the Saints, he played the Saints prior. I texted him about that. He gave me some tips. He texted me about playing another team. I gave him some tips.”

The next day, Hurts was asked about how his relationship with Tagovailoa has grown.

“The friendship we have and being able to talk about who we’re seeing in the league and just being a companion throughout the process of that,” Hurts said, “I want to see him win, and I know he wants to see me win.”

The Dolphins and Eagles haven’t played each other since Tagovailoa and Hurts became starters. Miami and Philadelphia will face off in Saturday’s preseason finale at Hard Rock Stadium, though it’s unlikely that either team’s starters will play much, if any.

Hurts, who was the Crimson Tide’s quarterback for two seasons (2016-2017) was drafted by the Eagles 53rd overall in the second round of the 2020 draft. He sat behind Carson Wentz for much of his rookie season before replacing a struggling Wentz in Week 13.

Tagovailoa replaced Hurts after halftime of the national championship game against Georgia in the 2017 season and took over as Alabama’s starter afterward. He said that competing with Hurts and the rest of the players in Alabama’s quarterback room helped prepare him for the NFL.

“The dude had to be the first into the weight room. He had to be the first out onto the field. Like sprints, he had to be first,” Tagovailoa said of Hurts. “So it really tells you how he goes about his life. It tells you about how he kind of sees things and how he looks at things. Obviously he’s a competitor. He never wants to be last, so that should tell you a lot about him.”

Hurts, known for his strength as a runner even in college, showed improvement as a pocket passer last year, his first full season as a starter.

Hurts threw for 3,144 yards and 16 touchdowns with nine interceptions last year. He led the team in rushing yards (784) and rushing touchdowns (10). Now, he has to prove that he can take the next step to lead Philadelphia’s offense with his legs and his arm.

And he is in a great position to do so, with one of the league’s best offensive lines and an elite receiving group that includes A.J. Brown and former Crimson Tide receiver DeVonta Smith.

Eagles coach Nick Sirianni said Hurts has shown improvement in his vision and decision-making throughout training camp, adding that his session against the Dolphins Wednesday was his best practice since joining the franchise.

“What he was doing with the football and being able to go through reads and the progressions that fast and getting the ball to where it needed to go, I thought, was unbelievable,” Sirianni said.

Tagovailoa said he cherishes his relationship with Hurts and the other members of the Crimson Tides quarterback room, including Mac Jones, now the Patriots starting quarterback.

He was drafted No. 5 overall by the Dolphins in 2020. And whereas Hurts was initially intended to be a solid backup option for Wentz, Miami drafted Tagovailoa to rejuvenate its franchise.

That hasn’t panned out completely yet, but the team hopes that its new-look offense that includes receivers Tyreek Hill, Jaylen Waddle and Cedrick Wilson Jr., and its experienced defense will yield the results it has been looking for: a deep playoff run.

Last season, Tagovailoa threw for 2,653 yards and 16 touchdowns with 10 interceptions, completing 67.8 percent of his passes. But Dolphins first-year head coach Mike McDaniel has lauded Tagovailoa's command of the offense throughout training camp.