Giants owner John Mara says everyone is on the hot seat 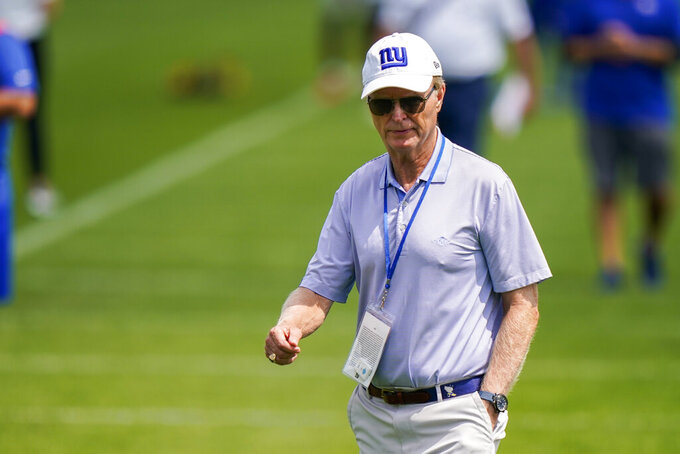 FILE - New York Giants president and CEO John Mara looks on at NFL football training camp in East Rutherford, N.J., in this Wednesday, July 28, 2021, file photo. Giants owner John Mara is sick of losing and expects it to change. Giving his annual preseason state of the team talk on Tuesday, Aug. 17, 2021, Mara said the team made progress in Joe Judge's first season, better on paper heading into 2021 and now needs to prove it by winning.(AP Photo/Corey Sipkin, File)

Giving his annual preseason state of the team talk on Tuesday, Mara said the team made progress in Joe Judge's first season and it looks better — at least on paper — heading into 2021. Now it needs to prove it by winning.

The Giants have not had a winning season since 2016, when they went 11-5. It's the only time they made the postseason since winning the Super Bowl in February 2012. Over the past four seasons they have won 18 games, including a 6-10 mark last season.

“We’re all on the hot seat, with our fans in particular," Mara said when asked if general manager Dave Gettleman was facing a must-win season after winning 15 games in his three seasons. “We've given them too many losing seasons. It’s time for us to start winning.”

Gettleman and Mara see a better team in training camp, but the end product needs to be there.

Gettleman believes the Giants are a legitimate playoff contender.

“I’m not issuing a playoff mandate,” Mara said. “I don’t think those ever do you any good. I don’t think I need to say or do anything to motivate the people in this building any more than they’re already motivated. They all want to win.”

The 66-year-old chief executive also said things will have to be re-evaluated if the team takes a step back in this 17-game season.

Mara continues to show unwavering belief in Judge, noting the 39-year-old coach exudes confidence, the players respond to him and he sees the big picture.

“I’m convinced that we have the right guy at the helm,” Mara said.

Mara spoke on a number of other topics, including possible upcoming negotiations with quarterback Daniel Jones and running back Saquon Barkley, who is returning after missing most of last season with an ACL injury.

Jones will be entering his third season and many people are hoping he starts playing like a quarterback capable of leading a team to a title.

While the No. 6 pick in the 2019 draft has been inconsistent, he has more skill players on offense to help him, including big free agent signee Kenny Golladay at wide receiver.

Mara said the coaches love Jones' work ethic and leadership, He just wants to see that translate to more wins.

Barkley simply needs to get back on the field and play like his first two seasons, when he gained at least 1,000 yards rushing.

“Our medical people feel very good about where he’s at right now,” Mara said of Barkley. “I like what I’ve seen from him out on the field and hopefully that’ll be an easy decision for us as well.”

Gettleman and Mara agreed the offensive line has the talent to be good but only time will tell.

The Giants open the season on Sept. 12 at home against the Denver Broncos.

While COVID-19 numbers are on the rise in New Jersey, Mara said he still expects fans will be allowed to fill the stadium. Currently, there is no need for them to show proof of vaccination, although that could change.

Mara said currently well over 90% of the players are vaccinated along with everyone working for the organization.