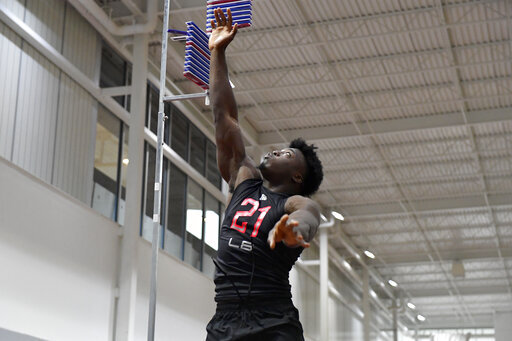 The 70-year-old New York Giants general manager highlighted the second day of the draft by making two more deals Friday night. He traded down in the second round to take Georgia edge rusher Azeez Ojulari and traded up in the third to grab Central Florida cornerback Aaron Robinson.

Gettleman started off the draft on Thursday by shipping the No. 11 pick to Chicago and using the Bears’ first-rounder at No. 20 to take Florida receiver Kadarius Toney.

The Bears selected Ohio State quarterback Justin Fields at No. 11, while the Giants (6-10) got the 20th pick, a fifth-round pick this year, and first- and fourth-round selections next year.

“Listen, it’s all about if the opportunity is right,” Gettleman said Friday. “It’s about your board. It’s about value meaning needs. It’s all those things. Like I told you guys last week, I’ve tried in the past and it just hasn’t worked. We felt we got just really good value here. ”

Chris Pettit, the team's director of college scouting, said Gettleman, who had never traded his first-round pick, took some kidding in the Giants' war room after the moves.

“Trader Dave is hearing it from a lot of people throughout the league, so it’s been fun,” Pettit said. “There's been a little ribbing. But like I said, it’s not like we haven’t tried. Dave said it, I’ll say it, but it worked out. But it’s exciting.”

The Giants were supposed to pick 42nd in the second round but moved down in a deal with Miami for the Dolphins' pick and an extra third-round pick in 2022. They took Ojulari at No. 50.

The son of Nigerian immigrants, Ojulari had 8 1/2 sacks, four forced fumbles and a fumble recovery. He had 14 sacks over the past two seasons.

There were some concerns about Ojulari because of a knee problem, and it might have caused him to slip in the draft. He said the knee is fine and he will be looking to show he is one of the best pass rushers in the draft.

“I'm definitely relentless,” Ojulari said. “Effort is never a question. I'm an all-around player, rush the passer, stop the run, drop in coverage. Whatever I have to do to help the team, I can do it.”

Ojulari should feel at home with the Giants. His roommate in college was current tackle Andrew Thomas, New York's first-round pick in 2020. Former Bulldog defensive teammates Lorenzo Carter and Tae Crowder also are on the team.

In the deal with Miami on Friday, the Dolphins took Notre Dame tackle Liam Eichenberg at No. 42. Miami gave the Giants the 50th pick and a third-round choice in 2022.

The Giants were supposed to pick 76th in the third round and made a deal with Denver to move up to No. 71 when they thought they might lose Robinson.

Robinson started his career at Alabama and transferred to Central Florida after his freshman season. He is fast and can play either in the slot on on the outside. This past season he started nine games and had 41 tackles with one forced fumble and one recovery. He led the team with seven pass breakups.

“The best defenses have the best tackling secondaries, and Aaron Robinson is a really good tackling corner," Gettleman said.

The Giants sent their third-round pick at No. 76 and the fifth-round pick this year to the Broncos. The fifth round was the one New York acquired from Chicago on Thursday in the first trade.

The Giants will head into the final day of the draft with three picks and they need an offensive lineman, a defensive tackle and maybe a young running back.