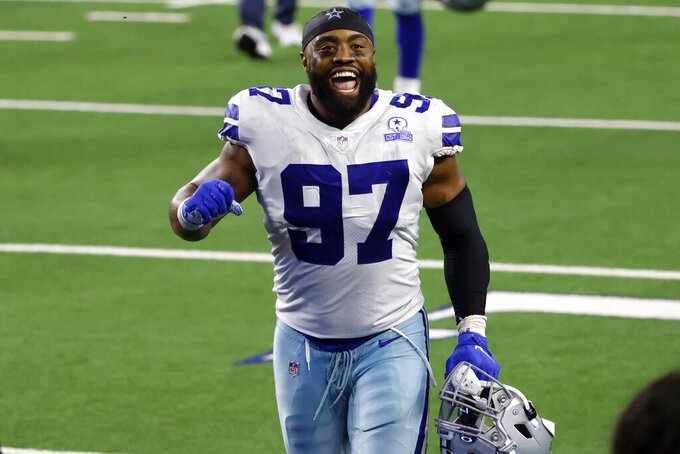 FILE- In this Sunday, Oct. 11, 2020, file photo, Dallas Cowboys defensive end Everson Griffen (97) celebrates after winning an NFL football game against the New York Giants in Arlington, Texas. Griffen's debut with the Detroit Lions will come against a former team the Minnesota Vikings. Griffen played 10 seasons with the Vikings from 2010-19. He was with Dallas this season before the Lions acquired the defensive end in a trade last week. (AP Photo/Ron Jenkins, File)

DETROIT (AP) — Everson Griffen's debut with the Detroit Lions will come against a former team.

It's fair to say he's ready.

That last part of that comment was said with dripping sarcasm. Earlier this week, Minnesota coach Mike Zimmer said of Griffen: “Everson was a good player for us. I wish him well, just not this week."

“Coach Zimmer just wasn’t a good coach — he was a great coach to me," Griffen said. “So for him to call me a good player, that kind of hurts my feelings. So on Sunday, I’m really looking forward to playing the Vikings and showing them that I am a great player."

Griffen showed his irritation throughout his video conference with reporters Thursday.

“I don’t ever talk bad about people, so for him to call me a good player, all right," he said. "I got something for him on Sunday.”

Griffen played 10 seasons with the Vikings from 2010-19. He was with Dallas this season before the Lions acquired the defensive end in a trade last week with the Cowboys. Detroit plays at Minnesota this weekend.

Following the trade, Griffen wasn't able to practice or play until this week because of COVID-19 protocols.

Griffen said moving around from team to team recently has been a lot for his family to deal with. He joins Detroit right as the Lions are preparing to play without defensive end Trey Flowers, who went on short-term injured reserve this week.

“My role here at the moment is go win,” Griffen said. “Go win my individual battles, go execute my assignment. Get my guys lined up, and go out there and help them win too.”

Griffen's return has been a big topic in Minnesota, and the Vikings can certainly appreciate his ability.