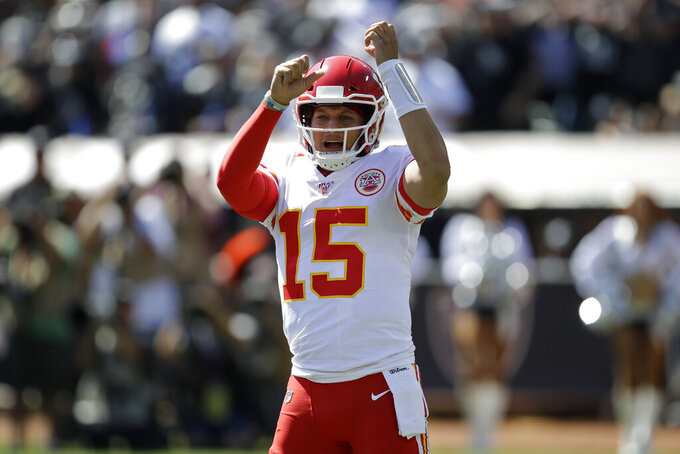 Kansas City Chiefs quarterback Patrick Mahomes (15) yells before a play during the first half of an NFL football game against the Oakland Raiders Sunday, Sept. 15, 2019, in Oakland, Calif. (AP Photo/Ben Margot)

KANSAS CITY, Mo. (AP) — Patrick Mahomes and the high-flying Kansas City Chiefs have been the talk of the NFL for months, their innovation and points-a-plenty style making them one of the league's most entertaining offenses.

They might not even be the best one on the field Sunday.

That's because for all the gaudy numbers the Chiefs hung on Jacksonville and Oakland in roaring to a 2-0 start, Lamar Jackson and the Baltimore Ravens have been even more prolific.

They lead the league in total offense and points; Kansas City is merely third and fourth. They also lead in time of possession and rushing, they're fourth in passing and third-down percentage rate, and like the Chiefs they have yet to turn over the ball this season.

So what is making it all click for Jackson and the Ravens?

"He's does a lot of things well," Chiefs coach Andy Reid said. "Everyone kind of goes to his run game but he can throw the football. He's doing it with accuracy and he can do it all different levels, whether that's rolling out or in the pocket.

"He has talent around him for sure," Reid added, "but the way it's slowed down for him, his reads are great and all those little things end up being big things."

Just ask Mahomes, who mastered so many of those little things while rolling to league MVP in his first season as the Chiefs' starter. And all he's done for an encore is throw for 821 yards and seven TDs without an interception through the first two weeks of his season.

In other words, Mahomes vs Jackson should be a compelling game-within-a-game on Sunday.

The Chiefs rallied downfield in the final minute of regulation, Mahomes converting a fourth down with an audacious throw to Tyreek Hill before finding Damien Williams for the tying touchdown. Harrison Butker added the winning field goal in overtime in a crucial December matchup.

"Of course we'll watch last year's game," Ravens coach John Harbaugh said, "but teams change so much, and they watch the game, too. So it's always a new game. ... You try to predict something and all of a sudden it gets blown up in your face. That, to me, is the beauty of this league."

As two of the AFC's top teams prepare to meet at Arrowhead Stadium, here are things to know:

The Chiefs, already missing Hill to a broken collarbone, are without left tackle Eric Fisher after he underwent core muscle surgery earlier this week. They also could play without Williams (knee) and fellow running back LeSean McCoy (ankle), who have been hobbled by injuries.

Yet nobody on the Kansas City sideline sounds too concerned.

"We have depth everywhere," Mahomes said. "We have guys that can come in and do the job."

Ravens tight end Mark Andrews leads the team with 16 catches, has a pair of 100-yard games, has scored twice and has a knack for making a big play on third down.

"He knows how to get open," Harbaugh said. "Mark has really showed up the last two weeks."

There are times when Andrews will even alter the pattern to get open. If there was a lamppost and a car on the field, Andrews would find the seam between them — "I tell Mark all the time, 'We're going to play street ball,' and that's what the case is," Jackson said.

Punter Dustin Colquitt is accustomed to the old-man jokes as the 37-year-old elder-statesman in the locker room, and he's heard plenty of jokes about never having to work given the way Kansas City has piled up points the past couple seasons.

In fact, Colquitt didn't get to punt at all during a Week 1 win over the Jaguars, though the two-time Pro Bowl selection held for plenty of field goals and extra points.

You might think that would make for an easy life, but Colquitt said it's the total opposite.

"Any time you're not working so much, every kick, snap, hold is more under the microscope," he explained. "It's fun watching that offense, but you can't get too caught up in it."

After starting his NFL career with Baltimore, outside linebacker Pernell McPhee played 60 games over four seasons with the Ravens before spending three years in Chicago and another with the Redskins.

Now he's back where he started after signing as a free agent in May.

"It feels great. I'm back home in Baltimore," said McPhee, who won a Super Bowl ring with the Ravens in 2012, and who has five tackles the first two games this season. "This is the team that raised me. I'm trying to get back to the playoffs and win it all, that's it."

One week after Reid matched wits with good buddy Jon Gruden in Oakland, he must do the same with Harbaugh, who learned the craft while coaching under him in Philadelphia. The two have remained close friends during their years apart, and Reid was giddy when Harbaugh won a Super Bowl title.

"He's a phenomenal coach," Reid said. "I love playing against him because I know they're well-coached and they have good players. We do this for the challenge, that experience on Sundays. I always look forward to playing those guys."