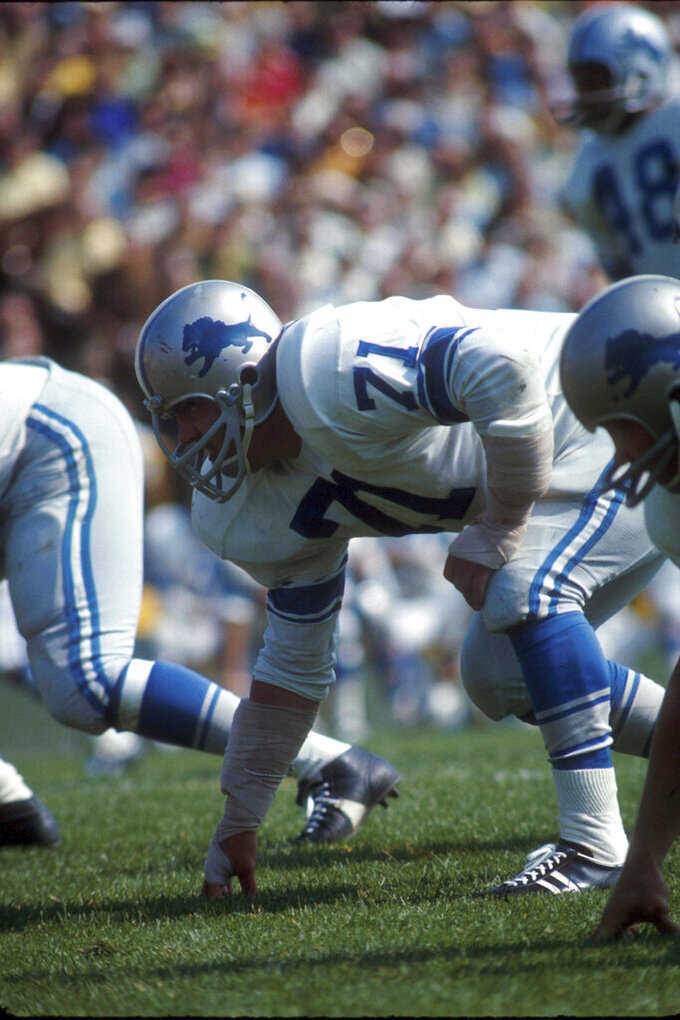 FILE- In this undated file photo, Detroit Lions defensive tackle Alex Karras is shown. A dozen seasons as one of the most feared pass-rushers in the NFL turned out to be just an opening act for Alex Karras. Better late than never, Karras will be formally enshrined as part of the Hall’s Centennial Class of 2020. (AP Photo/Vernon Biever, File) 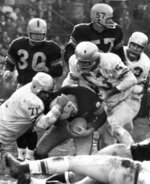 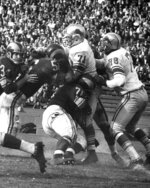 A dozen NFL seasons packed with All-Pro roughhousing, easy celebrity and lots of laughs would be a fulsome career for any man. That was just Alex Karras’ opening act.

Karras was a natural in front of the camera, whether crumpling quarterbacks on a muddy field in Detroit or spilling locker-room secrets across the desk from Johnny Carson on “The Tonight Show.” After his final season in 1970, he didn’t stay benched for long.

Karras put that tough-guy image and excellent timing to good use, launching a second career that introduced him to a new generation. He was a part-time pro wrestler, sportscaster, popular TV series guest, co-star of a hit sitcom, “Webster,” and all the while, a movie actor with credits ranging from “Against All Odds” to “Victor/Victoria” and perhaps most memorably to “Blazing Saddles.”

For all the acclaim that followed, Karras died at age 77 in 2012 without one of the honors he coveted most: a bust in the Pro Football Hall of Fame.

Better late than never, Karras will be formally enshrined as part of the Hall’s Centennial Class of 2020. During a small ceremony at Canton, Ohio, in April, Hall officials unveiled the bronze bust of Karras and handed it to his grandson.

“They let my son, Demos, lift it and place it on the spot where it will always be,” Carolyn Karras, one of Alex’s six children, said in a recent interview. “It brought a lot of closure.

“He knew he was good enough. To finally be in there with all those people,” she added, “I’m sure he’s very happy about it.”

Karras’ installment should put to rest years of speculation about why he wasn’t inducted sooner. Despite being one of the game’s most-feared defensive tackles, some suggested the three-time All-Pro and four-time Pro Bowler was hamstrung by a run of bad Lions teams and only one playoff performance. Others said Karras’ criticism of team owners and his running battles with then-Commissioner Pete Rozelle may have played a role, too. Most agreed that his nearly year-long suspension in 1963 for betting on NFL games -- along with Green Bay Packers star running back Paul Hornung – made Karras a complicated choice. He didn’t help matters by refusing to show much contrition.

“He believed in fairness and he said what needed to be said, whether it was appropriate or not,” Carolyn Karras said. “And I’m not sure how, but I got this picture of him going into the hall stuck in my head. So I started finding out who the voters were. Two or three got back to me early on and were a great help.

“My argument was, ‘He bet on games, but never on his own team, and he wouldn’t kiss Pete Rozelle’s ass. So? Not every guy in the Hall of Fame lived a Hall of Fame life. C’mon, give him another look.’”

Her own football memories are snapshots from childhood: “Thanksgiving Day, in front of a tiny black-and-white TV. … Walking behind him on bring-your-kid-to-training-camp day. … Everybody looked big. But he looked enormous.”

Playing at 6-foot-2 and 250 pounds, Karras was indeed big for his time but small in comparison to NFL linemen today. His versatility, though, would have been a boon in any era.

“There is no other tackle like him,” Doug Van Horn of the New York Giants, a frequent opponent, said in 1969. “He has inside and outside moves, a bull move where he puts his head down and runs over you, or he’ll just stutter step you like a ballet dancer.”

Karras, the son of a Greek immigrant doctor and a Canadian nurse, grew up in Gary, Indiana and seemed destined to play football. Two older brothers, Lou and Ted, made the NFL ahead of Alex, and after a rough start at Iowa, he won the Outland Trophy his senior year, and the Lions made him the 10th overall pick in the 1958 draft. He turned out to be as dominant in the pros as he’d been in college.

Late in life, Karras struggled with dementia, as well as heart disease and cancer, and joined 3,500 other former players in filing concussion-related lawsuits against the NFL.

“Honestly, I thought he’d quit caring about the game a long time ago. But just before I went to Canton, my brother George told me a story,” Carolyn Karras said. “They were at Dad’s house in Malibu and watching a Dodgers game. It was a couple of years before he died. And at one point, Dad tells George, ‘I can guarantee you two things that will never happen:

“One, the Cubbies won’t win a World Series; and two, I won’t ever make it into the Hall of Fame.’”

Karras was wrong on both counts.